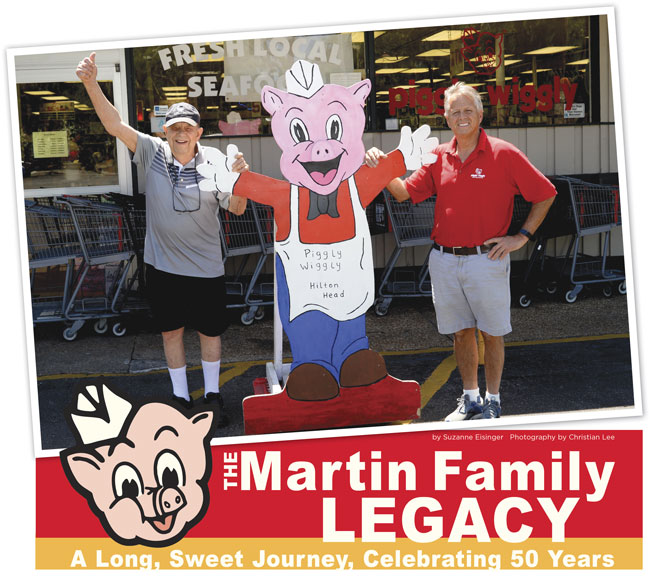 When Gene Martin and his family arrived on Hilton Head Island in 1969, there were only 2,000 permanent residents, Harbour Town was just being built, and Coligny Plaza was little more than a collection of stores supplying the basics. Yet, one store—a small Red and White Grocery—was their reason for coming. And while they couldn’t have known it then, it would set the stage for a 50-year family legacy.

In its early years, the store, now known as Piggly Wiggly, was half its current size and the only grocer serving the island. When its former owner retired, Gene jumped at the chance to buy it. Over time, he would expand the store, franchise the Piggly Wiggly name and survive the openings (and closings) of many competing groceries. Today, “The Pig” remains the longest continuously running grocery store on Hilton Head. But that’s only part of the story.

For Gene, who is originally from Allendale, SC, “life is what you make of it.” Unable to finish college himself, he is proud to point out that all four of his children graduated college and his ten grandchildren have, or are poised to do the same. These days, despite macular degeneration, Gene continues to work summers at the store, where he is responsible for its popular beach goods department. He isn’t sidelined by his limited vision, however. Remarkably, Gene takes inventory and reorders items relying on memory alone.

The Next Generation
David Martin was 10 years old when he moved to the island. And, with the exception of his college years, in which he earned a finance degree —and, more importantly, met his wife, Chris—he has remained rooted to Hilton Head ever since.

The decision to work for his father after graduation was a natural one. “Out of the four children, I was (at the store) the most, and I always liked it,” David said. He and Chris settled down and raised a family of their own—a daughter Kayla and son Austin, both now grown.  In 1999, Gene began transferring ownership to David, who now owns the store outright. Listening to David and his father speak, it is apparent the two men share a strong, mutual respect for each other. “He’s done one hell of a job,” Gene proudly remarks about David’s tenure at the store. “He’s done things that I would never have thought of doing.”

Such improvements include changes in merchandising, adding a beach goods section and, of course, ‘Pig Corner,’ a popular section devoted to all things Piggly Wiggly. David has also learned the value of listening to his customers, many of whom hail from the Northeast and seek items not normally seen in these parts. Years ago, he took a chance by being the first store in the state to sell Perrier water, a product that other groceries simply hadn’t considered. But his gamble paid off, and the Perrier flew off the shelves.

Piggly Wiggly is not just for out-of-towners, however. Locals and visitors alike praise the store for its fresh seafood from local suppliers in Bluffton and Beaufort. In fact, David is part-owner of a shrimp boat that ensures a ready supply of quality, fresh shrimp. And, while he is quick to admit he has never actually been on the boat, “You could call me Forrest,” he said with a grin.

“Action, Not Words”
For all of his contributions over the years, David is quick to turn the focus back to his father. “My dad taught me that you lead through action and not words,” he said. “We are just doing what he’s always done.”

Last year, when Gene was inducted into the Hilton Head Island Hall of Fame, entertainer Gregg Russell recalled a story of how Gene had personally helped him. It was the summer of 1976 and Charles Fraser had just offered him a temporary job entertaining at Harbour Town.Russell couldn’t afford to stay in a hotel, so, with Gene’s permission, he parked behind the grocery and ran an extension cord from his van to the store. Every few days, he would find a bag of sandwiches and drinks on the front seat. Gregg was never sure who had left it, but “I had a sneaking suspicion, with it coming in a Red and White grocery bag.” By summer’s end, Fraser permanently hired Russell, and the rest is history. “He’s just such a good guy,” Gregg said.  “He’s done so much for this community. The whole family has.”

Such generosity is nothing new.

Throughout their years, the Martin’s have extended in-house credit to island residents. However, during the economic downturn of the mid-1970s, this was more than just a convenience, it was a lifesaver to many area families who struggled to put food on the table. For families that were unable to pay, Gene simply told them to pay him back when they could.

When Hurricane Matthew hit Hilton Head in 2016, David and his wife remained on the island. The morning after landfall, they checked the store for damage and put a sign on the door, promising to open the next day. To their astonishment, 80 people awaited them when they returned. Armed with flashlights, order pads and pencils, and aided by friends who jumped in to help, they went to work, providing needed supplies to more than 250 people that day and many more in the days to come.

All About Family
Between siblings and grandkids and, of course, Gene, “sometimes there are six or seven family members working in the store at once,” Chris said. But, that’s not where the family ends. Employees—many of whom have worked for the Martin family for decades describe it as a second family who genuinely cares about them. One gentleman has been with them for 34 years and married his wife in the back of the store. “I was his best man,” Gene added, as if things like this happen all the time.

The Martins are also deeply committed to the island’s youth. Between “Bagging for Bucks,” in which youth groups are given the chance to bag groceries for tips, and the students who are a staple of the store’s workforce, Piggly Wiggly is never without the energetic presence of young people. Without exception, the teens who work at “The Pig” praise the store as a fun and welcoming place, where they look forward to coming to work.

Going Strong
Fifty years is a milestone few businesses can hope to reach, but through their commitment to customers, employees and the community, the Martins prove it can be done, and done well. So, how do they plan to celebrate their anniversary?

“Just like we’ve been doing,” David answered. “Quietly, humbly going about our business. When you’re young, you say, ‘I don’t want to be like my Dad’, but it turns out I’m just like him… and I’ve learned from the best.”