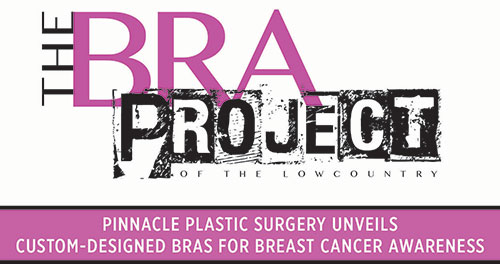 If you’ve ever been the recipient of a random act of kindness, then you understand how a simple gesture can go a long way.

It’s in that spirit that the grassroots charity DragonBoat Beaufort was formed. A group of Lowcountry breast cancer survivors developed the non-profit organization to provide much-needed support for local cancer survivors and their caregivers.

For the second year in a row, Pinnacle Plastic Surgery in Bluffton is hosting The BRA Project of the Lowcountry, an exhibit featuring student-designed bras that will help raise money and awareness for DragonBoat Beaufort. This year, students from Bluffton High School, Hilton Head High School and Savannah Arts Academy created custom bras that will be displayed at Pinnacle’s office.

There will be several opportunities to see the bras, which are fabulous works of art, including a stop at the Pink Partini on Thursday, October 8 from 5:30 to 8:00 at Mediterranean Harbour Bar & Grill in Shelter Cove. For a full list of dates, times and locations of the traveling exhibit, visit www.PinnaclePlasticSurgeryMD.com.

Pinnacle started The BRA Project last year as a way to recognize National Breast Cancer Awareness Month and garner support for survivors in the local community. Funds raised by the project are donated to DragonBoat Beaufort, which touches the lives of local cancer survivors by providing meals, hats, bandanas, handwritten cards and more, both during and after their treatments.

“Many of our patients are courageous breast cancer survivors, and we are proud and honored to have the opportunity to support them in such a unique fashion,” said Pinnacle’s Dr. Audrey Klenke, Beaufort County’s only female cosmetic and reconstructive surgeon.

More than a dozen students participated in this year’s design competition, but only six finalists were chosen to compete in the voting for grand prize. However, there was so much student talent that Pinnacle decided to have the runner-up bras displayed at local businesses.

“Each bra, whether it be a finalist or a runner-up, sends a strong message that our entire community is rallying behind breast cancer survivors this October,” said Dr. Klenke.

“Last year’s bra designs far surpassed anything we could have ever imagined,” said Dr.Klenke. “And this year’s entries are even more fabulous. The creativity of these students is just astounding.”

The one-of-a-kind bras will remain on display at Pinnacle’s offices, located at 7 Mallet Way in Sheridan Park, through the end of the month. While it’s free to vote, donations to DragonBoat Beaufort are encouraged. The student whose bra has received the most votes at the end of October will win a grand prize.

DragonBoat member and breast cancer survivor Kathy Haas has seen firsthand how The BRA Project is making a difference in our community.