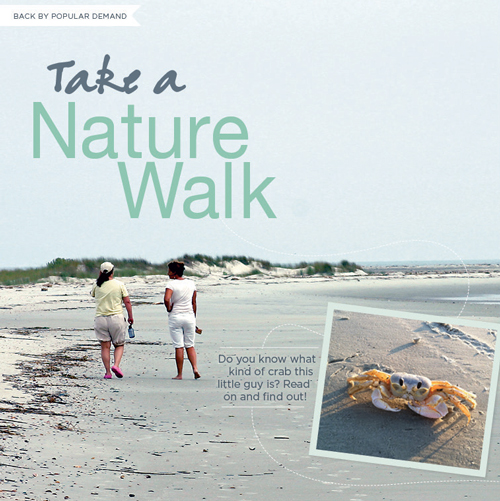 We’ve all had the experience of walking the beach, finding beautiful shells, and coming across some sort of unidentified sea creature. Sometimes, these mysterious finds can even draw a crowd. Beachcombing is a favorite pastime of many Lowcountry residents and vistors. However, strolling the beach can be way more exciting and interesting when you know what you’re looking at. Wouldn’t it be a great experience to walk into a crowd all hovering over a giant blob and begin to educate the group with your vast knowledge? We think so, and that’s why we teamed up with Carlos Chacon, the Naturalist at Coastal Discovery Museum to learn more about what’s washing up on the shores around the Lowcountry. 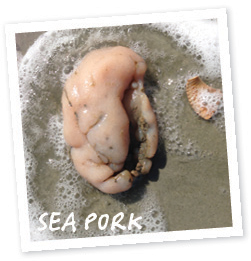 Sea Pork
The odd appearance of sea pork has many beach goers wondering. When freshly washed ashore, it is bright pink with a rubbery texture, and resembles brain matter. After a few days on shore, it turns grayish brown. Sea pork is a community of little animals called zooids, which are members of a group of organisms commonly known as tunicates that include sea pork and sea squirts. Zooids make their living by filtering water, picking plankton and nutrients out of the water. Although unappealing and blob like in appearance, sea pork is considered a member of the phylum chordate, which also includes all vertebrates. Some tunicates, including sea pork, present a notochord in their early development, although they lose it as they develop into their adult form. The notochord is the structure that develops into a backbone in vertebrates. Tunicates are considered an early evolutionary step in the development of vertebrates. 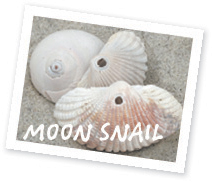 Moon Snail
The moon snail, also called shark eye, is a common shell. This remarkable snail is responsible for the small holes found in the apex of many shells on the beach. Moon snails are predatory snails; they travel the ocean floor in search of shellfish to prey on. Once they have found a potential prey, such as a clam or snail, they wrap their body around it. Then, with their mouth, (called radula and resembling a circular saw) they drill a hole through the prey’s shell, secreting an acidic substance that helps them in the drilling process. Once the hole is complete, they eat the prey out of its shell through the hole. All shells found on the beach with a little circular hole that looks as if someone used a drill to make it are the remnants of prey eaten by a moon snail. Moon snails prey on a variety of shellfish, including other moon snails. It is not uncommon to find moon snail shells predated by other moon snails. 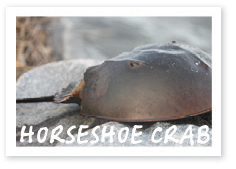 Horseshoe Crab
One of the true wonders of nature, this incredible creature is considered a living fossil. This particular designation is given to organisms that appear in the fossil records from a long time ago and are still alive today. The horseshoe crab’s oldest known fossil is dated to be 445 million-years-old and was found in Manitoba, Canada.  It is remarkable that such a creature has been alive with few changes for such a long time. Horseshoe crabs were here before dinosaurs, they were here when the dinosaurs were alive 230 million years ago, they survived whatever killed the dinosaurs 66 million years ago, and they are still here today. Who knows, they may be here after us, too.
Although called a crab, they are not closely related to crab. In fact, the four species of horseshoe crabs alive today belong to their own biological class called Merostomata. They are part of the arthropods—a group that includes crustaceans, arachnids, insects and others. Horseshoe crabs gather in large numbers in certain areas of the shore to mate and lay eggs during high tide in new and full moons in May and June. This spectacular phenomenon is something that deserves to be seen. The Coastal Discovery Museum conducts guided tours to witness the mating and egg laying process of horseshoe crabs on Hilton Head Island.

Whelk Egg Case
Most beach goers have a hard time figuring out what this odd structure can be. Many think it may be an animal skin of some kind, similar to a snake’s shed, or perhaps some kind of seedpod. However, if curious enough, one may find her curiosity rewarded by finding what the little capsules contain. This odd structure is a whelk snail egg case. The structure, produced by the female whelk, can be more than a foot long and has as many as 140 capsules on it, with more than 100 eggs in each capsule. After the egg case is produced, the whelk will bury the skinny end of the egg case in the sand to prevent the case from washing ashore.
Inevitably, some do come loose and wash ashore. Once there, the eggs (or embryos) quickly dehydrate and die. It is possible to open a capsule and find tiny baby whelks inside if found during the right level of development. The miniature whelks make for a great show.

By the way, the cute fellow on the first page is a ghost crab, named for its nocturnal behavior and pale color.

Visit Coastal Discovery Museum, located at Honey Horn on Hilton Head Island, to learn more about the beautiful natural environment that abounds in the Lowcountry…both land and sea! For more information, call the museum at 843-689-6767 or log onto www.coastaldiscovery.org for a full listing of programs and events.