Speaks Out About Important Women's Issues 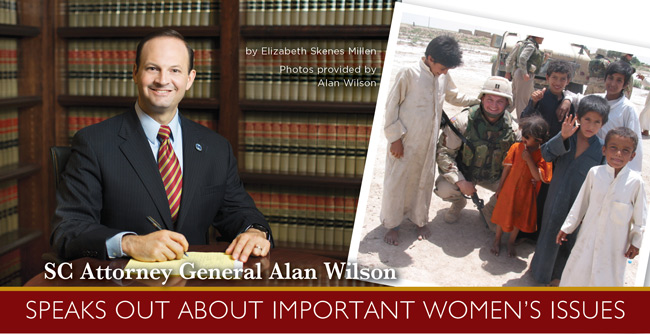 On June 12, South Carolina registered voters will vote in the SC Primary election. A high voter turnout is hopeful given the magnitude of these races for the important offices of governor, lieutenant governor, secretary of state and attorney general. A man of the people, who cares about issues important to women, South Carolina Attorney Alan Wilson made it a point to catch up with Pink Magazine.

Though talking to Alan is easy and friendly, his brilliance and passion for his job are on point. He is a man on a mission to fight Internet crimes against children, human trafficking, domestic violence, and the opioid epidemic that is impacting the citizens of our state.

If you think human trafficking doesn’t happen here, the bad news is Beaufort County is in the top five SC counties, along with Richland, Horry, Charleston and Greenville. “I thought is was something that happened in the movies, but it is a real problem. A lot of people are being trafficked by people they know,” Alan said. A task force of 12 agencies was formed and chaired by the Attorney General’s office. The task force has now grown to more than 300 agencies that fight against the cause. Wilson and his staff were also key in passing legislation to enforce and prosecute sexual predators, specifically Internet crimes against children. Since taking this on more than 600 arrests have been made.

Alan Wilson is passionate about his career and making a difference for South Carolina, but he says, “Being Attorney General is what I do; It’s not who I am. I am a husband, a father, a 22-year veteran, a Colonel in the Army National Guard. I was deployed to Iraq on combat tours in ‘04 and ‘05. I led combat and convoys throughout Iraq. I am a career prosecutor against violent crimes and child sex crimes. I’ll never forget representing a 19-year-old girl whose grandfather, also a retired law enforcement officer, sexually molested her for years. He told her no one would ever believe her if she told. He received 18 years in prison, and the girl was in tears. I walked over to her and said, ‘I thought you would be happy.’ She told me they were tears of joy, that this was the first time she wasn’t a victim, but a survivor. Through this case I got to see a real tangible benefit, and I wanted to do that for as many people as I could. Being Attorney General provides me that great honor.