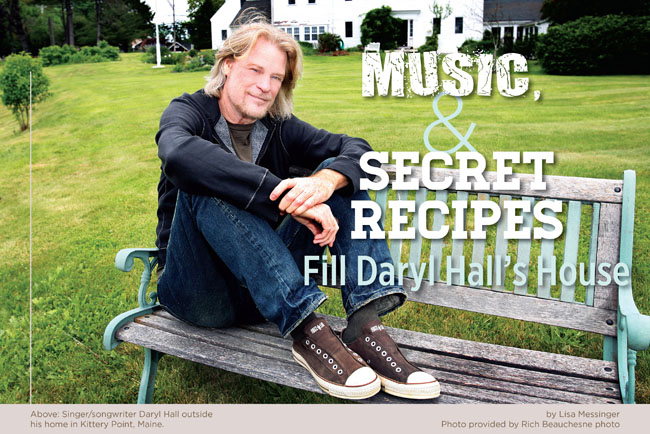 The field includes fifteen others, including Nirvana, LL Cool J and Linda Ronstadt. Half of those nominated have been nominated before. For the second year, fans also can vote at rockhall.com and the top five fan favorites will count as one vote, in addition to the votes of 600 artists, music industry professionals and historians. Inductees will be announced this month, and there will be a ceremony held in April that is scheduled to be televised in May.

Until recently, even ‘70s icon Hall’s biggest fans might not have known of his passion for things other than blue-eyed soul. The man, though, is a first-class foodie.

Therefore, as well it should, at first glance his home looks like the perfect backdrop for a cookbook, a la Martha Stewart. There’s the huge picturesque, upstate East Coast farmhouse with its hundred-year-old apple trees ripe for a secret applesauce recipe and the refurbished kitchen and dining room where loving homemade meals are prepared and shared with intimate groups of laughing friends.

The cookbook hasn’t come yet, but six No. 1 songs and five top-10 songs have, as well as versions of both the smoothest and chunkiest applesauce. All those who’ve tasted it say is the best they’ve ever had. All of it is emerging from “Live from Daryl’s House,” both the name of an award-winning, five-year-old webcast and newer syndicated television show. Created and executive produced by Hall, a successful TV season was had, and Hall has announced he’s received funding to produce more episodes, slated to air in 2014.

In a way that critics have praised him for “reinventing himself in the digital age,” singer/songwriter Hall, who started in Philadelphia in 1972 paired with childhood friend Oates, had the idea of “playing (music) with my friends and putting it up on the Internet.” Friends, who have joined him in his cozy, refurbished barn studio, have included longtime legends (Oates, as the first guest, and later Smokey Robinson and Todd Rundgren), newer hit machines (groups like Train and the Plain White T’s) and talented newcomers (Philadelphia soul singer Mutlu and Myspace pop-rock phenomenon Eric Hutchinson).

The clearly excited performers, some of whom, like Michael “Fitz” Fitzpatrick of Fitz and the Tantrums (who some critics have compared to Hall), call it, in their on-camera, off-the-cuff interviews, one of the highlights of their lives to perform with the man who inspired their own careers.

Each 30-minute episode, which appeared in about 60 TV markets nationwide, including all top-10 markets, features duos between Hall and the musical guest, including two of their songs and one of his.

That means brand-new takes on huge hits like Train’s “Hey, Soul Sister” and Hall’s “Wait for Me.” It also means dishing about lesser-known beauties, like Hall’s “Perkiomen,” which he confided to Fitz was written about the river near his childhood home that he used to cross to get to Oates’ house. There was often a sign up that read, “Perkiomen, somewhat cloudy,” which inspired those famed lyrics in his song.

Many more well-kept secrets about Hall emerge, like that he’s a gourmet, who, besides jamming with his friends, likes nothing more than a good meal, wine tasting or preparing homemade applesauce using his farmhouse’s 17th-century apple corers and presses.

In between songs, that’s just what Fitz and the Tantrums did, all while shooting the breeze with Hall. They then enjoyed the applesauce with a homemade pork meal, while dishing about the ups and downs of their careers. Train sipped the wines of the area with Hall before sitting down to a feast at his long dining room table.

Hall notes that, after all, this is “live from my house,” so it’s a no-brainer that it would include all of his passions.

That’s, too, just what guests like Fitz rave about—the rarity of the experience, “To see this kind of passion, heart and soul,” he said, “is just phenomenal.”

Many of Hall’s recipes are not written down and include just a dash of this and a sprinkle of that. Here are a few recipes inspired by his family-style meals.

Peel, core and quarter the apples. In a Dutch oven, bring apples, the 1 cup water and cinnamon to a boil. Reduce heat; cover and simmer 10 to 15 minutes, or until apples are tender. Remove from the heat. Add sugar to taste, and stir until dissolved. If you used a cinnamon stick, remove carefully with a utensil and discard. Mash apples with a potato masher until desired texture is reached. Serve warm or chilled. -www.TasteOfHome.com

Preheat the oven to 325° F. Pat the pork dry with paper towels and season with salt and pepper.

In a large Dutch oven, heat the olive oil over medium-high heat and, working in batches, brown the meat on all sides until a golden crust forms. Transfer the pork to a plate. To the pan, add the onion, celery and carrot and sweat until softened, 5 to 7 minutes. Add the garlic, and sweat another 2 minutes. Stir in the tomato paste and cook for 3 minutes to cook off the raw flavor and caramelize it. Sprinkle with the flour, and cook another 2 minutes to cook off its raw flavor. Carefully whisk in the wine and reduce it by half.

Return the pork to the Dutch oven, and then stir in the beef stock, parsley stems and bay leaves. Add up to about 1 cup of water if liquid does not come up to the top of the pork. Do not cover the pork with liquid. Cover the pan and place it in the oven to braise until the meat is fork tender, about 3 hours. Taste, and season with more salt and pepper if needed. Transfer to a serving platter and serve. -www.FoodNetwork.com

Photo provided by Rich Beauchesne photo Lisa Messinger is a first-place winner in food writing from the Association of Food Journalists and the author of seven food books, including “Mrs. Cubbison’s Best Stuffing Cookbook” and “The Sourdough Bread Bowl Cookbook.” She also writes the Creators News Service “Cooks’ Books” column. To find out more about Lisa Messinger and read features by other Creators Syndicate writers and cartoonists, visit the Creators Syndicate website at www.creators.com. Main photo provided by Rich Beauchesne photo. More of his work can be found at www.rbphoto.biz
Tweet