This Group’s Goal is No Lost Dogs 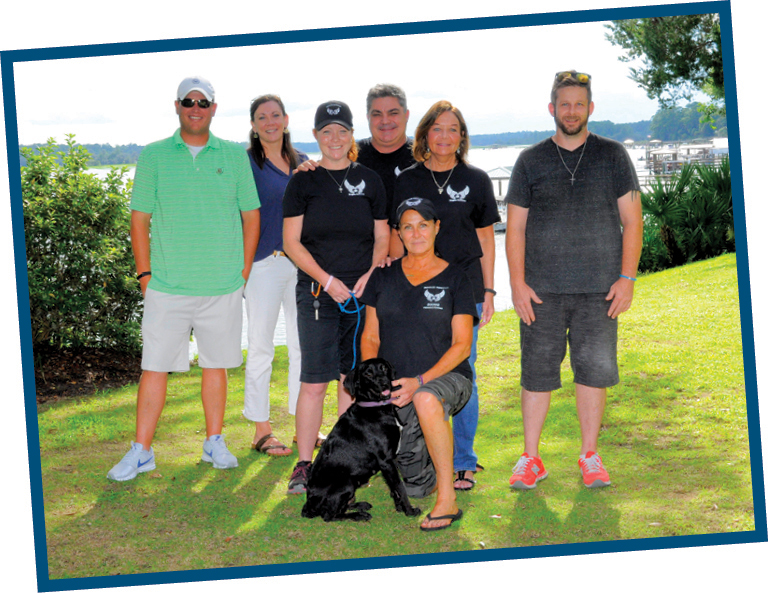 The Lost Paws of the Lowcountry has grown over the past two years to a formidable army of foot soldiers and flyer distributors. Their mission: to return lost and runaway dogs to their rightful homes. Nothing stands in their way when they’re on the hunt—they regularly climb trees, sink to their knees in mud, and forage in unfamiliar territory. And their hard work pays off; they have over a 90 percent success rate. The dedication and passion of the founding members is truly incomparable and inspiring. But their story starts simply—with one five-pound Maltipoo named Ellie.

“Something spooked her while she was on a walk and she took off,” Joanne Hammer said. “[The owner’s] daughter searched all night long. Then different individuals were going out to Palmetto Bluff whenever they had free time to search for her. We had one sighting by a construction worker, and that’s all we had to go on for two weeks. The weather was crazy and we knew Ellie must be scared. We put food and traps out. We organized a giant search party with four-hour shifts. The whole community was on the lookout.”

Eventually, two women walking along a well-trod path spotted Ellie, who was skittish and covered in dirt. She was returned to her mom on February 28,, 2015. But the volunteers, nicknamed “Ellie’s Angels,” were moved to keep searching for lost fur babies.

“We learned that it takes a village,” Joanne Hammer said. “Now, when dogs go missing, we put the word out and anyone who isn’t busy will head out to look.” She founded the Facebook group for the original search party; it has since grown to almost 800 members. Lost Paws of the Lowcountry works closely with Beaufort County Animal Shelter, Hilton Head Humane Association, and other local rescues. Dianne All, one of the founding members of Lost Paws, also runs Rogue Rescue and Sanctuary, which houses dogs and helps them find their forever homes.

“I probably spend more time working with Dianne than at my own business,” Nicole Bremer said. All three women that I interviewed seemed to overflow with their deep passion for dogs. While I spoke with them, Nicole’s husband waited outside with a black Labrador puppy, and Joanna paused our conversation to ask the barista whether the dog could come enjoy the air conditioning, or at least have a drink of water.

“It might sound crazy, but I truly believe that dogs are angels,” Dianne said. “Each dog that comes into my life teaches me a lesson. And I believe that the dogs we find, whether they’re lost or strays, are placed in front of us by God to see how we react. They’re testing us to see if we’ll say, ‘Somebody else should help this animal,’ or whether we’ll say, ‘I can be that somebody.’”

As well as organizing rescue teams, Joanne, Nicole, and Dianne want to help educate dog owners about what to do when their dog goes missing. Many pet owners are distraught and don’t think straight, which can lead to wires being crossed.

“One couple from Charlotte lost their dog over 4th of July in Bluffton, and they were devastated because they didn’t want their dog to get left behind. We searched on foot for two days before they told us they had a lake house and this dog loved the water. So really, we should have been out on boats! Luckily, the dog was found swimming and brought back home.”

If your dog has escaped and hasn’t come back, contact your county shelter right away. Put out flyers and ask the shelter to put pictures on their social media. If you have the resources, go out on foot—or contact the lovely ladies at Lost Paws.

“Keep the faith. Don’t give up after a few days,” Dianne said. “Most dogs are scared and trying to come home. When you bring a dog into your life, you’re responsible for that dog’s safety. You know the dog better than anyone, so you’re the one who knows where he’ll go and what he’ll do.”

Even more important than immediate action is preventative action. “Keep your dogs inside and safe during fireworks or thunderstorms,” Joanne said. “Check your fences. Get your dog spayed or neutered, because dogs in heat can smell mates up to five miles away—and they will get out to go find them. Keep your microchip updated if you change phone numbers or addresses. It’s all these little things that can prevent the worst from happening.”

All three women work hard for the moments when dogs and their parents reunite. “Many of the people whose pets we’ve found text us for months with pictures and updates on their dog,” Nicole said. “It’s devastating when someone loses their pet—dogs are a constant part of our lives, so when they go missing, it’s painful. And when they come back to us, it’s just pure joy.”

If you find a lost or escaped dog, either bring them to a county shelter or a veterinarian. All vets can scan for a microchip, which usually has the owner’s phone number and address.

Although the Lost Paws of the Lowcountry seems to have plenty of volunteers, Joanne said, “You can never have too many boots on the ground.” She encourages anyone who has a passion for dogs and for the Lowcountry community to join the Facebook group.

“Visibility is key,” she said. “You never know where dogs run off to. You never know who might see them. Our goal truly is to have no lost dogs. The more people who know about us, the faster we can bring dogs home.”

Lost Paws of the Lowcountry (HHI, Beaufort/Jasper Counties) can be found on Facebook.