An Anniversary Salute to the Lieutenants Gobrecht 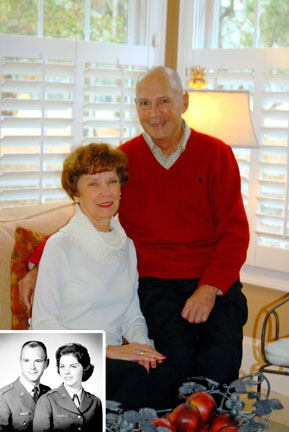 The only thing more magical than a romantic fairytale is a real life love story whose "happily ever after" has continued for nearly a half-century. Karen and Charles (Gobe) will celebrate their 48th wedding anniversary on February 16th.

This story begins in 1962. Karen graduated from Skidmore College in New York and Charles from William and Mary in Virginia. Karen returned home to Coral Gables, FL. and planned to attend law school at the University of Miami in the fall. In this pre-Women's Movement era less than four percent of students attending law school in the US were women. At the advice of a family friend, she made an even more pioneering career choice and was accepted into Officer Training School at Lackland Air Force Base in San Antonio, TX. At the time women comprised less than three percent of officers in all branches of the armed services. She was one of nine women on the base. Charles, who had been accepted into the same Officer Training School, was one of 600 men.

Karen and Charles sit next to each other on the sofa. They are both casually elegant and gracious like their home in Indigo Run. Karen, who is animated, smiles and says, "I was adventurous and ambitious and I realized that the military would offer me opportunities for travel.and service."  This understates the degree to which she was a woman way ahead of her time.

But back to the love story.  It was New Year's Eve, 1962, when Karen and Charles went out on a blind date. Cupid had to take careful aim because these were two seriously career minded people who were not looking for romance. Apparently, he hit the mark because they were married six weeks later. Whoa! How did this happen? How did you know? What did you see that made you so sure? As their story unfolds, easily moving from one to the other, there are no definitive answers. There is a definite sense of two people sharing clear values, an independent sense of themselves and a strong vision of what they wanted out of life. Karen says, "From the beginning we were best friends and soul mates." Gobe says, "I don't know the psychology of it, but we were both only children. I think we wanted a companion, someone to share our thoughts and interests"... Karen adds, "and love." An ancient sage has described true love as "a spiritual affinity, a meeting of two souls on a level that mere senses cannot divine, nor mind can explain."

Still, there were parents to convince. On February 6th 1963, Gobe's widowed father flew from Westport, CT and Karen's parents flew from Coral Gables to attend their children's graduation from Officer Training School. The couple happily announced their plans to immediately marry. Each parent voiced concerns and before flying home, obtained the couple's promise to think carefully about their decision. By all accounts, Karen is the least impulsive person imaginable, but Gobe's assignment to the Philippines would have meant a long separation. They were not willing to wait. Ten  days after graduation, three parents re-boarded planes and returned to San Antonio to attend the wedding ceremony of Karen and Charles. Their parents' trust was not misplaced.

Karen masterminded an adjustment to their career fields and duty assignments that enabled them to serve together in Okinawa for three years as "The Lieutenants Gobrecht." Karen served as the Base Transportation Officer responsible for the arrivals and departures of personnel, supplies and equipment, including aircraft. As they recall those early years, Gobe says with a twinkle, "Tell her about the phone call". One rainy evening Charles answered their home phone, "Lieutenant Gobrecht" and proceeded to be blasted by an irate officer complaining that his flight has been cancelled and there was no back up. When he demanded of Charles, "And what do you plan to do about it?" Charles calmly replied, "Hold on sir, you need to speak with my wife!"

Their marriage has been a partnership of equals.  Reflecting on what has made their marriage successful Karen says, "The first thing is trust and commitment. We are also very independent people. We never depended on each other for our happiness or success. We are soul mates, but we have lots of different interests and different friends." Their careers have required multiple international moves and long periods of separation. Gobe says, "Karen personifies everything a partner could want. She is supportive, adventurous and enthusiastic. She adapts and makes the most out of things." Karen responds, "He is the rock that holds everything together and he's the one who figures out how to make things work".  This is the mutual admiration of two people who have each led a life of high purpose.

There is a comfortable, companionable silence. Then Karen sits forward and says, "And fun!! You have to be able to have fun. We love Hilton Head. We love to dance. We're good Shag dancers." Gobe smiles.  This is a couple who love each other and love life. That's so much better than a fairytale!

Up Close:
Their distinguished careers and retirement interests require another article.

A few highlights: Both have Masters in Political Science from University of Colorado and taught college courses; Karen later pursued a career in commercial real estate; Charles became Air AttachÈ at the American Embassy in London, and Chairman of the Joint Chief of Staff's rep. to the US Arms Control delegation.
They Have Lived In: Colorado Springs, Washington, DC, Geneva, Switzerland.
Karen Has: written a genealogical account of her family's 400 year history in the US.
Charles Has: a men's only gourmet cooking club.
They Have: two children and three grandchildren.