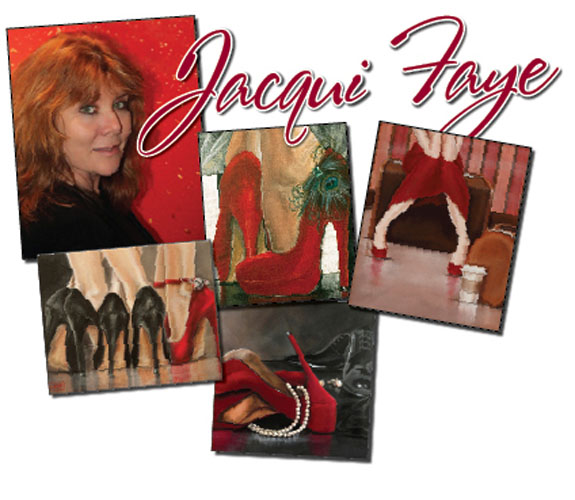 This month’s cover art is entitled “Frankly My Dear...”

Tempers, tantrums, spoils of desires...Games fought and lost in the name of fashion. But spite can drive the battle farther. To sate


Meet this month’s cover artist, Jacqui Faye. Born in San Antonio, Texas, Jacqui is a self-taught portrait artist and contemporary painter, who primarily works in acrylics on canvas or linen. As a child, Jacqui was inspired by various forms of visual art, and influenced by her mother and grandmother, both artists. After college, she spent several years in event design and marketing, which then led her to a career in graphic arts, specializing in fine art web design. Jacqui has been influenced by a wide range of both contemporary and historic artists such as Frederic Leighton, Gauguin, Modigliani, Edward Hopper and favors works by Jack Vettriano, Benini and Renzo Galardini.


“Exposed to some of the finest artists of our time, I yearned to pick up the paintbrush again. In 2007, I joined the Daily Painters’ movement, a new art phenomenon that began a few years earlier, and it was in the latter part of that same year that I painted my first Red Shoe painting.” The inspiration for The Red Shoe series came from earlier figurative paintings. Over time, it evolved into the series it is today—thought provoking expressions of intrigue, mystery and seduction. Her ever-popular shoe series receives great response due to the anonymity of the subjects, all the while conveying a sense of innocence and confidence, intertwined with hints of sensuality and slight provocativeness. Some of the Red Shoe collections features words to accompany the story and boost intrigue.


“The paintings encompass the female form in varying degrees. Playful, serious or passionate, they are faceless, allowing the viewer to identify personally with the subject. These compositions are more to me than just red shoes; each one tells a story or conveys an attitude in hopes that the viewer’s reaction will provoke them to question the meaning or reason behind the work.”


Jacqui’s painting techniques are what makes her stand out from other contemporary painters. Her use of color is accentuated by her portrayal of how light and shadows play on different surfaces and textures, inviting the viewer to get involved in the imagery. Her ability to compose the subject matter and render harmony and balance within the image, welcomes the viewer to stay a while, and take it all in.


Currently residing in San Antonio, Texas, Jacqui’s works can be found in private collections across the US, as well as England, Scotland, Wales and Canada She has had exhibits in The Benini Gallery and Sculpture Ranch, Johnson City, TX and Chabot Fine Art Gallery in Providence, RI. To view Jacqui Faye’s gallery of work, visit www.jacquifaye.com or email her at This email address is being protected from spambots. You need JavaScript enabled to view it..<;/p>