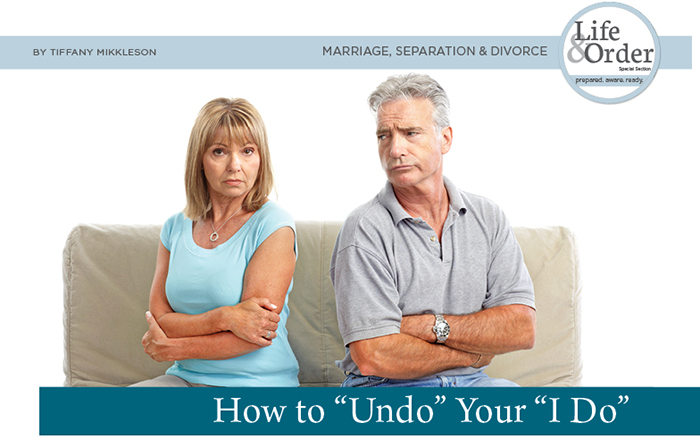 A friend recently sent me a picture of a billboard, which showed an advertisement for a divorce lawyer with a message of: “Undo… ‘I do’… Fast…Easy…Affordable.” Unfortunately, for many, it may not be as “fast,” “easy,” or “affordable” to simply “undo” one’s marriage. The process for “I do,” which includes obtaining a marriage license and holding a ceremony to sign the marriage license, is much less involved than the process to obtain a divorce from the marriage.

Each state has its own laws that govern the divorce process and procedure. In South Carolina, there are essentially five grounds to file for a divorce. Four of these grounds are considered fault-based—meaning you must prove the other party was at fault for the divorce—which include adultery, physical cruelty, desertion for one year and habitual drunkenness. The fifth and most common ground is considered a no-fault based and requires proof that the spouses have been living separate and apart for a period of one year, without cohabitation or reconciliation.

Once you decide which ground is the basis for your divorce, the next step is to complete and file all the required forms and documents with the Family Court. The county the divorce should be filed in is either the county you and your spouse last lived together as a married couple, the county your now separated spouse lives at the time of the filing, or the county you live in if your spouse now resides outside the state of South Carolina. The divorce papers, or “pleadings,” required to be filed include: A Complaint, Summons, Family Court Coversheet, Personal Financial Declaration, as well as several other documents, depending on the particular case, These papers must be served upon your spouse and proof of service must be filed with the Clerk of Court.  At this point, each divorce case will follow its own different course of litigation, depending on the specific facts and circumstances, which may include court hearings, settlement discussions, and the filing of different types of motions. If you are fighting over custody of minor children, the case will require the appointment of a Guardian ad Litem to assist the court in investigating and determining the best interest of the minor children.  Also, if the spouses are unable to reach a full agreement, court rules require the case to be submitted to mediation before a final contested trial can be scheduled.

This divorce process can take one year or more to finalize if there are contested issues arising out of the marriage. Often parties do not agree on how to divide the marital assets and marital debt, such as whether to sell the former marital home or allow one spouse to remain in the home after compensating their spouse for their marital interest in the home.  Custody and visitation issues relating to the children and amount of child support are other areas in which spouses are often unable to reach an agreement.  These are the types of situations that can force the divorce process to drag on for months… contrary to the often perceived or advertised “fast,” “easy” and “affordable” divorce case.

Eventually, the case will either be brought before a Family Court Hearing with a proposed settlement, along with the request for an award of divorce, or there will be a contested trial, sometimes lasting several days, in which the spouses and their witnesses will testify and present evidence to the issues of custody, visitation, support, division of marital property and debts. At the conclusion of the hearing to approve the agreement, or after the conclusion of the trial, if the statutory elements are met, the court will issue a Final Decree of Divorce that ends the marriage and further outlines how all the issues arising out of the marriage are to be resolved.

Ultimately, the divorce process can be a roller coaster of emotions for both spouses, which involves complex legal issues, demands significant legal resources and court fees to properly present the case to the court, all while requiring nearly a year or more to complete. It is definitely not as easy to “undo” the marriage as it was to say “I do.” People are often cautioned to not attempt to handle the process without the assistance of an experienced attorney to help navigate the legal process.