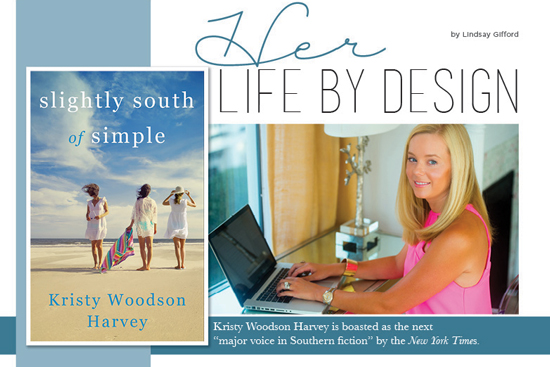 Heads up ladies, there’s a new kid on the block...
and you’re going to want to get acquainted!

Meet Kristy Woodson Harvey, blogger and author of Slightly South of Simple (on shelves this month). This young author is making a splash in the Southern fiction world. With accolades for her earlier works Dear Carolina (long-listed for the Pat Conroy Southern Book Prize, optioned for film and appeared on many “must-read” lists) and Lies and Other Acts of Love (an Okra Pick and Romantic Times top pick) Pink Magazine is excited to feature her new book and give our readers insight on Kristy.

After graduating with a degree in journalism and right before her 25th birthday, Kristy decided she wanted to write a book just for her, just to be able to say she did it. Well, she went for it, and it happened! While, she says this book wasn’t for the world to see, it made her fall in love with writing books. “I have to pinch myself all the time. I really thought it was just a dream people dream of; the statistics aren’t exactly in your favor,” Kristy said.

Kristy’s books all are set in the South. When I asked her what inspired her latest book, she said, “I love writing about family, and it is a theme that runs through all of my books. I focus on sisters in particular, as I am an only child and my mother is one of four sisters. So, I grew up watching sisters—how they relate and respond to one another and influence each other. I also enjoy writing about motherhood and life—how people respond and react when it doesn’t turn out like we thought it would.”

Along with her mother, Kristy is one of the gurus behind Design Chic blog. They blog about interior design, with some fashion thrown into the mix. It features their inspirations, home tours, things they love, favorite designers and architects. And her career doesn’t stop there: Kristy is hitting the road with a speaking/homes “Life By Design” tour. She will be hosting parties in private homes, where she will talk to attendees about how what you surround yourself with really affects and influences every part of your life. Ultimately, her goal is to inspire people to create a life they love. If you are interested in learning more about Kristy, she will be a featured author at the Charleston Author Series (see event details on left).

Kristy’s energetic personality is infectious and you can feel her passion for writing. I couldn’t put Slightly South of Simple down and read it in only a few days. And although, I chided her on the cliffhanger ending, the book is excellently written with visually descriptive and complex characters. Kristy teased I would just have to wait for the next book in the trilogy to reconcile the ending. I’ve already logged on and started following Kristy on Facebook and Instagram. In fact, she posted a picture of her four-year old son as he helped her edit her next book, which I can’t wait to read. There are definitely great things to come from Kristy! Read on to get a taste of Slightly South of Simple.

About the Book:  Caroline Murphy swore she’d never set foot back in the small southern town of Peachtree Bluff; she was a New York girl, born and bred, and the worst day of her life was when, in the wake of her father’s death, her mother, Ansley, selfishly forced her to move—during her senior year of high school, no less—back to that hick-infested rat trap where she’d spent her childhood summers. Now a mother herself with a marriage to a New York high society heir that is falling apart in a very public, very embarrassing fashion, a pregnant Caroline decides to escape the gossipmongers with her 9-year-old daughter and head home to her mother.

Ansley has always put her three daughters first, especially when she found out that her late husband, despite what he had always promised, left her with next to nothing. Now the proud owner of a charming waterfront design business,and finally standing on her own two feet, Ansley welcomes Caroline and her brood back with open arms. But when her second daughter Sloane, whose military husband is overseas, and youngest daughter and successful actress Emerson join the fray, Ansley begins to feel like the piece of herself she had finally found might be slipping from her grasp. Even more discomforting, when someone from her past reappears in her life, the secret she’s harbored from her daughters their entire lives might finally be forced into the open. Exploring the powerful bonds between sisters and mothers and daughters, this engaging novel is filled with Southern charm, emotional drama and plenty of heart.