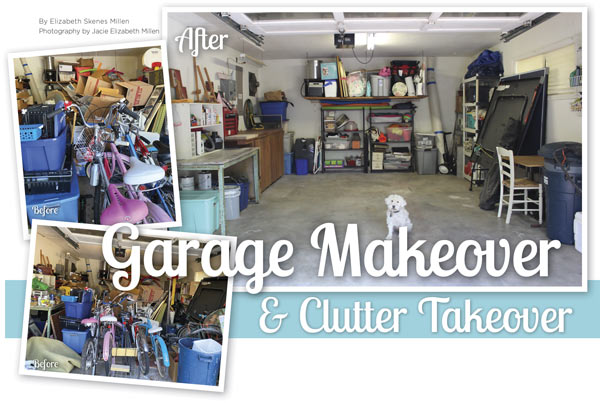 My garage was so overwhelming I began dreaming about it. In my dream I got swallowed whole by the mound of stuff piled high and bubbling over like an erupted volcano. All I wanted was to find the bicycle pump—probably to pull my bike out and escape the garage forever.
The garage has not always been a disaster. There have been times when I parked my car in there, or had a ping pong table set up when the children were still at home. But then came the perfect storm.

Remember Hurricane Matthew? Well, that’s when things got bad. When two gigantic pine trees came through the roof of the house, everything that was salvageable had to be moved out. Every. Thing. The garage was one of only two rooms undamaged. So all the stuff—14 years of family-of-four-stuff went into the garage and two Pods that sat in the driveway for the next 18 months. Those 18 months held another disaster—divorce. There’s nothing like splitting everything up when it’s all stacked up as tall as it is wide. As such, most of it got left behind for lucky me.

Finally, when it was time to move it all back in, I didn’t want most of it in the house until it was gone through and cleaned. Knowing the massive undertaking ahead of me, I completely ignored it. It seriously was too much for me to deal with given my state of mind at that given time. So, basically, the colossal clutter from the Pods joined the supersized stack of stuff in the garage, and together, I think they multiplied and prospered.

Meanwhile, I was inside on the other side of the garage entrance mentally holding it all at bay. Then came the dream, and it all crashed in on me. That cluster cluck in the garage was negatively affecting my life. I fought with it all the time. I knew things were out there, and when I needed them, I had to move it, dig through it, move it more and usually come out empty handed. I began to loathe it, as it mentally went with me everywhere I went.

The state of the garage was also costing me money. When I couldn’t find something I knew was out there, I would go buy another one. This killed me because I’m sensible about spending. It was the epitome of chaos. I had to do something, and I had to make it work for me. I needed to make the process simple and quick because when I get overwhelmed, I take naps or play Sudoku or eat. 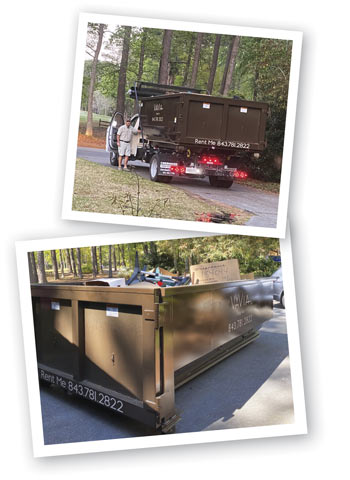 Thats when I called VaVia Lowcountry. They are a new waste management company in the Lowcountry, offering smaller dumpsters than the average, huge construction waste containers, which can crack your driveway. Vavia Lowcountry is like a boutique dumpster company because not only was the dumpster clean and nice looking, I was also able to discuss what size would work best for my project and best delivery times. On delivery day, I received a text stating they were on their way, and I could track where they were en route. What made it even better is Vavia is a locally owned company, and I dealt directly with the owners, Greg Westfall and Marco Casarin.

Getting a dumpster for a major clean out is a game changer. For me, it made this task achievable. I don’t mind getting dirty, but I didn’t want my SUV dirty, nor did I want to make a thousand trips to the dump, which isn’t possible with the new Beaufort County decal policy. Another motivator was the addition of a timeline. The dumpsters are reserved in two-week increments, which organically placed a start and finish time on my project. As you can imagine, I work well with a deadline. Knowing for sure that in two weeks life would be different kept me inspired.

When my dumpster arrived, I admit I had fear not only in making all the decisions to keep or toss, but I was afraid I wasn’t going to be able to fill it up. I was wrong. I filled it with ease, especially when I cleared stuff from the attic, too. I never knew having a very large waste container in my driveway could be so liberating!

Human behavior is funny when it comes to getting rid of stuff; it’s like a snowball effect. At first, I was pretty picky about what stayed and what went. Then, at some point, I morphed into Superwoman, and clutter was my kryptonite. A get-rid-of-it-all attitude came over me like a magic cloak, and the project leveled up as the dumpster filled up. I don’t regret one thing I tossed; I have put it out of my mind and moved on. This is the best thing I’ve done for myself in a long time. If you are in a similar situation, all I have to say is, “What are you waiting for?” Order your dumpster and conquer your clutter! You will never regret it.

VaVia Lowcountry
VaVia is Italian for “It Goes Away”
www.govavia.com; 843-781-2822
This email address is being protected from spambots. You need JavaScript enabled to view it.