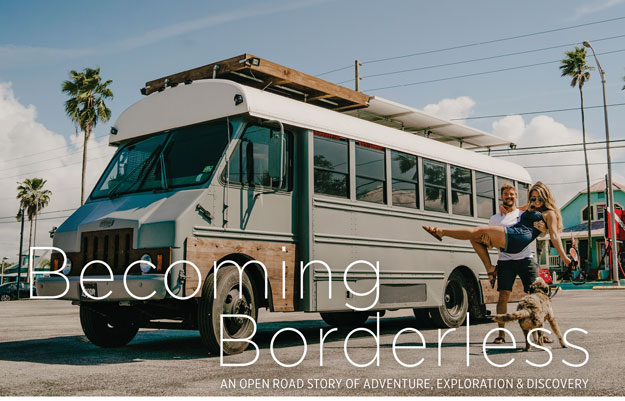 “Two years ago I found myself safely tucked into a nine-to-five, with a house and a yard as I started sharing my life with my beautiful new bride...all was not well. We settled down to accumulate more things we did not need, while promising to see the world someday—the norm in our culture. We decided to free ourselves and take life into our own hands…to become borderless.”

This is just the beginning of Adam Clayton’s story as he found his destiny (in more ways than one). Originally from Hillsborough, NC, Adam honed his skills as a photographer and videographer after attending college. Meanwhile, his wife-to-be, Destiny Bengston of Jacksonville, NC, studied environmental studies and brushed up on her business skills. Little did either know that these skills would help launch them into a brand-new adventure.

After marrying, Adam and Destiny had a trip planned to Ireland, and when their flights were canceled, they decided to put their trip funds towards the purchase that set the wheels in motion—an old Swat bus. They both invested some sweat equity and learned considerable handy-man skills as they renovated the bus into a completely livable, drivable, home on wheels. One year later, they were ready to start on one of the biggest adventures of their lives. Throw in a new Australian Shepherd puppy they named Brew, and the trio was complete.

Their new lifestyle wasn’t for the faint of heart. Their mutual love for discovery kept them going night and day for nearly two years. They made money while tag teaming on wedding photography, both nationally and internationally, and Destiny became a pro at the business side of their photography, all while mapping and planning the days ahead and their next adventure. Each day was a new challenge, as they fought weather, terrain, generators and much more. Adam says, “It’s not like coming home and being done for the day… there is always something that has to be done to be ready for nightfall.”

This all led them so much further than they could’ve imagined. Adam and Destiny documented their journey with breathtaking photography and videos of their adventures, and after meeting a few of the “right” people, their story became a television show on Design Network. And they didn’t stop there, they came across National Geographic’s Wild to Inspire Documentary contest and decided, why not? This spring they were thrilled to be named one of two finalists for the contest! The passionate, heart-warming documentary can be watched from the link at the end of this article.

What does Becoming Borderless mean to you?
(Destiny) To me this means living outside the traditional lifestyle. Instead of working a 9-to-5, I want to have more say in where I go, when I go and how long I am going for...all while making money, though, and being able to invest towards our future at the same time. I don’t want to wait until someday to start traveling or experience new places because the more you push back on “someday” the better chance that it doesn’t actually happen. Life will always get in the way, and there will never be a perfect time to do anything. You have to be comfortable with being uncomfortable to experience things in life. I grew up in a military family, always moving, so I started my travel bug early on and never really had deep roots anywhere. This is what led to me wanting to see the world on my own timing and to never stop either.

(Adam) Becoming is being in a constant state of learning and growing. Borderless is a mentality of not having limitations and pushing past your own personal borders to have a life you desire. It was one of the longest, most difficult projects we have ever done, but allowed us to have the freedom we so desperately desired. The ability to be away from the cities and the traffic. To be out in the wild, healing our souls. It’s the perspective it reveals to you, knowing how small you are and how big your problems don’t feel anymore.

Tell us about your wheels:
We started with an old Swat Bus that we stripped down to a bare metal frame and spent a year building into a fully functioning tiny home. It included a kitchen, bathroom, bedroom, closets, and a dining room/office. We had running water, and all our power needs were fueled by our solar set up. We even had central AC/heat. It took a year to build and only three months to break down, we ended up putting three new engines in it. So we sold it, bought a used RV and renovated it in under a month.
What are the major challenges you deal with daily?  Among many rewarding experiences were extremely challenging moments, as well. To save money we spent many nights in random parking lots, only to be kicked out in the middle of the night. Finding things as basic as fresh water became a major headache for us on the road.

Tell us about the most comical moment you had?
The most comical moment was when we decided to try boondocking. Destiny told me the night before not to drive down the road we camped on because she was scared of us getting stuck. We got stuck in the sand, and no one could come get us. I ended up using the moped to drive 45 min to the closest town to find shovels and we spent all day digging out the road so we could get ourselves unstuck. It wasn’t fun at the time but it’s a good story now.

Do you need to save up a lot of money to be able to live a borderless lifestyle?
No, you don’t; however, you do need to be comfortable with the uncomfortable. Many sacrifices need to be made, like the everyday luxuries of long hot showers or dishwashers.

Becoming borderless is a radical lifestyle change. What fears did you have to overcome to set out on your journey?
Minimalism and the unknown of each day. Along with that, the risk of taking our job with us, and if it fails and we don’t actually make the money, we need to stay moving forward with the lifestyle.
How do you make money while on the road?  We have a photo/video business. I want to document nature the way I see it in my head and feel it in my soul. Capturing little glimpses of magic forever lost in time. Cameras help me capture and interpret the natural order of things and share them with others.

Tell us about how your adventures have been documented and shared nationally?
Our journey started off as a YouTube channel documenting our lifestyle and adventures and it somehow turned into a television show. Having people support us and cheer us on has been fun. We get told all the time we are living the dream, and we feel lucky we have gotten the chance to live this way.  We were just two crazy kids with a dream to travel and that’s what we set out to do. What unfolded is a crazy story we will be telling when we are old and even more well traveled.

You’re one of two finalists in National Geographic’s Wild to Inspire contest, quite an accomplishment, what made you decide to enter and how does it feel to be chosen?
I have always wanted to make documentaries. I discovered the “Wild to Inspire” contest with four days left before the deadline. The deadline happened to fall on our one year anniversary, so I decided to take the best footage from the past year and tell a quick recap of our experiences and how we have grown from it all. I was absolutely blown away when I was chosen as a finalist.

Do you travel internationally as well?
Some of our favorite places we’ve traveled have been international. We have been to Ecuador, Nicaragua, Costa Rica, Mexico, Austria, Indonesia, Thailand, Iceland and Finland. The scenery, culture and experiences with new traditions and food made Thailand an all time favorite for Destiny. The landscape and potential exploring opportunities is why Iceland is my favorite place to travel to.

We never set out to build anything grand, only to live creatively, freely roam and inspire others to, likewise. I’m not sure where the road will take us next. We haven’t been everywhere, but it’s on our list.