The Quest for Knowledge 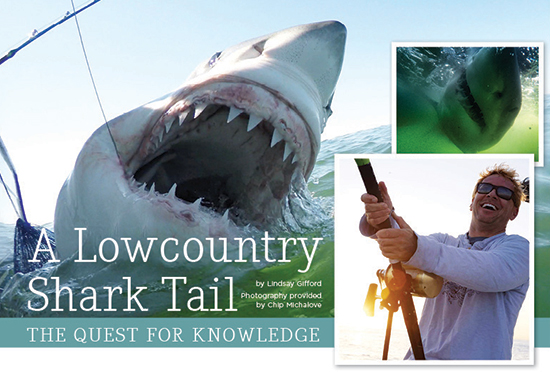 I love sharks. I find them infinitely fascinating with their migration, whimsical swim patterns and shear size. The truth is we don’t really know that much about them, but fear not, shark research has increased in recent years and the quest for knowledge among researchers and the public is steadily growing. It just so happens that one of the best Great White Shark fisherman lives right here on Hilton Head. On a beautiful overcast day in March, I headed out to the dock to interview Chip Michalove, captain and owner of Outcast Fishing Charters. We sat out on his boat, enjoyed the great weather and talked sharks.

ABOUT CHIP:
Chip has been providing locals and visitors memorable fishing experiences full-time for 18 years. Chip absolutely loves what he does and it is truly evident as he recalls “fishy” tales with a huge grin on his face. He says owning and operating a fishing charter in Hilton Head is a dream come true. Although he grew up in Louisville, Kentucky, Chip has been saltwater fishing since he was 5 years old, when he caught “fish fever” on his first charter with the legendary charter fisherman Fuzzy Davis. Chip’s passion doesn’t stop with the reel, he believes in the learning more about saltwater species and preserving them.

WHY IS TAGGING IMPORTANT:
Tagging is very important. It started over 40 years ago and the information we receive from tagging allows us to learn more about the animal. If it were to become endangered, the data helps us protect the species. And, the Port Royal Sound has more sharks than any inlet on the east coast. Chip said, “I’ve been obsessed with sharks from an early age. When I started catching a lot of tiger sharks I reached out to research crews and they sent me tags to start tagging the catches. From there I was introduced to some of the top researchers in the country like Dr. Greg Skomal. We’re dealing with an animal we know next to nothing about. I can apply my knowledge to help the fish. It’s so cool. The largest shark I’ve caught was as wide as this boat.”

IS IT SAFE TO SWIM?
Absolutely... in South Carolina that is, although Chip is catching some of these sharks as close as a quarter mile off shore. In S.C., we don’t have a shark bite problem. We have a great shark fishery but as long as you aren’t swimming behind something like a shrimp boat you should be good. Also, look for pelicans diving, it often means there is bait in the area.

WE'RE GOING TO NEED A BIGGER BOAT:
When I walked down to meet Chip, knowing his fishing track record, I expected a pretty big boat. Little did I know he is reeling in these massive sharks on a twin engine, 26-foot Glacier Bay Catamaran. It’s a smooth ride with a minimalistic design and spacious interior—the perfect boat for maneuvering around and reeling in big fish. I was even more surprised to find that there was no chair to strap into for reeling in a massive fish. Chip laughs and said, “This is the real deal. We aren’t using an electric reel or wench. It’s just you, a fighting belt and the reel.”

WOMEN AND CHARTER FISHING:
“Women are really into charter fishing now. It’s not always about fishing; there is so much to see out there like dolphins, turtles, sharks, cobia and king mackerel. It’s all about the experience, and of course, everyone is into sharks, and women are just as interested in following the sharks, especially on social media,” Chip said.

BREAKING RECORDS:
Haley Justice, a 26-year-old female angler from North Augusta, reeled in (with little help from Chip) the 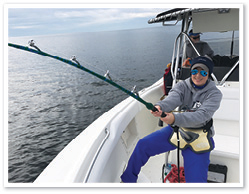 largest fish caught in S.C.—a 3,000 lb. female Great White Shark! After Chip bragged on Haley, I reached out to see just what it felt like to catch such a massive fish. “It’s hard to put it into words. The first 20 minutes we didn’t even know she was hooked. The sun was going down when we first hooked her and it was pitch black by the time we got her near the boat. We were so excited when we saw her surface behind the boat. We knew she was massive. It was an absolutely incredible experience I will never forget. I still find it hard to believe that we actually did it.” said Haley. Chip made sure to tell me that Haley did at least 70 percent of the work and he only helped a little.
Haley’s no rookie when it comes to fishing. Growing up fishing with her dad, she was hooked as a kid. She went on her first charter in Florida when she was 12 years old, where she caught king mackerel, triggerfish, red snapper, and along with the captain, they reeled an 800 lb. shark. Haley helped satellite tag the first great white shark in S.C. They christened the shark Miss Carolina and she can be tracked on the app Sharktivity.

Chip’s passion for sharks and making a difference in shark research is evident. They are putting Hilton Head on the map for fishing. Chip enjoys documenting his quests so everyone can follow along via social media with photos and video. “It’s a dream come true.”

GOING VIRAL:
Chip has amassed a lot of followers, and one shot in particular went viral on social media. He said he was getting calls from the major television stations like CNN, asking for permission to share the photo. It’s no wonder, look at this behemoth!

FOLLOW ALONG: Captain Chip and crew have great video footage of their catches. Logon to check them out: www.outcastfishing.com. Also, follow along on Facebook (Outcast Sport Fishing) and Instagram (outcast_sport_fishing) for up to date action! To track local sharks, download the Sharktivity app or Osearch Shark tracker.