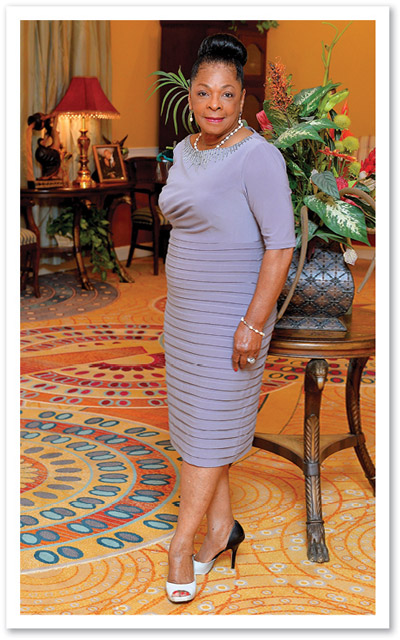 Vivian Galloway grew up in poverty in rural Rowland, NC. Her parents were farmers; she, the fourth of ten head of children. As bleak as her childhood was, it is the very foundation that sprouted her strong spirit. “I was determined farm life was not for me,” she said.

After graduating high school, Vivian moved to New York City seeking opportunity for a better career and life. One of the lessons engraved from impoverishment: Strive to be self-sufficient. Taking a job as a receptionist, she attended college classes at night. She also met William Allen Galloway from St. Helena, SC. They married and began a life together that would prove to be fruitful. And yes, self-sufficient.

In a time when women, let alone African-American women, didn’t have much of a voice, Vivian didn’t get the memo. She was marching to the beat of her passion and grooving on every opportunity that came her way. She and Allen were savvy in business, in their relationship and in relying on each other as trusted partners.

By the late ‘70s, the couple moved to Charlotte, NC for a job opportunity for Allen. It fell through, but they weathered the storm together. Vivian decided to run for Sheriff of Charlotte, an elected, public position traditionally held by men. Her platform was to reduce the recidivism rate. She lost, but she came in third out of seven—all men— and forced a run-off. Vivian is a small woman. Elegant, too. Kind. And, mighty.

She started a construction business out of necessity while in Charlotte—Viv’s Remodeling Company. She would bid on distressed housing properties, rehabilitate the homes for the city, which would then be used to house indigents. This was the perfect job for her because it paralleled with her passion to help people. “I enjoy working with people. I tend to gravitate to the needs of people, always trying to help solve problems,” Vivian said softly.

Vivian and Allen found their way back to the Lowcountry, where they bought a radio station, started a funeral home, and became licensed bail bondsmen. Allen is a third generation mortician and funeral director. Vivian is also a licensed funeral director. They own Allen Funeral Home, with locations in Coosawhatchie, Beaufort and Lobeco, SC.  Basically, anything Allen does, Vivian does it, too. When asked who her biggest inspiration in life is, she responds with hesitation: “My husband. He feels there’s nothing I can’t do. All of my efforts are pushed by him. We have mutual respect for each other. We spend a lot of time together, respect each other’s territory and discuss things before we move forward. He is the business mind. He’s way before his time.” Vivian and Allen have been married 50 years.

Something else Vivian and Allen do together is quite out of the ordinary. They raise and trains doves. They built a coup, bought six baby doves from Charleston 10 years ago and started training them. They now have more than 75 doves; one of the original six is still living. They use the doves at the end of funeral services to symbolize the deceased being released to the heavens. “Some of the doves do such a beautiful job,” Vivian said. “They will beat us home most of the time and be standing on the landing waiting to get into their coup.”

Vivian and Allen are wonderful community stewards. Being in the funeral business, they have comforted and helped many families through the worse times of their lives. Vivian says she is a behind-the-scenes person. However, her compassion and concern for others make a difference every day. Not only does she help those dealing with loss, she also enjoys being a part of her church and encouraging the youth who cross her path. “God has given me the insight to encourage young people. No matter how difficult things are, keep going,” she said. With what she has seen, children should listen.

Vivian Galloway is truly an original. It comes naturally to her, although she’s never thought of herself that way. Her catalyst is still that instinct to get away from Rowland and not be a farmer. One would think humble beginnings would make someone stingy for fear of lack, but not Vivian. “Giving is a great part of my life. I know where I came from, where I could only look through the window and see kids eating ice cream. If I can help others, I’m happy to. I love giving! I think of others all the time.”
That, dearly beloved, is a legacy and Vivian Galloway is a living example.

Words to Live By: The Golden Rule—Do unto others as you would have them do unto you.
Inside the funeral biz: “We have 25-30 urns of cremated deceased whose families never returned to get them.”

Advice for families going through loss: Spend time with friends and family. Try not to be alone; it only makes you think about it more. Keep active. It’s fine to visit the gravesite.

Kindest thing someone’s ever done for you: I was in a car accident. My sister, who lived in NY, had only been retired for two days. She came down and lived with me for three months to provide care.

For fun: Allen and I just went on our 20th cruise! I also enjoy exercising, reading, gardening and spending time with my husband. We used to love to dance!