A View to a Thrill 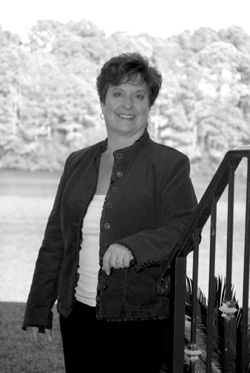 There were only two major vacations during Toni Glick's childhood, one to Europe to explore her grandparents' Italian heritage, and another through the American West. But these two trips were enough to infect her with the travel bug for life.
When she thinks about those excursions now, Toni marvels at how her father planned them start to finish without ever being able to use the Internet or consult a travel agent. She credits those early experiences with helping her to form the travel philosophy she has now.

"I think those trips taught me how to go with the flow of traveling," said Toni, who now takes her own family on most of her vacations. "You have to be pliable when you travel, accept things that might go wrong and just go with it."

Having said that, Toni must have her father's same knack for planning, because it seems like things hardly ever go wrong. She took her first cruise to the Bahamas in May of 1978, but it was a transatlantic voyage to London and Paris in June of 2000 that Toni says was the first real, extended journey she went on as an adult. Now she has been on a total of 17 different cruises, to destinations as diverse as the Caribbean, the Baltic, Alaska, the Mediterranean, and Hawaii, plus a fair amount of overland travel around Asia. Still there's never been a serious hitch in her plans.

"I don't really have stories because our trips are usually non-eventful as far as bad things, knock on wood," said Toni. "When I think about different places, it's more like views than stories."

Toni could talk for a long time about the views she has seen: Hong Kong Harbor as pictured from atop Victoria Peak, where she spent her birthday marveling at the beauty of the Hong Kong skyline all lit up at night. The bluest of tropical blues in the water off Tahiti. The grandeur and stained glass of the cathedral at Notre Dame. The dining table at Catherine's Palace in St. Petersburg, where she celebrated another birthday with a grand meal and the purest of Russian vodkas. A view looking out across a field of glaciers in Alaska and hearing their thunderous cracks as chunks of ice broke off and plunged into the frigid sea. Buddhist temples full of untold quantities of gold, and steeped in the prayers of people who Toni says are the most devout believers in their faith that she has ever encountered. The Russian subway, which was the cleanest and most beautiful public transportation system she had ever seen, with crystal chandeliers in the underground stations. Castles in Copenhagen, the Seoul Tower in Korea, floating markets in Bangkok, and the queen at Buckingham Palace (yes, she really saw the queen!), plus a thousand more views that have expanded her horizons in a continuous curve around the globe.

"It's nice to travel and see how other people live because it gives you a real appreciation for the United States," she said. "There is a lot of beauty in the world, not only in the places and sights, but the people as well. But when I come home, I'm always happy and proud to live here."

Up Close
Hometown: Highlands, NY Family: husband, Paul and daughters Stephanie, 27 and Erika, 22 Profession: last October she became a licensed travel agent and associate of Valerie Wilson Travel, Inc. Member of: Palmetto Kiwanis Favorite haunts: cathedrals; "I read somewhere that there are like 170 cathedrals in Rome, and my kids accuse me of having gone into 160 of them." Asian travel tip: Just dig in and eat the food; don't ask what it is because you might not want to try it. Next trip: Australia and New Zealand When she's 86: hopes to be revisiting her favorite places