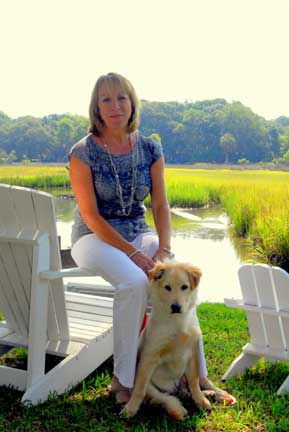 Hilton Head Island is known nationwide as being a beautiful vacation destination with a resort-like atmosphere and plenty of activities to do, but it hasn't always been this way. 35 years ago Hilton Head was hardly more than a one-stoplight town with a Hardees and a two-lane road. Few people have been around long enough to see the town change over time, and one of these unique individuals is Terry Notartomaso.

Terry and her family moved to the Island in 1976 and purchased the Adventure Inn on South Forest Beach. The Adventure Inn was built in 1962 and, despite its oceanfront appeal, had been used primarily as a hunting lodge. Due to financial difficulties, the lodge was forced to close in 1976. Terry's parents, Dennis and Jean Lowes, had been looking for a place to develop and were basically set on a place in Florida when they came to Hilton Head on a golf trip and fell in love with the area. They cancelled their plans for Florida and uprooted their home in Detroit, Michigan to start a new "adventure" of their own.

Terry followed soon after, and slowly the rest of her family found their way down South too. "My parents urged me to move so I could help with their new business, but I was set on not coming. I had a good job in Detroit, a cute sports car and good friends. My job gave me a 30-day leave so I could come check it out. Thirty days later I went back and quit my job, sold the sports car, packed my stuff, said goodbye to my friends and I haven't looked back since."

Terry and her family converted the rooms into efficiency rooms and began a timeshare business where they started selling 25-year memberships. They also were the seventh resort, and the first on Hilton Head, to join Resort Condominiums International (RCI) which now boasts more than 5,000 resorts worldwide. "The Adventure Inn has helped allow people who otherwise couldn't afford to vacation here to be able to afford it. I've watched people bring their kids, and then their kids brought their kids," Terry said. "The town used to be a ghost town after Labor Day. There were less than 5,000 people who lived here year-round and half of the restaurants on the island would close down after summer. The timeshare business has helped expand the season to make Hilton Head a year-round resort destination."

Soon after purchasing the Adventure Inn, the Lowes family opened a fine dining restaurant called Fitzgerald's Restaurant. Since then their company has changed its name to Vacation Times of Hilton Head, and has expanded to include villa rentals, regime management, timeshare and general real estate. Terry began working as a bartender at Fitzgerald's, sold timeshares, became rental manager and now sells real estate.

One thing that makes their organization unique is how it has basically stayed a family business for the last 34 years. Terry currently works with her two sisters, her brother, brother-in-law, sister-in-law, nephew, and has worked with several of the other family members in the past. "I know it could have gone either way, but so far working with my family has been a positive experience. We all have our separate duties and we respect each other's abilities and niche in the business," Terry said. "Working together hasn't caused any rifts- we still socialize outside of work and act like a regular family. I can't think of anywhere I'd rather be or people I'd rather work with. I've been very blessed."

The Adventure Inn closed down three years ago, but Hilton Head hasn't seen the end of it yet. The family is working to redevelop the property in the future. Although things have changed on the Island since the 70's, Terry admits it is still the only place she wants to be. "Most of the changes that have been made to the island throughout the years have been positive. There is nowhere else like Hilton Head- the history, the amenities, the beauty. It is truly a wonderful place."

Direct Family: Husband: Michael (who she met the first night she arrived in Hilton Head!), Daughter: Amanda (28), Son-in-law: Mike (30),  Son: Mike (24), 2 Grandchildren (4 & 2)
Hobbies: Golf, playing games, playing with her grandchildren
Future Goals: "When we're retired, my husband and I always talk about buying a sports car big enough to hold two golf bags and two hanging bags and driving across the U.S. to play as many golf courses as possible!"
Words of Wisdom: "Love the Lord your God with all your heart and with all your soul and with all your mind and love your neighbor as yourself" Matthew 22:37-39