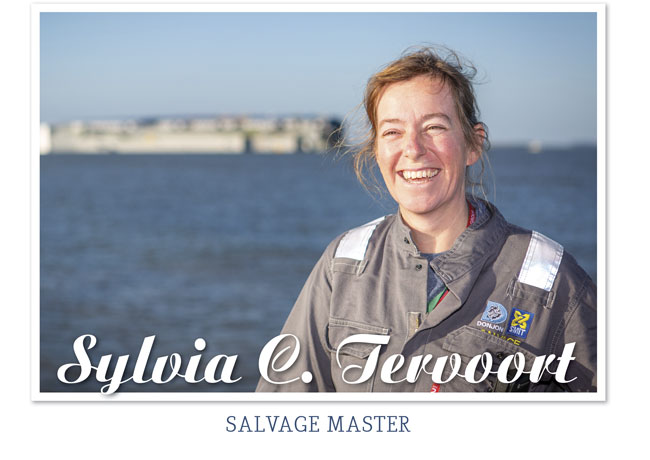 Sylvia Tervoort, who hails from the Netherlands, speaks with a wide smile, shakes hands with the grip of a titan and is an excellent ambassador for the world’s seafaring industry. Since 2008 Sylvia has been a Salvage Master with SMIT, one of the largest maritime salvage and towage organizations in the world. This job title, usually held by men, is held by only one woman in the world and it is Sylvia.

Since early September, Sylvia, along with approximately 50 SMIT salvage crew members and other first responders, including the US Coast Guard and State of Georgia professionals, have been in the Golden Isles handling the salvage operation of the capsized Golden Ray cargo ship, which is lying on its side in the St. Simons Sound. The almost new two-year-old massive ship is more than two football fields long and has capacity to carry up to 6,933 cars.

Setting Sail
During Sylvia’s school years she thought she might be a nurse. “I wanted to do good for others because I like challenges in life. I also like technical things. I was shy but wanted to do 100 things at a time.” After middle and high school, she got a proposal to go to nautical college, which included a one-year apprenticeship at sea. “At age 17 and 18 this was all very exciting. I started nautical college in Amsterdam in commercial shipping and trading. In other countries, you could graduate as a mate, or an engineer, but in the Netherlands at that time, is was a combined education. I was most interested in the technical side. No one in my family had ever sailed; none of us had a connection to the sea. I was the first.”

“My dad made it clear he would help pay for my college only once, so I knew this was it. They had no clue what I was going to study at nautical college but now they have seen me on television and are very proud of what I am doing.

“When I did my apprenticeship, the technical part was the most interesting. Cargo handling is also very interesting, and I did that on chemical tankers. It was great being at sea and still is! I did get seasick very easily, but tanker trade is the most stable due to vessel weight and cargo. After my apprenticeship, I got my license and continued as a maritime officer and later became an engineer on a vessel.

In 2006 she went to work for SMIT. “I used to sail three months away, three months at home, and somehow it got to be 12 months in an office, and I cannot do that work—it’s too static.” She needed to find something different within the organization.

Because of Sylvia’s work opportunities in working on a couple of operational projects in the salvage department, she tells of a life changing moment: “One of the guys, Jules Martina, (this was 11 or 12 years ago) said to me, ‘Maybe you can become a salvage master.’ I didn’t know anything about salvage. I was only age 28. ‘You can do this.’ And, here I am.” Sylvia considers Jules and colleague Chris Bos as her mentors.

Excellent Teamwork
“Our crews generally want to be of help so we work together quite well. I love logistics and planning; it is a great satisfaction of my life. Our groups work in excellent teamwork for months,” she shared proudly. “We sometimes miss weddings, marriages and funerals because we can’t go home, so we bind our lives out at sea. We also work together with those we have never seen or met before. We make things happen and are proud of one another. It’s a joint effort, and we have a big responsibility others don’t recognize.”

Sylvia thrives at being a salvage master. “Being the salvage master is to ensure the work is getting done and all of us are happy about it. I can tell you it is a heck of a job to be sure it is done properly. A wreck removal can get up to 70 people or more,” Sylvia said. “We work world-wide, and I have been to many places. Ship salvage is done in many different locations and cultures. The really nice thing is you don’t see a country as a tourist; you are there working with local people and in local circumstances.”

“Here the US Coast Guard and the State of Georgia are a big support. They report each day, as we do, as part of the OPA 90 (oil pollution act) regulations. They provide safety, media and public health to work with us, too. Each day I get to support people and make sure the job continues. If everybody is genuinely satisfied doing their job, then everything falls into place. In the end, to achieve the main goal each day, it is another great thing.

“The Golden Ray salvage is a big job and considered to be environmental, rescue, cargo and the ship,” she said. “Normally, in 99 percent of cases, the salvage company is never engaged in rescue. In this case, we were. I got to help coordinate in the South Korean sailors’ rescue. Everybody had to make sure we were all on the same page at the same moment. I worked logistics and communications.

Pollutant recovery is a big part of our job, too, because of the environment. It is seven days a week here and the job continues—the Golden Ray is not waiting for us.” 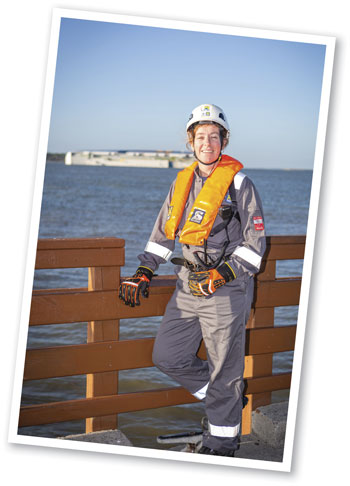 Sylvia is proactive with deadlines, as they are forte. “Why wait for a deadline? Let’s do it sooner! If you leave stuff on your table for tomorrow, tomorrow you will get a new file to add on to the pile, so I say do it today! Especially in salvage.”

“I have been accused of being energetic”—a title she owns with a big smile. “To unwind, I like to watch 30 minutes of TV just before bedtime to slow my mind down. I like Dutch interviews and most any show, as long as there are no commercials.” Another good thing is when Sylvia gets time to text her husband, Jan (pronounced Yahn), who also has a maritime career. She has had very few days off since her arrival. “But when the opportunity comes, I like running, hiking and cycling.”

Giving Back
Sylvia is supportive of sea education, especially studies in sea engineering and handling cargo. “Mathematics, physics and sometimes chemistry is a big part of it all. Star navigation is also where mathematics and physics tie in. If you have your basics, it will get you to so many other things you can do.”

For Sylvia, nautical college is where it all began to make sense. “Math, physics and chemistry makes sense in navigation, including longitude and latitude so you can know where you are in this world. Star fixes and how it all works is very interesting. How do you place cargo on a vessel, especially for stability and safety on a ship? They have a whole sequence for that. And with tankers and chemical trades, even loading cargo onto airplanes each day at airports, is all logistics. There are all kinds of models to work with, and mathematics always tie in.

“I want younger girls to know if they have a sense for something, to go for it. You know; people in the world will try to convince you otherwise. That is what they do with commercials. If you have something in your mind and want to do it, just follow your instinct; it is the best thing. When other people say to do it like this, I say, don’t let them distract you. Deep inside you know what you can and cannot do. I believe every first step is the hardest, but once you do that step, it is the one that puts things in motion. So, believe in yourself, don’t be attracted by other’s opinions. You will fall, and the more you fall, the more you will learn. So, don’t be distracted by making mistakes. You’ll get there.”

Sylvia never seems to slow down and is eager to give back. Some of her free time is spent serving as a “Sea Legs” ambassador. “In Dutch, if you have sea legs you don’t get seasick! We have a lack of seafarers in our country, so I advertise as a seafarer ambassador. We go to primary schools where kids are 10 to 12 years old, and we explain what you can do at sea, what you can become. Most kids have no clue. I never knew it existed. During my high school someone came up to me with a brochure and I got interested. It’s people like us who talk about it, bring it to life and inspire others.”

Family: Sylvia and Jan live in Castricum, near Amsterdam. “My parents live close by, both are retired. My wonderful younger sister, Pauline, has three great kids.”

Play-doh Demo: “I don’t need a 3-D printer when I can explain it all with Play-doh. You can shape it into a tanker, set it on its side, make little dents, and then we all talk about it. I like to keep it simple.”

Languages: “I speak two to three languages, my German is not that good, but English and Dutch, of course. English is the maritime language so all of us at sea can understand each other.”
Gawkers: “Many locals want to come out to our salvage sites the closer we are to shore. The Costa Concordia project (that she worked on) was on a small island, so the island people were helpful. The closer the sites get to land, though, everyone is attracted to it as something to see. Then safety is an issue and we have to manage that part by itself.”

Dining Treats: Sylvia has eaten our local blue crab, which she found a bit of work, but delicious. Breakfast is always her yogurt and fruits. Dining out and dining at home in the Netherlands is an event, “We cook together and sit at the table to enjoy.”

She can pack a ship but packing her suitcase can be challenging… as it all mostly lives in the back of her car. “When salvage happens, I must get to an airport quickly and packing can be a nightmare. I keep a coat and other warm/cold weather clothes ready.

On the web: SMIT Salvage, B.V. the Netherlands, www.smit.co