A Standout in South America 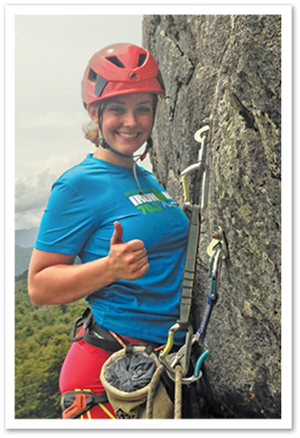 Beaufort girl Samantha Pettigrew, “Sammy” to her friends, is living the dream down in beautiful Santiago, Chile.  She is only 24, but has recently accepted a job with Stanford University as the Student and Academic Services Coordinator for the study abroad students living in Chile.  Her job will include providing guidance and planning activities for 15-20 undergraduates each quarter who will be living with local families and studying with local professors.  She will be the university liaison to introduce them to the local foods, activities and plan field trips for the weekends.  What a fantastic job, right?

How did this wonderful opportunity come about?  Well, it started back in Mr. Ron Walker’s Spanish class at Beaufort High School.  Hundreds of students pass through classes each year in high school, but this teacher made a tremendous difference in so many students’ lives.  He made learning Spanish fun for Sammy, and she continued it at Clemson University, obtaining a degree in Language and International Trade.  She was a study abroad student herself in Spain, and her love of languages and travel started her moving in this direction.

Sammy graduated from Clemson University in 2014, and planned to teach English in Thailand along with a friend.  That plan didn’t work out, but Sammy didn’t give up.  She moved instead to Santiago, Chile, not knowing anyone, but with a fluency in Spanish and a desire to teach English to adults.  She created her own business, “Sammy’s English,” where there is a great demand, especially for professionals, to be fluent in English.  She immersed herself in the Chilean culture, making new friends, trying new activities and enjoying all the beautiful country has to offer.

Chile is a very long skinny country over 2,000 miles long, but only around 100 miles wide, on the west coast of South America.  It extends from Peru in the north to Antarctica in the south.  The deserts in northern Chile are the driest on earth, and the southern region has active volcanoes.  Throughout the country are mountainous regions with beautiful ski resorts.  From where Sammy lives, it’s about an hour-and-a-half drive to the ocean, and one hour to the mountains.  The beaches and mountains are unspoiled and the Chileans are eager for tourists to come visit.

She saw the study abroad coordinator job a year ago and thought about it, but didn’t apply.  The posting re-appeared not long ago, and Sammy went for it.  She applied online, as required, but she went a step further, finding the actual field office for Stanford University in Santiago, and knocked on the door with her resume in hand.  Take note, job seekers!  If you want to stand out from the crowd, take a lesson from Sammy.

She found the best way to meet local young people her age is through sports.  Her roommate invited her to join a group of friends participating in a triathlon:  swimming, biking and running. Sammy, a competitive gymnast since age 3, had run in college, so she easily added the other two sports to her workouts.

Sammy likes a line from the country group Sugarland’s song “Something More” that says: “Some believe in destiny and some believe in fate; but I believe that happiness is something we create.” It pretty much sums up Sammy’s philosophy, way down in the southern hemisphere; she’s having fun by creating happiness for herself.

Favorite activity:  Bicycling around Santiago, the capital city of Chile (Pronounce it “Chee-lay” if you want to sound like a native)

Favorite food:  Tacu-Tacu—a Peruvian side dish, a sort of browned patty of rice and beans, along with a steak.

Hardest adjustment:  Arriving in January, which is summer in this part of the world. The apartment she was staying in did not have air conditioning! Santiago is surrounded by mountains. It is very cold in the winter and hot in the summer.

Accomplishment her first two years down there:  Completing a master’s level course in Spanish at the Catholic University in Santiago