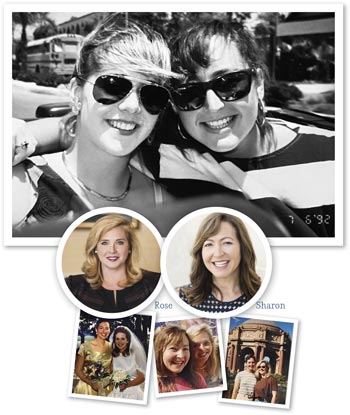 In the summer of 1990 two young college coeds headed to Capitol Hill as student interns.

These US Senators were polar opposites in their political views and ideologies, and quite frankly, so were these two young women. Fate brought them together as roommates that summer, and against all odds, they built a friendship that has lasted three decades and counting.

Rose said, “Everything about us was totally different. Our friendship blossomed over that summer and we somehow created a unique bond that has transcended the years. I had never been exposed to anyone like her. She opened my eyes to a whole different universe. Growing up in a small, rural town, I had never met anyone with strong, liberal views, or anyone from the West Coast.”

Sharon added, “We’re both grateful for our deep, long-term friendship. To this day, I maintain that whoever was in charge of placing interns used our student bios to place us together. I imagine them saying, ‘I have the greatest idea! Let’s put this Southern belle working for Thurmond with this liberal Jewish intern working for Boxer. It will be the biggest social experiment!’ This was in the days before reality TV, and our summer was a reality TV show without the cameras.”

These women found common ground that bridged the political divide, and both are still active in their respective parties. They even have a pre-election phone call the night before every presidential election. Although they may nudge each other a bit toward one side or the other, both women have learned the lessons of respect, open dialogue, the art of listening, empathy and understanding another’s perspective…and the importance of laughter! In a polarized environment they have found a way to use humor to make their points. They laugh, they tease and ultimately they respect each other. “There’s never been a time that our differences made us angry; they are opportunities to open our minds to different ways of looking at issues. Conversations humanize stereotypes and give us insight and compassion and teach us to think deeper,” Sharon said.

Both Rose and Sharon discovered common bonds: The importance of family and their respective faiths; the shared values of loyalty and love; the importance of education. They both worked for their fathers in family businesses and saw them as superheroes. Plus, both are the first-born children of their families, and they both are driven to succeed.

“When we first met all we saw were our differences, but we learned so much about our commonality. Our friendship is very uncommon, and our bond is a treasure,” Rose said. “Sharon is brilliant, ferocious and tenacious. Nothing can get in her way. She can accomplish anything with her work ethic.”
Sharon described Rose as a “firecracker.” “She is warm, caring, smart and compassionate. She has enormous energy and is a leader.”

Sharon said that summer wasn’t just about politics. They also experienced different social norms. She remembers how Rose and other interns from the South taught her how to use makeup, which she never wore, and “put on her face” before going out of the house.

One weekend Sharon and Rose took a road trip to New York City. Rose hadn’t traveled much and had never been to the City. “I had been there,” Sharon said, “so I could guide her about pickpockets, using the subway and navigating the streets and crowds. Rose was covered in bows, Laura Ashley style. Here we were, standing in a filthy subway station, and she was the Southern belle charming two NYC police officers. She looked like she stepped out of a magazine. They wanted to take her home to meet their mothers! I think that trip started Rose’s love of travel.”

Over the last 30 years, these two remarkable women have traveled the world together. They were in each other’s weddings, they have visited each other’s homes, shared milestone events, and now, their teenage children are the next generation of friends.

Life lessons learned from this unlikely duo are to surround yourself with smart, authentic, open-minded people with different views…and to laugh a lot, according to Sharon.  Rose said, “There is no need to fear the unknown. Seeing the world through different lenses has made me a better person.”

Up Close:
Rose is the wife of Weston Newton, State Representative of the South Carolina Legislature for District 120 (Beaufort and Jasper Counties).

Sharon attended the University of California at Santa Cruz and is an attorney. After Sharon passed the bar exam, Rose and Sharon cruised the Greek Isles together, an example of Rose’s spontaneity.

Rose attended Converse College in Spartanburg, earned an MBA from the University of South Carolina Moore School of Business. She is the Chairman and Marketing Officer of The Bank of Clarendon.

Sharon's two sons were born with lethal allergies to all nuts. She was terrified they might die even by handling a library book after a child who had just eaten a peanut butter and jelly sandwich. Rose said her actions were an example of her dogged determination. She researched clinical trials, got both boys into a study at Stanford, and for two years went through a grueling process of administering minute amounts of different nut proteins to them. Her sons appeared on the cover of the New York Times Magazine as the first people in the world to become nut-allergy free.