Twin Teachers Who Can Really Lift! 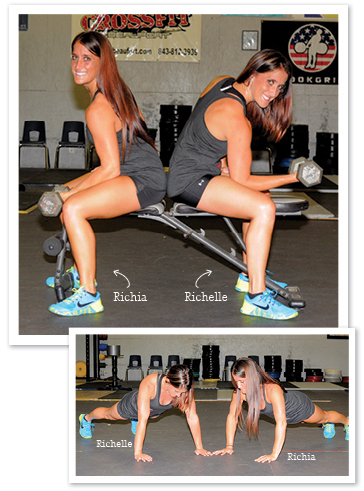 Twin sisters Richia Wedzik Jeter and Richelle Wedzik Youmans look so much alike, but they are fraternal twins, not identical, they informed me. Both young women came dressed to meet me at the Waterfront Park Coffee House in snazzy workout outfits; showcasing toned, muscular, yet still curvy physiques, with their long brown hair pulled up top of their heads in neat topknots.

They are 30 years old, both have masters degrees in education. Both have been married about two years, and teach third grade, but not at the same school. Richia is at Shanklin Elementary in Northern Beaufort County, and Richelle at Okatie Elementary. What they both like to do after school, five times a week for about an hour, is CrossFit. And it shows.

According to CrossFit’s official website, www.CrossFit.com, the workout is made up of “constantly varied functional movements performed at high intensity.” Crossfit is also data-driven. There are whiteboards and timers, weights and online leaderboards galore. Each person is working to achieve his/her personal best, but it’s a lot more fun to have games and contests, with various team configurations and regional meets. Members can easily compete online in identical events with participants all over the world, even China, Russia and many in Mexico. The success rate of exercising with competition and camaraderie can’t be underestimated.

The competitions are where the sisters differ. Richia has gotten involved in regional competitions, while Richelle hasn’t yet. Both are excellent golfers, having grown up on Hilton Head Island, and then graduating from Bluffton High. They were on the USC Upstate golf team, and both still enjoy golfing now with their husbands, Steven Jeter, a Trane technician, and Hardy Youmans, a Lieutenant with the Hardeeville Fire Department.

Richia and Steven were married first, and had a private, romantic wedding in July of 2015 in Las Vegas. The chapel streamed the ceremony live for friends and family to watch, and they had a ball. Richia highly recommends it, and says she and Steven would do it all again. Richelle and Hardy married four months later at the Mighty Eighth Air Museum in Pooler, Georgia. They had a traditional ceremony with friends and family, cutting the cake, first dance and so on, but Richelle says she wouldn’t do that again. “Too much hassle and planning to do!”

Both young couples spend Sunday evenings preparing meals for the coming week. They prep their lunches and dinners in advance, and have five days of healthy meals almost completed before the busy schedule of teaching school on Monday morning commences. They agree on their favorite lunch, grilled chicken salad, and dinner, steak. They also agree that school lunches are getting healthier, and try to help their third graders make choices of salad and fresh fruit as much as possible.

When asked for some tips to keep an exercise program going, they both advised that pre-planning, just like meals, is the key. “Pack your stuff (clothes, shoes, etc.) the night before and have it in the car.” They both stated that making their workout regime a regular event right after school is the only way to keep it successful. Richia works out at the CrossFit Beaufort facility on Hamar Street, and Richelle goes to the CrossFit May River gym. They both spend about an hour each weekday, and love it. They attribute their dedication to staying fit to their mom, Mary Jo Wedzik, who “has always been a good role model.”

When asked about hopes and dreams for the future, both young women plan to keep teaching, but add Early Childhood endorsement to their credentials, possibly teaching younger grades. However, they both enjoy teaching third grade because of the curriculum and students’ developmental ability. Even so, they are counting the days until summer break. 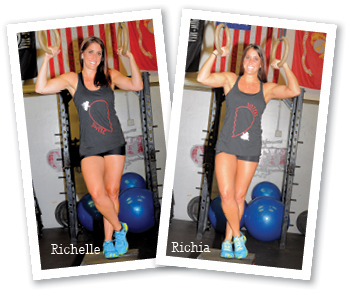 Up Close:
Below are two recipes for the twins’ favorite smoothies. They sound delicious, and are obviously working! Enjoy!

Blend until smooth. Say a thank you to Elvis for mixing bananas and peanut butter many years ago.