How Flying Solo Lead to a Life of Adventure 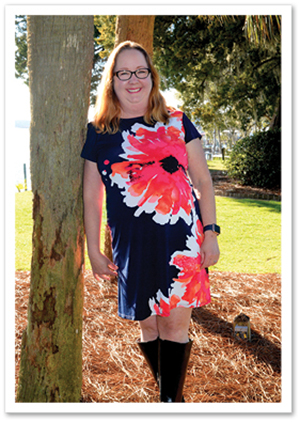 Regina Mae Banis stared at the computer screen. Four days in Paris. Two days in Rome. Includes airfare, hotel, and hop on/ hop off bus passes. The chance of a lifetime. Within two hours she had booked the non-refundable, non-transferable trip for herself and a friend. Days before the trip, her friend had to cancel. She called the travel company, and they weren’t kidding about the “non-refundable, non-transferable” clause, leaving her with two choices. Go it alone or stay at home. “I don’t think I would’ve been brave enough to book a trip like that alone, but traveling to a foreign country by myself turned out to be one of the most empowering experiences of my life.”
The roles of oldest child, wife and mother had always put Regina in the position of making sure everyone else was taken care of. “For the first time, the only person I had to make happy was me.”

I had to ask, “What’s so great about traveling alone?” Here’s what Regina had to say:

“I only had to put up with my own bad mood.” Arriving in Paris after having not slept in 24 hours, she set down her bags and hit the city, determined not to waste a minute. Within a couple of hours, she was jet lagged and hungry, and relieved not to have to worry about anyone else.

“I could enjoy things at my own pace.” Regina sat on a bench at the Musée de l’Orangerie for hours, writing in her journal and taking in the overwhelming beauty of Monet’s “Water Lilies.” Yet she navigated the Louvre, with precision and speed, looking left/ right, left/ right, left/ right, flying through the museum until she found the Mona Lisa, “which was way smaller than you might imagine,” raised her camera up above the crowd to get her shot, and zip, she was out.

“I could pick any restaurant I wanted.” She sat at a local café, writing in her journal until it occurred to her that no one had ever come to take her order. She watched others around her being served, and she got up to excuse herself. The waiter came over, apologizing. “I said, (in French) ‘It’s okay. You’re busy, and I’m hungry, so I’m going to leave now.” Making her way to a quaint bar just a couple blocks away, she ordered a glass of wine, a bottle of water, salad, and a crème brûlée. “You can’t do that sort of thing when you’re with other people.”

“It was the most self-empowering thing I’d ever done.” Language, money, transportation, general sense of direction, whatever the challenge, she owned it, overcoming any obstacle that came her way. After a couple transportation mishaps, her advice: Always have enough money to pay a taxi driver to take you back to your hotel.

Within three months of her return, Regina was on the computer booking her next trip to Paris, alone, this time on purpose.
There’s more to her travel log than Paris though, including adventures with her forever fiancé, Jonathan Lee, a.k.a. “Sailboat Jon.” I asked Regina how it is that she and Jon are able to go on so many trips. “We are intentional about it. We live simply so we can travel because it’s what we love to do.” I remember when Regina made the decision to sell her home. It was more than a house, more than sentimental. It was security. It was an anchor. We packed up dishes and found new homes for hundreds of Beanie Babies, and all the stuff that ties a person down. I kept telling her to do it. Selling a house that was more than what she needed meant freedom, and I recall her saying, “Girl, there’s a fine line between ‘free’ and ‘homeless.’” But who better to inspire you to pull up your anchor and take risks than a hot, surfer, forever fiancé from Hawaii? 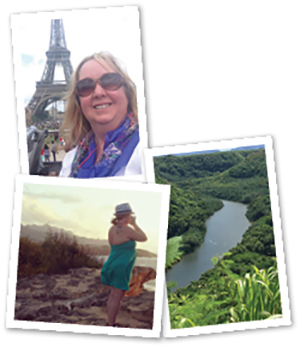 Their adventures together include big trips like Kauai, Maui, Puerto Rico, and of course, Paris, but they also manage local treks (destinations that are 3 to 7 hours away) on a regular basis. They pack for the mountains and the beach, and it’s not until they get to I-95 that they decide if they’re going left to Florida or right to the mountains. They might find themselves in St. Augustine, Amelia Island, or Fernandina Beach. They visit natural springs. He surfs. She writes. Next time they might turn right and end up in Asheville, Brevard, or Pisgah National Forest. They hike to see waterfalls. He mountain bikes. She meditates. All of their trips involve being out in nature.

Hearing their story reminds me of a quote by author Robin Sharma: “Don’t live the same year 75 times and call it a life.”
Do something different. Life’s an adventure! Enjoy it.

Next Trip: She and her forever fiancé are leaving for Maui before this issue hits the stands. Plans include a catamaran tour on Whale Day and sunrise at Haleakala.

Regina Mae Writes: Regina has written a couple of blog posts published by breathetravel.com, including “How to Eat Like a Surfer on Kauai (even if you aren’t one),” and “Why Every Woman Should Try Traveling Alone.”