Getting Married at the UPS Store 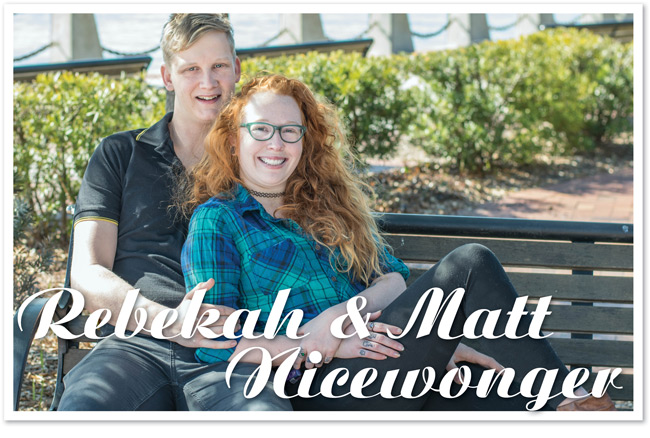 Want to hear a sweet love story for Valentine’s Day? This one starts in summer 2017, and involves a girl working at a vape store, a young Marine, Instagram, the Port Royal Sands, and ends happily ever after in the UPS Store.

Rebekah Gibson is a local Beaufort girl hanging out on her day off at the vape store when a “tall, blonde, and handsome” (her words) young man comes in to pick up a few items. Matt Nicewonger, from Dundalk, Maryland, a corporal who works on F-18s at the USMC Air Station, said it was completely “love at first sight” (his words) when he first saw her.

Rebekah is strikingly pretty, with red curly hair, creamy skin, sparkling blue eyes, and a few tattoos here and there. He told himself to be cool, not act stupid, but as he put it, he “had no words.” Glancing at her arms and hands, he shyly complimented her on the tattoos, being a fan of the art form, and having a few himself.

With a few leads from mutual friends, Rebekah was able to locate Matt on Facebook and Instagram, and a first “date” or meetup at the Port Royal Sands was arranged. They talked for hours, and then had late night pancakes at IHOP.

After only about six weeks, Matt knew he wanted to settle down and get married. He proposed, and she accepted. Quite unusual for a young lady who had travelled to work in Alaska and Seattle all by herself, and was known to her family and friends as a “Free Spirit.” This six-foot young man had knocked her off her feet as well, and she was ready to become a Marine wife, just like her grandmother. Almost 70 years ago, Helen Gibson fell head over heels for a handsome young Marine named “Red,” which is where Rebekah’s red hair is from. But that’s another love story... 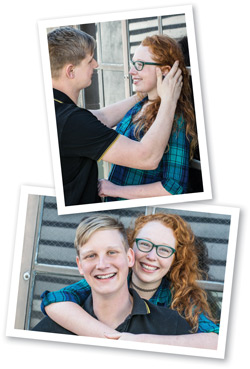 The couple obtained their marriage license at the Beaufort County Courthouse, and waited the required 24-hours while Rebekah searched for a notary public online. She learned that UPS stores offer these services, and suggested they just go to the store at Cross Creek Shopping Center in Beaufort.
They did not make an appointment, just went on Matt’s lunch break a few days later on June 21, and inquired about a notary to do the ceremony. The UPS store manager said, “Sure!” and even recited the traditional marriage ceremony words, each one saying “I do.” The store manager stamped their document, and made the required three copies. In just a few minutes, they walked out the store as husband and wife, a UPS pen as a souvenir.

Telling the parents wasn’t quite as easy. Rebekah’s mom noticed her mail in the new married name, and called to find out what that was about. She took it well after hearing the explanation. They took Rebekah’s dad out to eat, and broke the news, and he was fine with it. “He’s a really big guy, too,” said Matt.

Matt’s parents were up in Maryland, but they took a road trip to visit not long after getting married. His parents were happy to see him, and liked his new “girlfriend.” In the car on the way to a local pizza restaurant, Matt casually remarked that she really wasn’t his girlfriend; she was his wife. They were surprised, of course, but they have come around, too.

Do they have plans for a wedding or honeymoon in the future? Yes, when Matt returns from a deployment in the Middle East. They plan to have a wedding and honeymoon in November. After Matt’s Marine commitment, he wants to continue in the Air Force, working on newer and faster jets, and hopefully get transfers to bases in Alaska or Europe.

Up Close with Rebekah & Matt:
Who cooks in the family? “Rebekah,” grinned Matt. “She’s great.”
Matt’s favorite meal: Kielbasa sausage, cabbage and couscous.
Favorite place to go in Beaufort: The Port Royal Skate Park. Matt’s a BMX enthusiast, as well as a car guy.
Big prank in October: Rebekah teased her friends for several days on Facebook before announcing the arrival of Nizmo, a cute little Corgi puppy.
Matt’s advice for other young couples in love: Ask the girl’s father first!

Up Close with Blake McDonald, UPS Store Manager:
How many marriages do you perform in a month? 2-3 typically.
What does each couple need to bring? Picture ID and courthouse license.
How much does it cost? $65 for notary service. We provide 3 copies, mailing the required 2 to the courthouse. For marriage vows, performing the ceremony off site, etc., the price goes up.
How long does it take? 10 minutes, up to 20 minutes if they want vows.
Who are the couples you most see? Young military personnel, especially right before deployment.