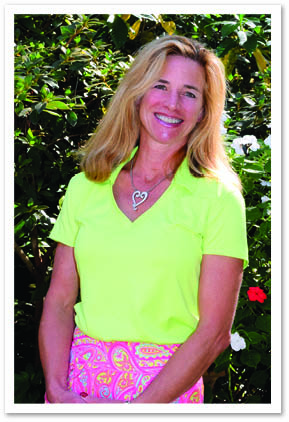 After a string of dreary, dank, dark days here in the Lowcountry, five minutes with Penny Rickard lifted the atmosphere and turned on the lights. She is a radiant woman. The theme for this month’s “Thanksgiving” issue of Pink is: Be grateful. We sought out a woman whose life embodies that concept. Penny was the clear choice.

Penny Rickard sailed into the interview on the tide of her own effervescence. She is a beautiful woman whose hazel eyes make her whole-face-smile dazzling. Her body has the taut trimness of a life-long athlete, which she is. By the age of 12, Penny won both the New York and New Jersey State Tennis Championships for her age group. Not satisfied with tennis, she also took up running and training for marathons.

She was accepted at Georgetown University in 1984 and went undefeated in dual meets as a freshman. During her college tennis career she earned team MVP honors twice. Her senior year she was presented with the Robert A. Duffy Memorial Award for the senior who best exhibits excellence in academics and athletics.

Penny graduated from the Georgetown Nursing School in 1988 and started a prestigious career as a technical consultant with Medtronics, a pacemaker manufacturer. She married in 1990 and by 1996 the couple had two young daughters and were living in Northport, New York.  Penny said, “I was lucky the way I grew up. I had advantages and lots of opportunities. I was smart, capable, good at tennis and I found a real joy and release in running. I went to a wonderful university and [laughing] guys liked me.” She had the good life and knew it.

On September 5, 1996 Penny was training for a 10K road race one evening after work. A car struck her from behind and the impact of her head on the car’s windshield shattered it, causing traumatic brain injury. Three weeks later she came out of a coma with no memory of the event, no knowledge of whether she was a man or woman and no recognition of her husband—she asked if he was a movie star.

She spent months learning to swallow, eat, talk and walk in the Moss Rehabilitation Research Institute at the Einstein Medical Center in Philadelphia. She spent many more months in physical and speech therapy. Penny remembers nothing about the accident or the year preceding the event. She still has trouble with double vision, which makes it almost impossible to read.

The accident may have been a defining event in Penny’s life, but she refuses to let it define who she is. In July 2001, five years after the accident, Penny joined a group of supporters and fans at the Northport Running Club and ran her first three miles since the accident. In February 2006, she was inducted into the Georgetown University Athletic Hall of Fame for tennis. She retired on disability but she never retired from life.

Penny’s amazing progress was a combination of her natural optimism and her years of self-discipline as an accomplished athlete. She made a choice to keep going and that’s what she does. Several years ago, after her marriage ended, she decided to relocate to Hilton Head, where she had been vacationing since she was seven and where her parents bought a home in Sea Pines in 1974.

Penny is now an avid golfer. Her late boyfriend, Tommy Horn, introduced her to golf several years ago. Sadly, he died but she was determined to continue with the sport. She said, “I opened the phone book and looked under golf courses and Bear Creek was the first one listed, so that’s where I joined. Lucky for me!” she continued, “I love the staff and the members there. It feels like they’re part of my family.”

When asked how she stays so positive, Penny said, “I was never one to say ‘why me?’ I feel truly and honestly grateful that I’m not paralyzed, that I can be in pretty good physical shape and have my independence. My mother Maureen, my sister Ellen and her husband Greg have been overwhelmingly supportive and helpful. I have been able to see my two daughters, who were six and three at the time of the accident, graduate from college.”

Penny acknowledges there are moments that are difficult but says, “I refuse to concentrate on loss. I can will myself into a better mood when I think about the things I am grateful for.” She may not have set out to be an inspiration, but that’s what Penny Rickard does naturally.

Up Close:
Proud of:  Her Red Volkswagen Bug, and her three dogs—Big Ben, Frank and Pugsley.

Fun Pursuits: Needlepointing (she creates her own patterns); walking on the beach.

Proudest of:  Her two daughters: Lacey, 24, in finance in New York; Paige, 22, an account executive with a New Jersey pharmaceutical marketing firm.