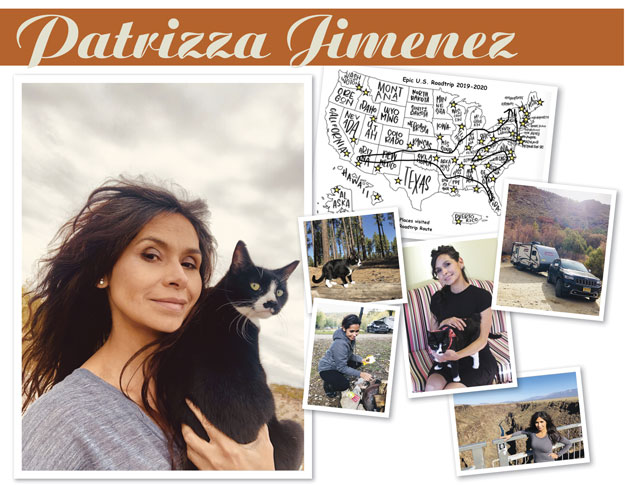 It was a typical Tuesday morning at Pink Magazine: I was sitting at my desk maneuvering between an iMac and my laptop, eager to complete a task I had been working on since the previous day. There was a stillness in the air as Elizabeth, Lindsay, and Jacie were deep in concentration in their respective offices—until I heard the front door open, and Elizabeth’s footsteps headed to the office lobby. Not paying much mind to our new visitor, I dove back into my laptop. Just a few minutes later, Elizabeth’s voice pierced my focus: “Rinsha? Jacie? Will you come here, please?” Inquisitive, I followed the voice to the lobby where I saw a small-figured woman in front of me, introducing herself as Patrizza. There was a power and vibrancy about this woman that drew me in; I was instantly intrigued;  When Elizabeth shared that Patrizza had stopped in while doing a 25-state tour of the United States and asked who would like to interview her, my hand shot up immediately. I just knew she had something incredible to share.

Within just a few seconds of being with Patrizza, I was immersed in her world. She began this road trip when her life came crashing down in 2016, being diagnosed with early breast cancer. After innumerable tests and opinions, Patrizza learned that her only option to fight her cancer was to undergo a double mastectomy and have numerous reconstructive surgeries. However, 10 surgeries and a lifetime worth of trauma later, Patrizza realized that reconstruction was not going to work for her body. “I came to peace that I didn’t want to damage my body any more by trying. I had lost 90 percent of use of the right side of my body because of nerve and tissue damage, phantom pains, and I had a nonexistent range of motion, she said. It was tough. And, I took care of myself, nobody else did.” After this horrifying experience, she was left with many questions: Who am I? What is my purpose? How did I get this disease? Thus began Patrizza’s quest to connect with her true self.

Patrizza came to understand early in her life that she would have to take care of herself. Raised in California by her grandmother, she was told she must always be strong. “She said it all the time: ‘Nobody will take care of you better than you will.’” Estranged from everyone in her family, she shared, “I always felt like something was missing in my life, and I told myself I better go look for what that is now, or I never will.”

A few short months ago, Patrizza was in Alaska for work and found herself on the phone in the middle of the day booking a camper and buying an SUV in New York. “My way of healing from something—mentally, physically, or spiritually—is traveling,” she shared, as I watched her eyes begin to light up. “I didn’t care if this was a financially sound decision.” In a matter of a few days, she had made arrangements for all of her belongings, headed home to New York, packed what she needed for her journey, grabbed her trusty companion and friend, Cookie the cat, and was off.

“With no plan?” I asked, chuckling at the sheer panic that was overcoming me in just the idea of ever stepping out of my house without a plan of where I was going. Her reply was straightforward: “Yes, I just needed to go where I could discover my roots.” Having recently learned about her primarily Native American heritage from ancestry.com, she knew she needed answers.

The most important stop of Patrizza’s trip, therefore, was her trek to the Taos Pueblo Reservation in New Mexico. “New Mexico definitely has a piece of my soul,” she shared, as a solemness overtook her spirit. It began with her last visit to the state, just after her surgeries. She went there to visit a cousin she only knew of through ancestry.com. There, she met a man named Patrick (His Native name is Standing Deer) in his open workshop in the middle of the dust. Her eyes gazed his handmade tomahawks and gleamed at his painted buffalos. “I didn’t know this man, but I felt something deep there. We’re talking, and I find out he’s from the Hopi tribe, and I am Hopi as well.” Patrizza found her eyes swelling up as she began sharing with him about her journey to find herself. “Patrick pulled one of the tomahawks from his wall, gave it to me… ‘It will protect you in your travels. May you find yourself. God bless you.” I carry that tomahawk with me everywhere. It’s protected me. Before I left that day, Patrick invited me to come back and wash my face in the river to renew my spirit.

Returning back to the reservation on this trip to see Patrick was imperative; he was the biggest motivator she had to take the leap into her journey. However, when she got there, she was informed that he had suddenly died, just two weeks prior. Heartbroken, she sobbed as she walked the path of the sacred river. She shared her story with a man who spotted her, who then proceeded to make a phone call to Patrick’s sister, a tribal council member who then came to greet her. “We gave each other a hug and consoled one another. It was still fresh. I was invited to stay for a week. That was the last time I saw them, but before I left they granted me the permission I had been seeking all long—to be able to wash my hands and face in the sacred river. It was hard, but I now feel connected to my Native American roots. It was something I needed to do. It truly renewed my spirit, and I carried on.”

Patrizza’s road trip was originally set to end in December, but it’s continued on, just like she always has. “Once you do something like this, it’s in you. I’m living my life to the fullest like there’s no tomorrow, because there just may not be,” she said. “I’ve never felt like I belonged anywhere. I now know I belong everywhere, and I like having my home everywhere I want to take it.” Going from city life to living in remote areas has been a positive change for her, and has also challenged her to realize she can do anything she dares. “I’ve become patient. I’ve learned things cannot be controlled and you just go with it. Even in times that seem like a serious emergency, I’m just so calm about it. And I can do it all as a woman. I can drive and back-up a camper as a woman. I can fix the trailer’s propane tank as a woman, and I can take on the scariest challenges life throws at me—as a woman.”

Up Close:
Do you have any states left to conquer? Yes. Wisconsin, Nebraska, North & South Dakota, Iowa, and Minnesota; just six more.

Tell us more about Cookie, your cat: Cookie is my emotional support pet. I travel everywhere with her. I got her nine years ago. I get really bad anxiety, which only increased after the surgeries. I was having nightmares, didn’t know whether I was going to live or die, and she was there for me. She would lay right on top of my heart and breathe with me. She has been there for me through this whole journey.

What’s the wildest experience you’ve had on this trip? Cookie and I got stuck on a cliff in the middle of the night in the NC mountains. My GPS went out; I was going in circles, running out of gas. I was scared because I had no idea what was out there. I made arrangements to go to a camp that night, but never found it. It was all unpaved dirt roads and loose gravel. One side was the mountain, the other was a cliff. I definitely didn’t know how I would get out of there that night, but I did it.

What’s next? I am currently in Sarasota, FL, and plan to be on the road until at least May. I also hope to inspire others to just go out there and discover themselves, and am working on possibly creating scholarships!