Flying High for Her Beliefs 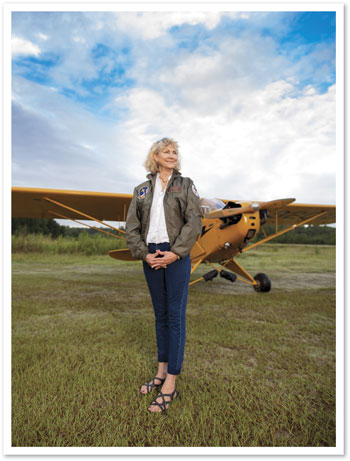 Patricia “Pat” Denkler is a lady who is comfortable: in her home; her retirement; and especially in her direction in life. She and her husband, Michael Harris, live in a beautiful home overlooking the Intracoastal Waterway, surrounded by antiques, books, fresh from the garden flowers, and a sweet old golden retriever. Her serene life now is very different from earlier years.

Encouraged by the late Commander John McCain to apply to the Navy Flight Program in 1977, Pat became one of first women Naval aviators. There were approximately 15 women accepted per year into the Aviation Officer Candidate School (AOCS), and the training was rigorous. In her boot camp platoon, there were only two women in a class of 25. In preparation for the grueling physical aspect of training, she ran three miles in the sand each day to build up her strength.

She went on to become the first woman to land a jet on an aircraft carrier. “Joining the navy was the single best professional decision I ever made. There are absolutely no words to describe the camaraderie and patriotic feeling associated with serving one’s country,” she declares.

After leaving the Navy, she applied to and was accepted by Delta Air Lines. She worked with Delta for 31 years: “The second best decision I ever made,” she says.  As a 767ER international captain, she usually flew three or four trips per month, allowing her to have the time necessary to become involved in where she lived.  For many reasons, in 1988 she chose Beaufort (S.C.) as home.

These days her goals are simple. First is adorning fresh-from-her-garden flowers in every room of the house. The day I visited, Gardenias filled the house with Southern sweetness. She loves to read and write/record in a journal in pencil each day. She has done this since she was 8 years old and has a trunk of journals to prove it. She also seeks to write personal notes to friends or family members on a weekly basis. Personal, handwritten letters in this day and time? Imagine what a gift these are to receive in the mail.

The rest of her day is just as structured and well-thought out. She does not want to waste time “repeating herself,” she says, and wants to do new things. Not long ago she sold her last personal plane, a J3Piper Cub. She and her husband have bought a 26-foot Nonsuch sailboat on which she is learning to sail. “We are like a couple of five-year-olds!” she laughs.

Sought after by worthwhile causes and organizations, Pat is presently serving as a board/advisory board member for the Beaufort County Open Land Trust (BCOLT), AMIkids Beaufort, and the Pat Conroy Literary Center (PCLC). The diversity of each association is a direct reflection of her many passions in life.

She has a talent for organization and loves to put it into action. For example, she orchestrated an author’s book launch through the Pat Conroy Literary Center last year that was a huge success. She is also a regular organizer for the Croquet Picnic held at Brays Island, which benefits the AMIkids program in Dale, S.C. for misled young men.

Being involved with the Beaufort County Open Land Trust since the early 1990s, Pat has seen the visions of the organization continue to manifest itself over the years. Most recently this was evidenced in the acquisition of acreage for Whitehall Passive Park, one of Beaufort’s greatest treasures, which will be enjoyed by many—visitors and citizens alike. 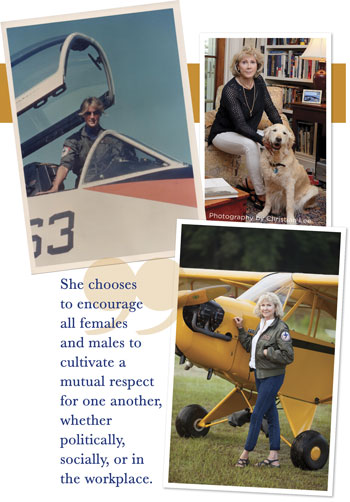 After seeing her library of bookshelves in every room of the house, Pat Conroy remarked to her:

“Your books are the story of your life,” and she agrees. She has the books from her childhood, adolescence, young adulthood and professional aviator manuals all arranged in order on their own shelves.  There are books about Navy heroes John McCain and Jeremiah Denton, of course.  There are Pat Conroy books, and many other Beaufort authors from her “adopted hometown.”
Pat has much experience and community vision she wants to share with young people in the area. She is quick to say, not just to young women. She chooses to encourage all females and males to cultivate a mutual respect for one another, whether politically, socially, or in the workplace.  Pat has tried living her life in that manner, so that others may thrive in their own lives.
For Pat, one such person who was highly influential in her life on every level was Rosemary Mariner.

“I recently attended the funeral of Captain Rosemary Mariner, one of the original six women Navy pilots to receive their wings in 1974. It was an honor to witness the culmination of her life and legacy: Four F/A-18E/F Super Hornets flown by female aviators performed the “Missing Man” formation for the first time in history. What was once unthinkable, can now be standard operating procedure.”

What does the future hold for Patricia?  “Absolutely to continue working with the organizations I feel so passionate about…mentoring in some capacity…and, ideally, to become politically involved with a candidate who I can support in these extremely trying times. The ultimate, however, would be to write a children’s book!”

One thing is for sure. Any organization or project Patricia puts her powerful energy into will be propelled to fly high.