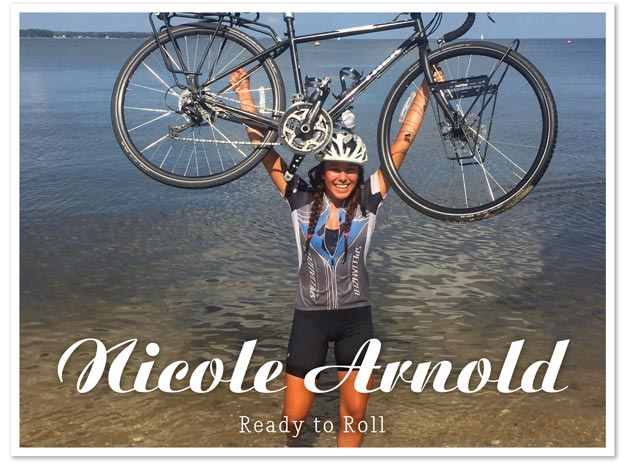 Four years ago, Nicole Arnold was approaching graduation from Hilton Head Island High School and craving some adventure. After brainstorming a variety of ideas, her biggest passion led her on the greatest journey of her life so far. With a whole lot of planning, dreaming, and researching, Nicole set her goal: To bike across the United States.

For as long as Nicole can remember, she has been glued to a bicycle seat. Always an independent child, she would spend hours biking around her island neighborhood. When she road, she had a box on the back of her bike to keep her belongings in— little did she know, this would prepare her in achieving her dream while traveling with ease.

On June 2, 2016, the day after graduation, Nicole flew solo to Oregon to embark on her adventure. She rode the Trans American Trail, which took her to the coast of Virginia. She quickly met two other women headed on the same path, and they stuck together all the way to the Atlantic. When she began her journey, she rode with four panniers (bike saddlebags)—two beside the front tire and two on the back. The front two ripped early on, and after multiple tries with duct tape, Nicole decided to let them go.

“I had met people who were only traveling with two rear ones, so I figured if they could do it, I could do it,”  Nicole said.

“Everyday I would wake up with the sun, eat oatmeal with a bunch of peanut butter, take down my tent, pack everything up and get riding. I would stop at gas stations to refill water, and it was always a luxury if I could find ice.”

Nicole never felt fear, as she planned everything out and always thought ahead. “Maps had the campgrounds, hotels and hostels marked along the way. That made it really easy to decide how far I wanted to go and where to end each day,” she explained.

The 4,000-mile journey took Nicole 71 days to complete. Most days were filled with beauty, discovery and hard work, but it took her a long time to see progress on her map of America, which brought along mentally challenging moments. “It felt never-ending; I just had to keep reminding myself of the goal and keep on pedalling to achieve it.”

The ride took Nicole to places she had never been before. Her journey through Idaho to Jackson Hole, Wyoming, was the most shockingly beautiful part of her tour. She biked along the Salmon River, dotted with many small towns and mountainous terrain. “It was a scene straight from a postcard. The mountains were capped with snow, and it seemed that if I stayed on the road I was on, I would eventually reach those snowy peaks. The sun was out, there was a breeze and the numerous blue lakes filled me with excitement,” Nicole said.

The biggest discovery she made was how little we humans actually need in order to live. “I didn’t think it was possible to live off of so little, because growing up I always had a closet full of clothes and lots of options. But on this trip, I was wearing the same thing every single day, and when I would do my laundry, I would wrap myself in my bath towel, or borrow a t-shirt from a free pile at a random hostel.”

This new mindset is what led Nicole to her next big adventure. After a semester at Loyola University in Chicago, she decided to transition to online studies. Working as a full-time nanny, she was able to find balance, create her own schedule and have freedom to move around with online college. She didn’t see herself being in one place for long. When the family she nannied for moved out to the West Coast, Nicole followed along. Still not ready to commit, she went back to what she’s most comfortable with, being on wheels. This time, Nicole lived in a van in San Francisco for almost two years.

Since then, she has stayed busy adventuring. After completing her degree in general studies with an emphasis on inner cultural understanding, Nicole has accomplished another bike tour and backpacked through Peru. Now back on Hilton Head, she has started renovating her van while searching for a job—ideally one she can do remotely in the comfort of her home on wheels, ready to roll to her next big adventure.

Her Must-do Bucket list adventure: Live on a sailboat

Favorite Place she’s explored: Pisac, Peru, which is a little hippie town located in the Sacred Valley filled with yogis and many spiritual rituals.

Favorite thing about island life: The ability to bike everywhere

Most proud of: Her bike tour across the United States