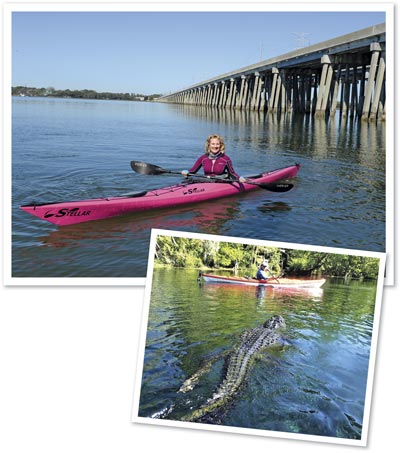 Five years ago, Nancy Stills retired and moved to Sun City, SC. She tried to join the kayak club, but she didn’t have a kayak, gear, or a means to transport a kayak. She was referred to “Swampchick” Linda Etchells, who adopted Nancy, loaned her a kayak and gear until she bought her own and taught her to be a great kayaker. She also nicknamed Nancy “Grasshopper.” In exchange, Nancy became the Swamp Dragon Drummer for Dragonboat Beaufort, a non-profit organization that raises money for cancer patients.

Once she acquired her own gear, she joined the Sun City Kayak Club, where she served as both vice president and president. “We are fortunate in Beaufort County to have over 30 public kayaking/boating access points within a 30-mile radius, providing miles of fresh and salt water to enjoy,” she said.

Grateful to Bill Dickinson of the kayak club, who organizes many of the club’s trips, Nancy has paddled from island to island in Costa Rica, sailed a kayak from Belize Half Moon Cay and paddled long distance on the Suwannee River. Her most recent trip last month was paddling in the Florida Everglades. “I am thrilled every time I slide myself into a kayak to paddle,” she said.

“My most favorite paddles are being with critters in and around the water, and finding a way through marsh grasses so tall, with snails and bugs everywhere, that there seems no way out. I have dealt with a friend’s heart attack at a remote river location. And, of course, there’s the alligators. Once on one of our many Florida paddles, a 15-foot gator appeared alongside my kayak and then swam from me to a friend’s kayak across the way. It was the biggest in-the-water gator I’ve ever seen. I was so excited to photograph it, I didn’t have time to worry what came next.”

“But honestly, my biggest thrill is also my lifelong handicap: I have zero sense of direction. I have learned to keep up with the person paddling up front because of my fear of being left behind and lost. And there’s always that itch I’ll get distracted taking photos and end up who knows where.”
She has been an avid yoga practitioner and teacher most of her life, and since retiring, she is combining her skills as a writer and photographer with her love of kayaking. She combines international yoga retreats with photography and writing for  local magazines or kayak companies to subsidize the cost of her travel. She has gone on three of these trips so far: Kayak Sorrento on the Amalfi coast of Italy, Bali Indonesia and an eco-island off Puerto Vallarta, Mexico.

Nancy has been “in love with the water forever.” Her first experience on the water was as a kid on a lake in Connecticut. “I stole a red canoe behind my parent’s house and paddled out to the middle of the lake. I was probably 6 or 7, and boy, did I get in trouble for that!”

“My mother always told me I had wanderlust. She gave me a music box that played ‘The Happy Wanderer,’ and later she gave me the book, ‘The Places You Go.’”

Nancy has learned to be a confident and competent paddler. Over 25 years ago a friend invited her on a guided canoe and camping trip on the St. Croix River on the Maine/Canada border for an exciting, authentic wilderness experience. The water was fast-running and Nancy had insisted on paddling her own canoe. She hit a rock and the canoe flipped over, but Nancy quickly jumped onto the rock, and after righting the canoe, she continued on. Before the day was finished, however, she went over a waterfall backwards, not once, but twice.

While in an extremely remote location in Kenya during four years in the Peace Corps, Nancy had to routinely paddle alone through very isolated areas with lots of dangerous wildlife in order to go to the village market for supplies, or to carry mangrove seedlings for planting.

“For me everything has always been about the water,” she said. She became a scuba dive master (person in charge of rescues) while in Guam and has dived in Australia, Guam, Japan and on the Micronesian Islands.

“It’s funny how we outgrow the things we once thought we couldn’t live without,” Nancy said. “And then we fall in love with what we didn’t even know we wanted. Life keeps leading us on journeys we would never go on if it were up to us. Don’t be afraid. Have faith. Find the lessons. Be inquisitive and go play!”

All in the Name: She named her first kayak “Dragonfly.”

Reaching Out: She also worked at the International Red Cross.

Critter Control: While at a yoga retreat in Bali, her luxurious quarters had an uninvited intruder: a white-nosed coatimundi that destroyed her laptop! A coatimundi is a rather cute omnivore with lots of energy and loves to forage.

Make New Friends: Nancy believes kayakers are the friendliest people on the planet and are always helpful.