Cruisin’ with Corona: The Excursion They Didn’t Pay For 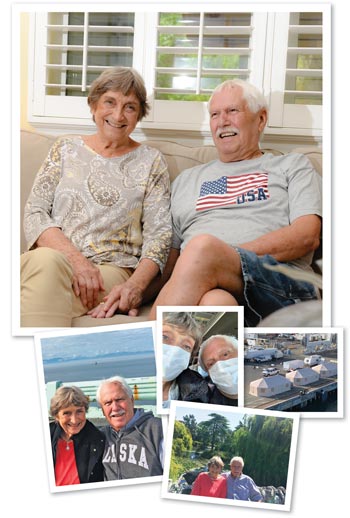 On February 20, 2020 in San Francisco, California, Nancy LaPointe embarked on the Grand Princess cruise ship with her husband Jim for a 15-day adventure through the islands of Hawaii. Being long-time cruise-goers, this trip’s route was familiar to them, and they were thrilled to be cashing in on certain amenities they had earned over the years; most excitingly, she was ready to enjoy a large balcony. Unbeknownst to Nancy, she was going to be spending a lot more time on her balcony than originally planned. As Nancy and her husband were reveling in the excursions of the cruise ship and of Hawaii, the novel coronavirus was beginning to penetrate the United States. Two days before the journey was set to end, Nancy and Jim began a new excursion that was not exactly one they paid for.

Nancy first noticed something was awry on the thirteenth day of the trip. “We headed to the breakfast buffet as usual. Nobody said anything, but everything was different. All the crew members wore gloves, served us our food themselves, including any coffee, tea, salt and pepper. We assumed it was norovirus, which is common on cruise ships. Later, after lunch, the captain of the ship came over the intercom and said, “ ‘We need to inform all of you that we have two confirmed cases of coronavirus aboard the ship. Everyone must immediately go back to their rooms and isolate themselves for the rest of our journey. Everything will be closed. We will not be making any more stops and are headed back to California.’”

Nancy and Jim’s ship stayed out at sea for an additional eight days, with plans changing numerous times a day. Their three meals were served outside of their door, and room service provided coffee, tea and fruit with a two-hour wait. When the ship was finally allowed to dock in Oakland at a freight port, they were at the port for two full days and the rules changed every time the captain came over the intercom. There was excitement, only for them to then be told they would be among the last to disembark.

While the uncertainty of what lied ahead caused frustration and anger in many, Nancy and Jim had a more uncommon outlook on the situation. “Worry is a waste of energy and time.” Having been a member of the U.S. Army and a two-time cancer survivor, the adventure of not knowing and being uncomfortable was not foreign to either Nancy or Jim.

“In 2011, I was diagnosed with bone marrow cancer. We went through this for almost three years, and were in the hospital together for 94 days, so it taught us a lot of patience. My radiation then gave me leukemia, and I beat that too. I wasn’t supposed to keep living, and each day I didn’t know if I would wake up the next. If you don’t expect anything, you’re never disappointed,” Nancy shared with a smile. “We’re old, so we can handle anything!”

Disembarking the Grand Princess, Nancy and Jim each held a carry-on bag to get them through the next 24 hours as instructed by the captain, as they headed to Lackland Air Force Base in Texas. They were put on a bus and transported to the airport, where they discovered the base was no longer accepting them. The couple boarded the flight to Dobbins Air Reserve Base in Marietta, Georgia, instead. As adventures go, though, their luggage headed to Texas without them. Nancy and Jim quarantined for 14 days on the base in barracks with minimal accessibilities and with guards around the entire enclosure so nobody would leave. The adventurous couple just focused on what they had power over. “We had a TV! And we were allowed packages, so Jim’s oldest son sent them a care package with the essentials and some nerf guns to entertain these two children at heart. After their quarantine, Nancy and Jim returned to their home on Hilton Head Island to quarantine yet another two weeks. A trip of 15 days became an entire seven-week adventure.

As said by Steven Furtick, a Charlotte, NC pastor, “Your perspective will either become your prison or your passport.” A virus that wreaked havoc over anyone's vacation is enough to get most people feeling trapped. Nancy is truly the epitome of what it means to take on learning something new at all times, and truly allowed this experience—and all of her life experiences—to serve as her adventures.

Celebrate: Nancy and Jim will soon be celebrating 40 years of marriage. While they have lived on Hilton Head Island for 16 years, they are both originally from Illinois. “When you can be together for 60 days straight and still be civil with one another, that’s how you know you’ve made it.”

Gratitude: “I want to shout out to so many people who supported us through this difficult time. Princess Cruises, as they did the absolute best they could, Clinique, Chik-fil-A and the Dobbins Air Reserve Base. They all went out of their way to make us comfortable and provide us with supplies.”

What’s Next: “My ultimate dream is to live on Hilton Head in the winters and a cruise ship in the summers. That hasn’t changed a bit. I’m still going to keep cruisin’ with Jim.”