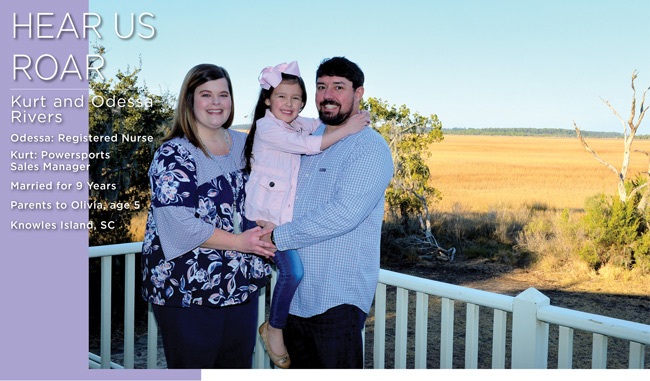 Give us your version of how you met:
Kurt: We went to the same high school and were high school sweethearts.
Odessa: We knew of each other in high school, and after talking at a friend’s party, Kurt called me a week or so later. We started dating the summer I turned 16 and he was 15, about to turn 16.

What’s the last goal you set together and achieved?
Kurt: Our recent home remodel.
Odessa: Planning and actually remodeling our home. We knew we wanted to remodel when we bought the house to make it larger and finally got someone to start this past fall. We had no idea how exactly what we were getting ourselves into, but are so glad now that we stuck with it!

What do you think the key to “happily ever after” is?
Kurt: Compromising, compassion, supporting each other, forgiving, and love.
Odessa: Realizing that it won’t be “happy” all the time and still committing to making it work with your spouse. I got the best piece of advice at our wedding from someone I’ve known my whole life: She said, “Don’t have a plan B.” There will be bad days and hard days, but you will make it through and have plenty of “happy” days!

What’s the most meaningful thing you’ve done as a couple?
Kurt: We became parents.
Odessa: I agree, having Olivia changed our marriage, for the better. The road wasn’t easy for us to have her, but it drew us closer to each other and I wouldn’t change a thing!

How has being a foster parent changed your life?
Kurt: I have learned to love any and each child who comes into our home in an unconditional manner, without reservations.
Odessa: It’s made me have gratitude for things I often take for granted, and it has opened my eyes to a whole new perspective. We both grew up in a bubble of safety for the most part. So, to enter the foster care world and hear many of the stories, is heartbreaking, not only on the part of the child, but of the parents, who often times were foster children themselves. It’s definitely broadened my global perspective on the orphan care crisis is happening not only in our country, but all over the world.

How has being a foster parent changed your life?
Kurt: It’s something that we’ve talked about for years and felt we were called to do it.
Odessa: We didn’t begin fostering in order to add to our family; we are open to it in the right scenario, but reunification with birth families is the No. 1 goal of foster care. Quite simply, we felt the Lord called us to do it, and we said yes. One day I looked at Kurt and said, “We have the space, we have the love, we have the support, we want to help these children, why aren’t we?” The next day I called and got us set up to start the process.

Odessa—what three things do you think makes Kurt rock?
His willingness to go along with my sometimes crazy ideas, the way he doesn’t mind getting on the floor playing with children and his easy-going attitude.

Kurt— If you could describe Odessa in 3 words, what would they be?
Intelligent, generous and kind.

Tell us about a moment you looked at each other and wondered, “What are we doing?”
Kurt: It happens daily, so it’s hard to think of one particular incident.
Odessa: About five minutes after our first (foster) placement came and the social worker left. It’s a very odd process to add a foster child into your home, it’s pretty quick, there’s a little paperwork and then you’re left with this child that you know almost nothing about…and you are their family now.

Odessa—Tell us about Kurt’s best Superdad ability:
He is always—I mean always—willing to take kids outside, or on the golf cart, or whatever, if he sees I need a moment of peace and quiet. I usually don’t even have to ask, he just does it and it’s awesome.

Kurt—Tell us about Odessa’s most surprising hidden talent:
She’s very creative and loves crafting; it’s already rubbed off on our daughter!

What is the biggest lesson you’ve gained from children?
Kurt: Live in the moment, and life is better when lived for others. .
Odessa: You always have more than you think and sometimes simpler is better.

We are roaring about…Foster care! If you can’t tell, we’re pretty passionate about it. I love the quote by David Platt, “Orphans are easier to ignore before you know their names. They are easier to ignore before you see their faces. It is easier to pretend they’re not real before you hold them in your arms, but once you do, everything changes.” Everything changed for us when we opened our eyes, and we want to be able to help others walk this journey. Even if someone is not called to be a foster parent, we do feel that they are called to assist in some way. There are lots of ways to help in our local community; you just have to say, yes!

An Excerpt from Odessa's Instagram @theriversfam: To you it’s the gas station in town. To me, it’s the place where I said goodbye to my foster daughter over six months ago. Meeting a social worker here with a few hours notice was not the way I planned this goodbye. Actually, nothing was like I planned. That’s the thing about foster care though, it’s not really about me, is it? Not even a little bit. My type A, organizing, planning self gets to take a backseat here. It’s unpredictable, it’s messy, it’s chaotic, it’s hard, it’s frustrating at times. But y’all, it’s so worth it... There isn’t a week that goes by where our family doesn’t talk about the little ones who’ve shared our home. I’m sure we think of them even more. They’re part of our story, part of us. So here’s to unexpectedly taking a walk down memory lane as I drove by this gas station this morning. I can remember the “why do I have to go” in my kitchen, the fixing just “one more” mac-n-cheese for the ride, the unasked questions in her eyes and the empty car seat on the ride home. #thisisfostercare This is what we signed up for, the hard, the sad, the joyful, the unexpected. We’d do it again in a heartbeat if it meant one sweet soul was safe for just a day.