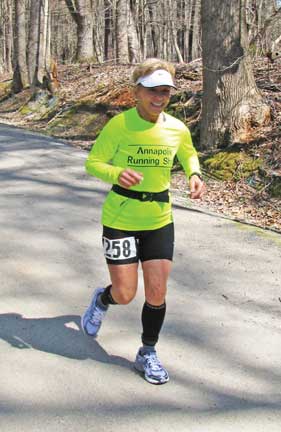 At the age of 45, Maria Shields decided to take up a new hobby-running. She began by running with a neighbor three to four miles a few times a week, until this neighbor noticed her excellent running capabilities. He was training to run a marathon at the time, and encouraged her to run one as well. "Are you crazy?" she responded, "I could never run 26.2 miles!" Now, just 16 years later, she runs races all over the country, averaging more than 2,000 miles on foot each year, and at the age of 62, has just broken the record for the fastest 100-mile time for her age group, at 21 hours and 32 minutes.

So how does such a passion and talent develop from what can hardly be considered a hobby? Focus, determination, and a little goal-setting. In 1996, Maria ran her first marathon, the Marine Corp Marathon. Soon after that race, she set a goal to run a 50-mile race at the age of 50. After accomplishing this goal, Maria moved to the next level-to conquer 100-miles. In April of 2012 she ran her first 100-mile race at Umstead State Park in North Carolina, finishing with a time of 22:52. She had predicted it would take her close to 26 hours, so, of course, she was pleasantly surprised when she came in far below. It wasn't until after the race that she and some friends researched and found out that the record time for her age group was 22:15. This nugget of information spurred Maria's determination to beat the record, which she accomplished in less than a year! "I am getting more addicted by the day! I keep setting goals for myself, and by the time I accomplish them, I am on to the next" laughed Maria. "Running keeps me focused, healthy, and young. I'm very competitive and I love to stay challenged. I would say running is probably 80 percent of my life."

As I spoke with Maria, I could sense an excitement and enthusiasm about her that only comes from someone who has truly found her calling in life. She has raced all around country, and the world, including California, New York, Ireland, and Boston many times. Already in 2013, she has run a total of 1,100 miles, including two marathons, one 50-mile, and one 100-mile races. She lives half of the year in Annapolis, MD, where she is a member of the Annapolis Striders, and also trains with the marathon coach at the Naval Academy. The other half of her time is spent at her home on Hilton Head Island, where she runs many of the local races, ranging from 5K's to full marathons. "I like to run in Hilton Head races, because I win most of them," she humbly giggled.

Anyone who has run a race knows the extreme dedication and discipline it takes to complete the months of physical training necessary to make it to the finish line, but it also takes an extraordinary amount of mental toughness, as well. Maria described her experience running her first 100-mile race with an attitude of pure focus and determination. "We start at 6 a.m. and run eight 12-mile loops, which keeps us running through the night. I only stop to eat a few times, potty, and refill my bottle with water, but never more than three or four minutes. I don't listen to music, I just run. I stay focused and only think about the finish line. Many people do not
have the energy and endurance to do what I do; it is 95 percent mental."

Maria's strength of will and endurance comes from deep within her, but it also stems from a large support group of family and friends who have encouraged and supported her in all of her goals throughout the years. She gives a lot of credit for her successes to her best friends Laurel and Deni, and Naval Academy running coach, Dr. Thomas Hatter, who all have inspired her to move forward, helped her train, and come to races throughout the years. She also leans on her husband, Buddy, who has remained patient and supportive with her passion and the amount of time it consumes in her life. Although many goals have come and gone, her greatest goal in life is to motivate women to run and stay active in the way she has been motivated by so many people in her life. "If nothing else, I hope to inspire women to start running, and I am a perfect example that it is never too late. Running is good for your physical health, and your mind. Always move forward, don't ever stop."

Up Close:
Next goal: To be chosen to run in the Western States Endurance Run, the world's oldest and most prestigious 100-mile trail race, beginning in Squaw Valley, California.
Inspirational training literature: Relentless Forward Progress by Bryon Powell, Ultra Running Magazine, and Irunfar.com. In March she was listed in Ultra Running Magazine as the Best Overall Runner in the country for her age group!
Heritage: Maria came from Portugal to the U.S. at the age of 16. "I am so glad my parents moved me here. Portugal is beautiful, but I would never want to live anywhere but here."
Nickname: Nika
When will we see Maria back in HHI: Hopefully by the Fourth of July to participate in the Hilton Head Firecracker 5K. Look for her crossing the finish line!