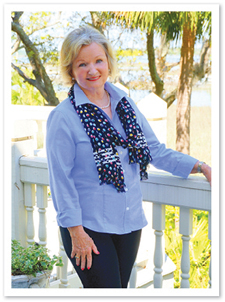 Margaret McManus greeted me at her front door with a lively little dachshund dancing excitedly. “The trainer says we should just try to ignore her, and go on with our conversation normally,” she explains. I try, but it’s hard because this little dog, Clara is really sweet and obviously wants to be in my lap and petted. I restrain myself, and eventually she bounces off happily to her chair.

Like her little dog, Margaret is petite, energetic, interested in me and charming. Her blonde hair is stylishly casual, her eyes sparkle, and she smiles like she’s always on the verge of a big secret to share.

Her professional career is definitely impressive. She was an analyst for the Central Intelligence Agency for 22 years, specializing in economic issues. Her job was to brief government policy makers on economic and transnational issues in many different countries, particularly Japan. She worked in the “Downtown” office of the CIA, McLean, Virginia, but her work involved extensive travel world-wide, fueling a lifelong love of travel and exploration of different cultures. She also lived in the Philippines for two years, while married to a CIA professional, and had her first of two children there in a mission hospital.

Since moving to Hilton Head Island eleven years ago, she has embraced the Lowcountry culture and plugged her professional expertise into several organizations. She is currently the Vice-President of the World Affairs Council of Hilton Head Island, a community discussion group that now boasts 1,200 members! The group meets twice a month and has such talks as “Japan Restored: The importance of a strong Japanese economy to the U.S,” and “Can Putin and Trump Cool Tensions Between Russia and the US?” Pretty erudite topics, but Hilton Head has so many retirees from the military, government and business sectors who were directly involved in these fields that their meetings are lively and well-attended. The Hilton Head location draws speakers who are world-class experts to come talk and also visit the island’s beauty.

Another organization that is very important to Margaret is the Women in Philanthropy group (WIP), which is a women’s giving circle under the auspices of the Community Foundation of the Lowcountry. She is currently the Chairwoman of this group, and her eyes really shine when describing the many grants the group has funded. She points out that women “hold the purse strings” more and more, and giving is something women do naturally. Her group thoroughly “vets” the many applications they receive through interviews and committee discussions, and require a year-end summary of the outcomes achieved through the WIP support.

Margaret mentioned several projects the WIP have funded that she was most proud of: “Empowering Women,” a program educating high school girls about ways to empower themselves, that was picked up by a private donor for continued funding; kayaks to take local students into the rivers that surround our area, many who had never been in them; and sponsoring a Habitat for Humanity house, completely “Woman Built,” with assistance from Habitat for Humanity staff, but given to a single mother as her first home.

Her critical and analytical thinking skills from CIA days tell her that making these investments in young women’s immediate needs will reap huge returns in the future. She stresses it’s so important to give back, but be smart about your giving. Always ask the questions “Why?” before writing a check and “How?” will this money make a difference, and investigate as much as you possibly can.
She smiles and tells me her two big activities keep her balanced and active now in her retirement years. “The World Affairs Council is for my head, but the Women in Philanthropy group is for my heart,” she says with a twinkle.

I mentioned that the theme for this month is “Be Smart” and wondered if she had any advice for Pink readers to be smarter. “Well, I can tell you the smartest thing I did when I moved to Hilton Head Island!” she quickly replied. “I became a docent at the Coastal Discovery Museum, and learned my new place!” She went on to explain that docents receive a six weeks training program about the history, the plants, animals, and special secrets of the Lowcountry she would never have discovered on her own. She continued to volunteer her time at the museum leading school groups, interested tourists, and history buffs with topics ranging from shrimp to Marsh Tacky horses, to the early Indian natives who lived here.

When pressed for more ideas to become as smart as she is, she advised me to always read the newspaper, either online or in your hands as newsprint (even better). She reads The Island Packet, The New York Times and The Washington Post, just to name a few.

It’s also smart to be involved in your community, she said. She served as secretary of the Windmill Harbor Homeowners Association, Editor of the community newsletter, and is a member of the South Carolina Yacht Club, where she is on the membership committee, and a member of the “Salty Sisters”, a sailing group for women. She is famous in the community for two big parties: July 4th and Halloween, in which her garage is turned into a prom-like atmosphere with a spooky theme. “I just love parties,” she confessed.

Finally she advised to always stay positive, no matter what. The people who are academically and intuitively smart are almost always positive people. They also have a lot more fun!

Nickname: Her children (a boy and a girl) and grandchildren (3 boys; 16, 14, 11) call her “Merm.” This was coined from the word “Angiospermae,” which her daughter loved in high school, and dubbed her with.

Traveling with the Grandkids: “They are visiting our beautiful country first, before seeing the rest of the world. They are visiting the national parks, and she requires that in every state they visit, they must go to the state Capitol building and take the tour. It was quite a ways in South Dakota, while visiting the Badlands and Mount Rushmore, to get to Pierre, but the boys knew it was non-negotiable.”

Figure it out: She loves to research questions that puzzle her. She relishes combing the Internet and will spend hours finding the answers to medical issues, such as “Why did my toenail change color?” for example, and loves the challenge. Some things about CIA agents never change.