The first word that comes to mind upon meeting Laura Ludwick is “Alive!” A bundle of enthusiastic joy greeting every moment with unbridled optimism. Whether it’s her current assignment as a houseparent for exchange students at Hilton Head Prep or snuggling abandoned babies in orphanages all over the world. Laura’s brand of missionary work is about love and spreading the work of kindness everywhere she goes, and when Laura says everywhere, she’s not kidding! The list of countries she’s visited blankets the globe – 26 countries on four continents, so far.

Raised in the tiny rural town of Clarence, New York with three siblings, Laura learned the rewards of service early on. Her parents took their family to Lancaster, Pennsylvania, to participate in a project sending thousands of backpacks and shoeboxes filled with school supplies, small toys and toiletries for children in Russia and the Ukraine. The gifts were donated by children and families across the country and shipped to a warehouse in Pennsylvania to be reorganized into equivalent packages and shipped on to their final destinations in the former Soviet Union. From that beginning a devoted global Samaritan was born answering the call of those in need in some of the most remote, primitive locations on the planet. The teenaged Laura dreamed of moving to the African bush to start an orphanage. Traveling to Africa a few years later taught her that while working with orphaned babies and children was what she was meant to do, bush living was not her cup of tea. Electricity and good coffee were scarce and deadly, venomous snakes and malaria mosquitos were not.

Laura once again answered the call in 2010 journeying to Port-au-Prince, Haiti, six months after the devastating earthquake. She assisted in medical clinics where she observed that sometimes the simplest supplies make the biggest difference. Clean drinking water and shelter from the burning sunshine in the manner of hats or sunglasses were items greatly needed and appreciated.

The year 2011 brought Laura to one of her greatest adventures yet. The “World Race” organization caught her fancy and she signed on to visit 11 countries in 11 months with the purpose of supporting a service project in each country. She painted houses in Puerto Rico, cradled orphaned babies in South Africa, dug drainage ditches in a Dominican Republic slum and taught English to Burmese refugees in Malaysia. 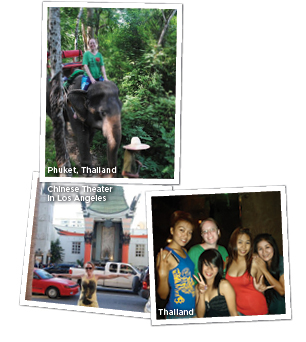 You’ll find Laura during her travels hanging out with the locals in “hole-in-the-wall” places. “That’s where you’ll hear their stories, learn their culture and get a taste of what their country and people are all about.” She loves to learn new skills and contribute her impressive existing skills to serve local needs.

The list of risks inherent in exotic foreign travel is long and serious. Laura survived a bout with malaria, fortunately the strain she contracted was less virulent and was eradicated with intensive treatment. Her friend was not so lucky, and the more virulent strain she contracted is still present—although dormant—in her blood and could return at any time. The owner’s wife at the orphanage where Laura was working was tragically not so lucky. She and her unborn baby perished, even though all three woman had the benefit of the same modern drug treatment in a quality hospital.

The indomitable Laura still seeks out opportunities for adrenaline-rush recreation. Cliff-jumping in Puerto Rico, zip-lining on three continents and an abbreviated foray into surfing. It was abbreviated due to a broken nose incurred during an awkward forward bail-out during her first lesson. “Who knew that you should always fall off of the back of a surfboard to avoid smashing your face into the rising nose of the board?” Laura said.

Laura’s mother and grandmother are both “over the moon” about the news that Laura will soon be settling down back amid family in upstate New York. Relieved that there will be no more frightening phone calls from Africa that start with, “I’m OK Mom, don’t worry but I’ve got malaria. It’s responding to the drugs and I’m going to be fine.” It’s no wonder they’re thrilled!