A Different Way of Life 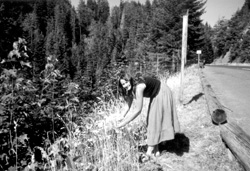 Kim is an ESL teacher at Hilton Head High School. Before coming to South Carolina, she traveled all over the country, living out of her pickup truck. When asked to tell of her experiences, she gets out her collection of road maps and pours over them in search of towns and places long-since visited.

Pink: When did you first start living out of your truck?
Kim: In 1989. I was living in California and working as a teacher, so I would move out of my apartment every year in May because I didn't want to pay rent during the summer. The first year I went up the coast of California, Oregon and Washington, then I cut across Idaho and Montana, did a lot of trekking around. There's a place in Utah called Canyonlands, and in the summer it has the most perfect climate, no bugs and you can stay up all night because the moon and the stars are so bright that the light reflects off all the rock formations.

Pink: What other spectacular places have you seen out West?
Kim: Along the Snake River in Idaho there's a place called Fruitland. They have great homegrown organic veggies there and a lot of fresh fish that people sold out of the back of their pickups. I always ate fresh food that I bought along the way.

I tried to go places the tourists did not, like the Frank Church Wilderness area. It's the largest wilderness area in the United States, by the Blackfoot Indian Reservation and the Bitterroot Range.

I did a lot of day hiking, and I had my bike with me. I camped every night and I usually stayed on BLM [Bureau of Land Management] primitive sites (no water, no toilet), and that was $3 per night. I always carried plastic jugs of water and filled them up when I was in town or at the Forest Service Station, and I observed all the backcountry rules of cleaning up after yourself. I never saw any pollution up there. Not a lot of women out there either, though.

Pink: Did you feel safe being a single woman?
Kim: I was totally alone, but I felt safe.

Pink: Do you think it would be like that now?
Kim: No, I don't. I think I was very fortunate to be able to travel like that without a dog, a gun, a cell phone, a credit card or even a whole lot of money.

Pink: How many years were you living in your truck?
Kim: I lived in California for 10 years, and I did that every summer. My dream was to find land that I could live on sustainably. I wanted to live without electricity. I always really felt that electricity had an effect on my nervous system; whenever I was in a place that had electricity, I felt elevated levels of anxiety. When camping, I felt calm, intuitive, free and in control of my destiny. My favorite place in the world is an area called the Boston Mountains in Arkansas. Going there is like going back 100 years. There are people who still don't have electricity, running water or phones, and they don't want it. They live totally self-sufficiently. They raise pigs, chickens, sheep, and goats, haul their own water, cut their own wood, hunt their own game, and grow their own vegetables. They don't read newspapers. Anything that's happening in the city is of no consequence to them.

I ended up buying property in Arkansas. I had goats, so milk was the staple of my diet. I made cheese, soap, yogurt. When I went into town, I'd buy beans and rice, but I tried to grow all my own vegetables. A lot of root crops like carrots, beets, potatoes and turnips, that's what I ate through the winter. I had a solar-powered radio, used a propane lamp at night. I hauled 33 gallons of water every day, except when the ice or snow was too thick to get down to the spring. Then I had to bring in snow and melt it in a pot. I lived that way for three years.

Pink: Why did you leave?
Kim: It's very hard to work the land; it takes a lot of physical energy. I wouldn't take back my experience of living there because it made me a really strong person. But I guess I decided that I didn't want to live alone in the woods and have to work that hard every day for the rest of my life. I had already experienced the dream of living off the grid, so I wanted to go in search of another dream.

Pink: What was that dream?
Kim: That's a good question. When I came here I had nothing. I was sleeping in the back of the truck with my dog at the marina in Beaufort or the Wal-Mart parking lot in Hardeeville; but total strangers helped me along the way. The people in this area have really big hearts, and they reach out to people who need help. Now, for the first time, I feel satisfied with where I live, my partner, my job, friends and family. so I've lost that wanderlust. I feel total contentment instead of being out there searching for something. I'm thankful every day for what I have.