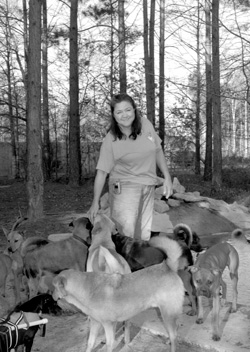 Karen Wilkins, founder of Maranatha Farm in Ridgeland, takes this verse from the Bible very seriously. That God should think to include all the creatures of earth in his sacred covenant is proof to her that animals are equally as important as humans in the eyes of the creator.

"There are an awful lot of creatures in the Bible," said Karen, "everything from bunny rabbits to dinosaurs. I haven't done a word count, but there may be more references to animals than man. So the Lord really does care for the creatures."

Karen grew up on a hog farm in Kansas where she learned to take care of animals from a young age. A number of years ago, she got involved with several animal rescue organizations around Jasper County. But she eventually became frustrated with their geographical limitations when it came to which animals they could take in. So in October, 2006, she started Maranatha Farm with a mission to "serve God by going to the aid of animals which are hurt, abused or abandoned, taking them in and making them into healthy companions for people to adopt and enjoy." Karen finds abandoned and mistreated animals in her area, or they are brought to her by people from as far away as Florida, Georgia and North Carolina. Many of them are sick, starving or bear the wounds of torture and abuse, such as Sammy, a boxer who had half of his head kicked in, and Blossom, a puppy whose nasal cavity was destroyed by a screwdriver shoved up her nose.

"The devil does walk in the world," said Karen, when asked how people could be so cruel. "But the Lord uses the devil to his own advantage sometimes. Now Blossom can breathe again, and because of her we learned how to write grants, otherwise we wouldn't have had the money to pay for her surgery."

Between 30-50 dogs-plus the occasional cat, hamster or rabbit-reside at Maranatha Farm, which recently doubled in size when Karen married her next door neighbor. They have achieved their status as a 501-C3 non-profit, are assisted by approximately 25 volunteers, and strive to work closely and cooperatively with other animal rescue groups in the region. The dogs at Maranatha get to run around the 10-acre property all day while Karen does everything she can to make sure they stay healthy and happy.

"We live in a double-wide that used to be a beautiful home," said Karen. "But now it's basically become a big dog house, because at night, we bring them all in to sleep on blankets on the floor."

Karen focuses her resources primarily on sick or injured animals, with the goal of rehabilitating them so that they can be adopted by a new, adoring human. When confronted with a dog in distress, she is willing to go to any length.

"At one time in my life, I was quite wealthy," she said. "I spent it all on the dogs. It starts out as an awareness, then it becomes a compulsion and then an obsession. It's something that gets inside your heart and, for me, this is more gratifying than anything else I've ever done."

Maranatha defined: old Aramaic phrase that means Our Lord cometh. Number of dogs they have taken in so far: 240 Number of dogs they have adopted back out: 198 How much dog food they go through in a month: 2,000 lb. How you can get involved: visit their website at www.maranathafarm.org, or visit the farm during their monthly cookout, every first Saturday from 11-4, although Karen warns, "People may be adopted by an animal. It has happened."