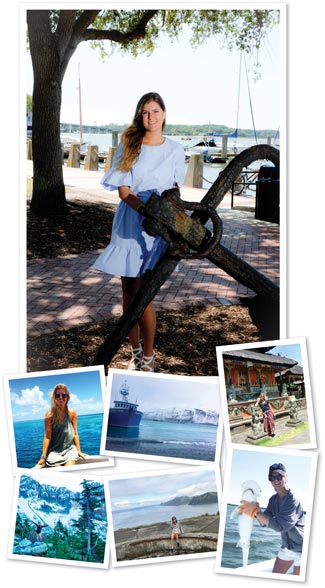 Jessica Foley is every bit the professional realtor. She arrived for our appointment early, stylish and poised, carrying a fabulous big purse, which held, what I can only surmise, things to ready her for any situation.

A relative newcomer to the area, Jessica has dove in head first, both professionally and personally. She is an agent with the prestigious Berkshire Hathaway HomeServices Bay Street Realty Group. She is also a member of the Junior Service League of Beaufort and a volunteer with the Beaufort Water Festival, Child Abuse Prevention Association (CAPA) and Pritchard’s Island Sea Turtle Project. It is this last organization that gives us a hint into her past.

Jessica is from Dennis, Massachusetts, and spent lots of time on Cape Cod during her youth. As a little girl her family dubbed her “The Fish” because she never wanted to get out of the water. She loved everything about the ocean and its creatures. Ironically, her father would take her two brothers deep sea fishing, but she was always left ashore.

When Jessica was 18 year old, she and her mother took a spring break trip to Charleston, SC. This is exactly when she fell in love with the College of Charleston’s campus. Soon after she applied, enrolled and reeled in a degree in Marine Biology. During her junior year in college she spent a semester in Australia, studying various ocean creatures via scuba diving around the famous Great Barrier Reef. She lived on a boat for a while and travelled around with new friends in their van, all while exploring Australia’s huge coastline for her studies at James Cook University in Queensland, one of the world’s top Marine Biology schools and leader in teaching and research that addresses the critical challenges facing the Tropics.

She admits it was so beautiful there, she didn’t want to leave, but says she owed it to herself, as well as her parents, to come back and finish her degree at the College of Charleston. She was shocked to see her father’s hair had turned from black to gray while she was gone. “See what you did to me!” he said, only half joking.

In her last academic year, she met Beaufort native Nathan Akers, and they started dating. But Jessica had more plans for adventure, and her first job after college was with National Oceanic and Atmospheric Administration (NOAA). She was sent to Bald Eagle, Alaska, which coincidentally records show more bald eagles than people! She worked on fishing boats as the lead scientist—and only female—on the midnight to noon shift, measuring, weighing and documenting each catch a group of burly fishermen were hauling in.

Ever see “Deadliest Catch” on the Discovery Channel? That was the crowd Jessica was working with, through dark nights and extremely cold weather. Imagine doing your job on a fishing vessel bouncing up and down 40-foot waves. Jessica never got seasick. After a night’s shift, she would sometimes go with the rough and tumble crew to the famous Norwegian Rat Saloon—the only bar in Bald Eagle.

And what did her new boyfriend Nathan think about this job? He was very proud of her through her entire two-year stint. That’s when she was sure he was the man for her. He was busy himself with law school. Her schedule was to work four months on, one month off, four months on, etc. On her time off, she would fly to spend time with Nathan, so their relationship flourished in spite of the huge distance.

After Nathan’s law school graduation, he returned to Beaufort to work with Howell, Gibson & Hughes Law Firm and proposed to Jessica. Of course she said yes! Since landing in Beaufort, which is now home, she recently became a SC licensed realtor. The couple had to cancel their engagement party due to the virus quarantine, but are looking forward to their wedding in 2021 and the many celebrations that will surround it.

Jessica is an adventurous dynamo teeming with drive and ambition. Her expeditions in Australia and Alaska are just the beginning. She and Nathan plan on traveling together a lot to see the rest of the world, but for right now, they are lapping up life in the Lowcountry.

Jessica’s tips for being adventurous:
>  Jump in without lots of thinking about it!
>  Don’t be afraid!
>  Be adaptable to new situations!
>  Make memories! They are the most precious things you can own.