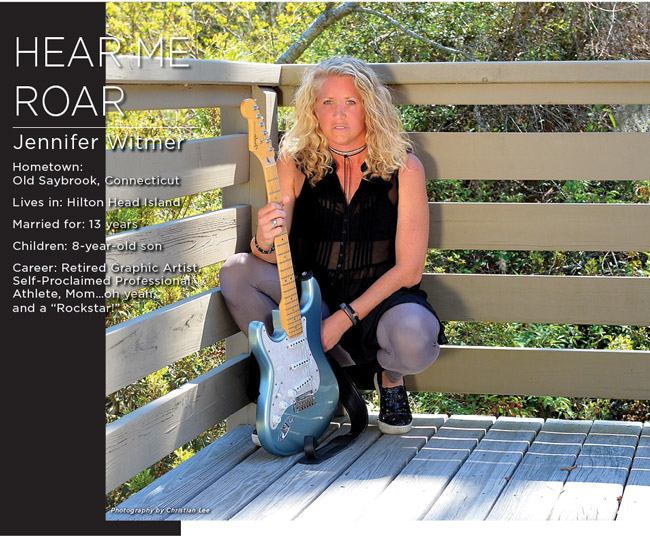 I love being a part of: the band The Chiggers; it’s a way to be creative. Music is a form of art, and performing is something I really enjoy. I love my band mates Roger, Pete and Krash—they’re an extension of my family. We laugh and argue, all the while appreciating each other’s talents. It’s a great mix of personalities, and we each have a specific role within the group. It’s not Jennifer and the band…we are The Chiggers. I couldn’t be successful without those three stooges.

Lead singer and only female in the band, what’s that like? Feels like it did when I grew up…youngest and the only girl. I have two brothers and three cousins. Holidays were a blast, but I had to be one of the guys if I wanted to be included. No Barbie dolls or My Little Ponies for this chick; it was video games, billiards and unmonitored Jarts tournaments—nothing like having your 17-year-old cousin hurl metal javelins at you from 40-feet away when you’re at the ripe age of 5.

Seven words on being a rockstar: Don’t take yourself so seriously; stay humble.

The most memorable gig: November 27, 2013—Thanksgiving eve and my entire family (24 in total) was visiting from out of town for the holiday. We played the courtyard at Street Meet on Hilton Head that night, and it was about 40 degrees. I pulled my brother up to sing a duet with me. I’ll never forget the look on his kids’ preteen faces—pure shock! Little did they know he has always dreamed of being a rockstar.

My absolute favorite song to rock out to is: This changes on a daily basis, but let’s go with Come To My Window by Melissa Etheridge.

The hardest thing I’ve ever done is: Well, it’s not done…raise a kid. My hope is that he’ll continue to be an independent, smart, caring person.

I could never live without: Cheese…kind of a no-brainer. It’s on pizza, burgers and nachos; plus, it pairs well with wine and beer.

I’ve always wondered…In 2062 will we really be living like the Jetsons?

My favorite badass role model is: Bonnie Raitt. She excelled in the predominately male world of Blues, and she plays the slide like no other.

Three of my personality traits I’m proud of are: Honesty, humor, and being able to keep a secret.
My last Ah Ha moment taught me: You cannot control other people’s actions, but you can control your reaction. This is a work in progress; I think my husband can attest to that best. I am, however, still in my 30s, (well, at least until August) so I have time to master my new revelation.

I’m currently roaring about: I’m no activist, but for goodness sake, people, please stop littering! Yes, I am that crazy person getting out of my car at a red light to hand someone’s trash back to them after I watched them throw it out of their window. Yes, I am that mom who took their kid to Chaplin Park on a Saturday morning to pick up garbage as a disciplinary action. Yes, I am that person who picks up receipts in front of the grocery store less than five feet away from the bin. It’s not that big of a request, is it?