Girl Ballers—Reaching 1000-Points and Beyond 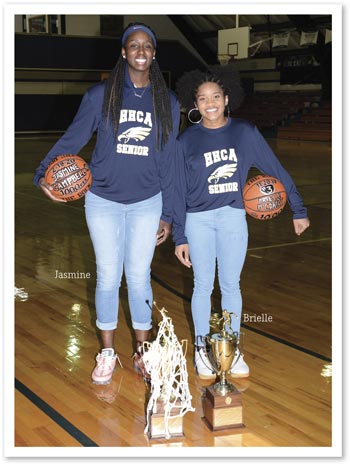 When the girls from Hilton Head Christian Academy step on the basketball court, opponents better stand up straight. As state champions, the Lady Eagles came to play.

“We may laugh and have fun in the locker room but once we get on the floor it’s all business,” said Brielle McCarthy, starting point guard who commutes to Hilton Head Christian each day from Pooler. “We have a goal, and that is to win the state championship.”

She and forward-center Jasmine Campbell both recently hit the 1000-point mark over their high school careers, an enormous achievement, which in their words, “isn’t something you can just go out and do.” It took a lot of hard work, dedication, team effort, and the initiative to get themselves open and take shots. As seniors carrying their team into the post-season, you would think they’d be feeling the pressure—but both girls are remarkably grounded.

“We’re a very confident team,” says Jasmine, a Hilton Head native. “Not as in cockiness, but just knowing that if we all play our game, we’re a hard team to stop. We go into it with that mindset even if we have some nerves.”

Despite how much they enjoy and excel at basketball, both girls are currently deciding whether they will continue playing in college. Although they’ve been extended the opportunity—Brielle for Erskine College and Jasmine for Claflin University—they don’t take the commitment lightly, as it means four more years of practicing like it’s their job. On the other hand, they could choose to have a true college experience and see what life is like without basketball. Either way, they both plan to stay in the sports world—Jasmine as a physical therapist, Brielle as a sports broadcaster—and a big part of their motivation is to inspire younger girls.

“You’re not going to see too many girls in a gym full of guys playing basketball,” says Brielle, who often joined her dad and his friends on the court. “It kind of makes you want to change that. And it definitely makes you stronger.”

“It comes to the point where you have to play with guys because they’re the only ones left who want to go up against you,” agrees Jasmine, who grew up shooting hoops with her brothers in their grandmother’s driveway. “Women are on the up-rise in the sports world but males still dominate, so we want to promote women’s basketball.”

It hasn’t all come easy. Both girls tore their ACL (a ligament in the knee), which meant a slow and painful recovery process both physically and in terms of regaining their self-confidence. It was an experience that taught them patience, because things don’t always come when you want them.
“Everything happens for a reason,” says Jasmine. “If you’re not starting, if you’re not averaging the points you wanted, if you’re coming back from an injury, it makes you work harder. Just don’t give up—that’s with anything in life.”

“Your work ethic determines most things,” adds Brielle. “My main message for younger girls is take on as many challenges as you can and strive to be the best you can. There’s going to be frustration and road blocks but those are just obstacles to the joy that is to come. Also understand that every situation is not for you. God has a plan and you are on His path. So love what you do because if you don’t, what are you doing it for?”

Up Close:
Team jam: “Lottery” (Renegade) by K. Camp—a popular song on Tiktok (which is an inside joke because it reminds them of a boy they all liked from Beaufort Academy)

Gameday superstition: They can’t eat Chick-fil-A because they had that before losing in the playoffs their 10th grade year, but they had subs before winning the state championship last season, so they’ve been getting Jersey Mike’s before every game

Values they share: Faith, family, patience and gratitude for growing up in the Lowcountry