Dropping Some “Sistory” On You 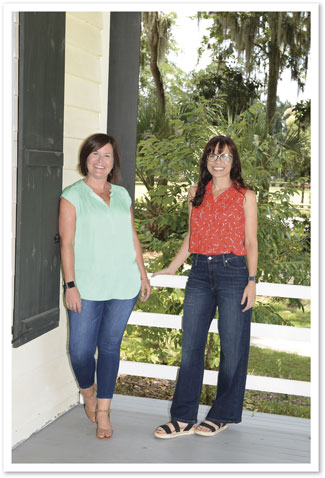 It came as a surprise later in life when Erin Reichert and Sarah Clemmons discovered that not everyone spent their formative years visiting random monuments across America. But the family’s extensive travels to national parks and historic sites gave these sisters a lasting love of history—or “sistory,” as they dubbed it after an hour-long jam session that revealed their fact-wielding nerd-prowess.

“You know you’re pretty deep into history when your vacations are to the Herbert Hoover Presidential Library,” quipped Sarah, who confessed to liking presidents “with a little bit of tarnish on them,” particularly Lyndon B. Johnson.

Erin went on to become a high school history teacher, first in their native Illinois for 7 years, then in Bluffton for another 14 years running. “My students make fun of me because I tell a lot of Teddy Roosevelt stories,” she cheerfully admitted. “We listen to songs from Hamilton. I love the Gilded Age (1870s-1900), so I actually relinquish that unit to my students because I would spend too long on it.”

Erin’s passion has led her to develop some rather progressive programs, such as the American history and literature class she co-taught that highlighted alternate narratives. The kids who took it are in their now 20s, and when Erin sees them in the community, they often tell her how much the class impacted them. She once attended a conference in Washington D.C. on “unsung heroes”; presenters were lauding a man who befriended black students during integration at Little Rock High School, and when they announced that he lived in Bluffton, SC, Erin was ecstatic. She later invited him to one of her classes.

“I want to convey to my students that these were real people,” she said. “They lived in a different time but they faced decisions just like we would today. It’s all about creating empathy and putting yourself in their shoes—what would you have done? Would you have had the courage to sit down by that black student?”

Sarah’s abiding love of history draws her into books and podcasts galore, which she sees as giving important context to current events. As a child she devoured the Scholastic Encyclopedia of Women in the United States, and still harbors deep admiration for ladies like Jeanette Rankin (the first woman to hold U.S. federal office) and Shirley Chisolm (a black female presidential candidate in 1972 who got as far as the debate stage.) A natural-born feminist, Sarah was first learning to read when she made out the sign for Mansfield, Illinois, and indignantly asked her parents why it wasn’t Womansfield.

“When I was a kid I told everyone that I was going to be the first woman president,” she said. “It’s crazy that as a 33-year-old I could still be the first woman president! I think women internalize messages from men in power, whether in their public or private lives, about who they are and what they should do. We need more classes like my sister’s that show girls they can do anything they set their minds to. We need to continue making strides because we are nowhere near a position of being equal.”

Erin concurred. “How has there not been a woman president in our country?” she chimed in rhetorically. “We’re so behind. I show my students other countries that are considered less progressive or democratic, and how they have women leaders—like Rwanda has the highest number of females in elected office—and they’re like, “what!”

I want to make sure these girls know that moving forward they can do anything.”

Current favorite history facts:
Sarah: the dishwasher was popularized at the 1893 World Fair by a rich woman tired of servants chipping her fine china
Erin: John Tyler, who was president in the 1840s, has a living grandson—just think about that for a second.

True confessions:
Erin: “Sometimes I’m embarrassed to share facts because there’s no reason I should know them.”
Sarah: “I don’t care if people judge me for being a nerd; I more care if they tune me out.”