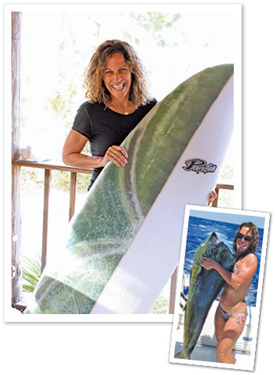 A decade ago Elizabeth "Liz" Waldorf and her husband, Casey, purchased 10 acres of land out on Lady’s Island. “He asked me, ‘Do you want a boat or a house?’ ‘Boat,’” I said.  Their housing is modest, juxtaposed against the alluring landscape of the Lowcountry, a choice, a picture of freedom. “We have bonfires and oyster roasts. The kids run around and play flashlight tag. We just have fun.”

“Life is about experiences, not stuff.” Liz and I sat out on the porch of her lofted guesthouse adjacent to the 40-foot tall barn that houses the Blue Hook, a 23-foot fishing boat she and Casey take out to the Gulf Stream, some 70 miles offshore. They leave at three in the morning, arriving around six to begin fishing for wahoo or mahi. Her excitement is contagious as she relives her record-breaking catch. “I hooked up with a fish, and it was huge. We could see it jumping and twisting in the air.” She explains to me that if anyone else touches your pole, “then it’s no longer your fish if you needed help reeling it in.” In his excitement, Casey kept trying to help, and she’d tell him, “Just drive the boat.” After 30 minutes, with her back aching and arms burning, she reeled in a 47-pound, five-foot mahi mahi, her pride and joy. She takes her catches down to the marina in Port Royal to check them in. “I have the record black sea bass, and for the women angler, I have the record mahi. I would’ve had the record but ol’ Frank Gibson beat me,” she smiles from the inside out.

For 10 years they’ve been dreaming of buying a sailboat and leaving on a great adventure. “Then, along came Saylor. That’s why we named her that, to keep the dream live.” Last November the couple finally purchased their 38-foot dream sailboat, which they named Soulshine.  Liz recently resigned from her teaching career to begin preparing to set sail sometime early November. They plan to travel to Costa Rica, Panama, Dominica and the Bahamas. “We’ll just anchor off at different spots and spearfish and live off the land and the water.”

Fishing is far from Liz’s only outdoor sport. She grew up racing motocross and playing soccer and softball.  A few years ago she took her son snowboarding in Steamboat Springs, Colorado. “They get the best snow—champagne snow.” She taught her husband how to bow hunt and ride dirt bikes, and he taught her to surf. Casey loves big waves, and they head out to Hunting Island anytime there’s a hurricane coming. They’ve also surfed the waves of the Outer Banks, Costa Rica and the Virgin Islands.

I asked Liz if she was scared of sharks or big waves. “What’s gonna happen? They might bite my leg off, but you know what? That’s the path you go. So then you just live with one leg.” She tells me about the giant waves. “I took a tumble on one in the Outer Banks. My board popped up and the fin cut my head open. A little Crazy Glue and some stitches, and I was fine.” A self-professed adrenaline junkie, she says, “It’s an internal rush, and I need it, but I’m getting better and calming down a bit.”
She trained for a month, lifting weights and running, before they left for Tortola, Virgin Islands. “The waves were enormous, terrifying, and they just kept getting bigger. By the end of the day the number of surfers left had dropped from 35 to eight, including Casey.” Even Liz didn’t drop in on the big ones. She paddled out, duck diving under the break, catching a few waves that were breaking off and peeling down a little bit.

But her best story of all, the subject of a novel Liz is currently working on, is based on the true and horrifying events that occurred three years ago, the last time the family was in Costa Rica. “When we travel to other countries, we don’t make reservations. We fly in, rent a car and travel wherever and stay wherever we can.” While making their way down rough roads and across rivers, through 60,000 acres of jungle, they encountered an ex-pat from Vermont who offered them a free place to stay with their own private beach. “You’d be doing me a favor. No one is there,” he said.

The scene straight out of a horror film, their host slid his machete between the door and the frame, popping the door open and welcoming them inside. He instructed them to put their bags in the back bedroom. With the tides still rising and the sun setting, Casey ventured outside and overheard the man on the phone. “I have a family. It’s a husband and wife. They have a good size son and a pretty little girl.” At the same time, inside the house, Liz discovered a large, well-worn book entitled Internal Medicine of Large Animals. “Wyatt, our son, was so innocent. He came out of this room and was so excited. ‘Mom, that room is full of backpacks!’ I just felt sick.”

I’ll have to leave the story there, as not to give too much away, but in a couple years, be looking for a best seller to hit the stands. Undaunted, Liz plans to return to Costa Rica, which isone of her favorite surfing spots, only this time, they’ll rest easy on their boat, Soulshine.

Son: Wyatt—Star running back at Beaufort High, blew his ACL in the first playoff game and still ran an 87 yard return for a touchdown.

Daughter: Saylor-Rae—Golf prodigy who makes up and sings the most amazing songs.