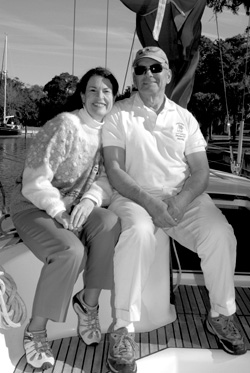 Elizabeth Loda sits at her desk in an office just outside Bluffton. She pulls out a box containing a worn logbook stuffed with faded, yellowing cards-pilot's license, radio telephone operator's permit and various medical certifications-relics from the days when she, her husband and their two daughters would board a small plane and Elizabeth would fly them from upstate New York to Nantucket, Florida or the Bahamas on a weekend getaway.

To look at Elizabeth now, in her conservative office attire, you might never suspect she has weathered hurricanes at sea or discovered ancient ruins in Turkey. But the tweed suit and wire-rimmed glasses conceal an adventurous spirit that will never quite be tamed.

"I got my pilot's license at 24," she says. "Women didn't do that back then."
It started the day a postcard appeared in their mailbox-probably addressed to her husband-inviting the recipient to "come take a $5 flight." Elizabeth had always wanted to fly, so she went, and soon she was taking lessons to become a pilot. Flying was only the beginning of her career as a world traveler, however, because eventually she and her family would trade the wings for sails and head for the high seas.
"We moved to Long Island and everyone there was sailing," she recalls. "So we bought a sailboat, and when we went down to North Carolina to pick it up we took some gear with us. Then we decided to learn by just sailing back up."

Though they knew nothing about sailing, Elizabeth had plenty of knowledge about weather and navigation. Her husband was familiar with car engines, so between the two of them they figured, how hard could it be? They made plenty of mistakes on that trip, but by the time they reached New York Harbor, they basically knew what they were doing.
Soon the whole family was sailing up and down the East Coast to Bermuda and the Bahamas. Then, in 1992, they completed a trans-Atlantic voyage and went to Spain in honor of the quincentennial anniversary of Columbus' discovery of America. Elizabeth has vivid memories of visiting cathedrals where Columbus worshipped and going to the well where he filled his water kegs for the voyage. But she remembers with equal fondness rescuing a sea turtle off the coast of Africa; the poor creature was hopelessly entwined in a piece of net that was lashing it to a radio buoy.

The next logical step was to sail around the world, and in 1999, the Loda family did just that. They started in New York, passed through Hilton Head, the Caribbean and the Panama Canal, then sailed across the Pacific, making port in a total of 33 different countries. Seven months later, they were in New Zealand where they docked the boat and headed home to work for a while.

"I never realized how big the planet was until I started going around it at seven miles-per-hour," said Elizabeth. "We did that for five years-work for half the year then get back to the boat and just keep heading west."
Now the boat is docked at Windmill Harbor and Elizabeth is concentrating on her work as director of financial planning at the Bedminster Group. She finds that the wisdom she gained in her travels has a direct influence on her approach to investing.

"I have always been adventurous," she said. "I like the excitement, and I think other women would like it too. But like anything, including financial planning, you need to be prepared. Start small to build up your experience. It's fun to take risks, but take risks that you are prepared for so that you live to take another risk."

Hometown: Port Washington, NY Mother of: Katherine and Christianne, who has cerebral palsy and has gone on every single flight and every single sailing trip, even though she can't swim Name of their boat: Christianne Favorite Island: Tonga Next trip: hopes to return to Turkey