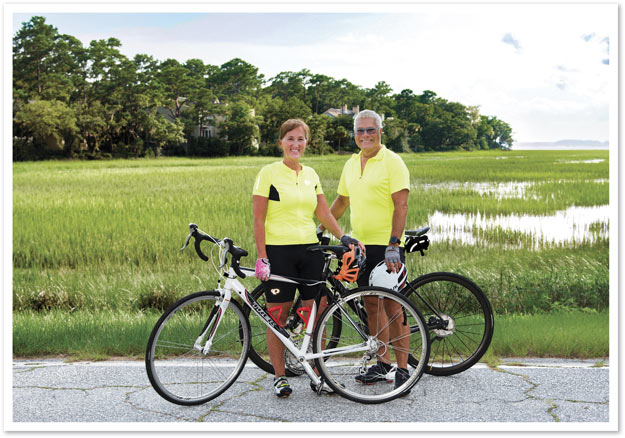 When Rhonda Wallace enrolled in medical school seven years ago, she joined the ranks of some 20,000 students aspiring to become doctors. At the time, men outnumbered women in U.S. medical schools by nearly 10 percent.

But it wasn’t her gender that made Rhonda stand out among her peers —it was her age.
At 47, the mother of two teenage girls was nearly twice as old as the average first-year med student. Just one-tenth of one percent of students are in their late 40s when they begin the arduous seven-year process to become a doctor.

In July at the age of 54, Rhonda took her medical licensing exam and became board-certified in family medicine. Shortly after completing her residency, she joined the staff at Beaufort Memorial Bluffton Primary Care in Westbury Park. This fall, the practice will move to the hospital’s new Okatie Medical Pavilion, a three-story complex offering primary care, urgent care and a number of medical specialties, as well as a breast health center, outpatient rehabilitation, and laboratory and imaging services.
“I love my job,” Rhonda said. “I accomplished my dream to become a doctor, and I couldn’t be happier.”

It was a journey years in the making with side trips to nursing school and physician assistant studies along the way.

At the age most undergrads enter med school, Rhonda was a single mother raising two young daughters. Married at the age of 20, she found herself struggling to get by without a college degree.
Determined to do better for herself and her daughters, she enrolled in nursing school at the University of Wyoming in her late 20s. Living in married housing, she enjoyed the camaraderie and support of other single mothers and young married couples.

Between her junior and senior year, she applied for an internship program in the cardiology intensive care unit at the Mayo Clinic in Rochester, Minnesota, and was one of 100 nursing students chosen from 3,000 applicants. During the summer program, her kids stayed with her parents on the North Dakota farm where she grew up.

Rhonda graduated in 1999 with a B.S. in Nursing and moved her family to Bismarck, North Dakota, where her sister lived at the time, to take a job as a cardiac inpatient nurse at St. Alexius Medical Center. The extra training she received to care for patients recovering from heart surgery motivated her to consider medical school.

“I knew I wanted to do more and thought I would love to be a doctor,” Rhonda said. “But at the time, my kids were involved in a lot of school activities—soccer, swimming, band—and going to med school would have required us to move.”

Instead, she enrolled in the Masters of Physician Assistant Studies at University of North Dakota, which allowed her to complete her first two semesters online. At the same time, she was still working at St. Alexius and managing her girls’ busy extra-curricular schedule.

“When her oldest daughter got her driver’s license, “I was like ‘Praise Jesus,” Rhonda quipped. “She could get herself and her sister to their activities.”

The second year of her PA studies would require her to relocate to Grand Forks, North Dakota. To manage the move without disrupting the lives of her daughters, her then-boyfriend, now husband, Bob Christensen, moved into her home with his daughter.

“He was taking care of the three girls,” she said. “My sister helped a lot, too.”

Upon graduating, she returned to Bismarck and worked as a PA surgical assistant for two years. When a colleague from the University of North Dakota recruited her for a position in the Emergency Department of Mayo Clinic Health Systems in Waseca, Minnesota, she didn’t hesitate to accept the offer.

“While I enjoyed surgery, working in the ER allowed me more autonomy and compensation,” she said, “I had two kids in college.”

Five years into the job, she decided to pursue a career as a physician, inspired by a fellow PA who had left to go to medical school.

“I was old enough to be his mother, but when he went off to med school, I realized I could do it too,” Rhonda said. “I was on the dean’s list in nursing school and had a 4.0 in the PA program. I knew I could do the work.”

The day after her youngest daughter graduated from college, she left for Saint James School of Medicine in Anguilla, a British Overseas Territory in the Eastern Caribbean.
“I raised my kids, they had their education and now it was my turn.”

She spent 18 months in Anguilla before returning to the states to complete her clinical rotations in Virginia. Then it was three more years in residency at the McLeod Regional Residency Program Medical Center in Florence, South Carolina.

This June, she moved to Hogg Island, located between Bluffton and Hilton Head Island, to start her new job with Beaufort Memorial Hospital.

“There were times I thought, ‘What am I doing?’” Rhonda said. “When I look back, it was definitely worth the sacrifice. I imagined what my life could be, and I made it happen.”