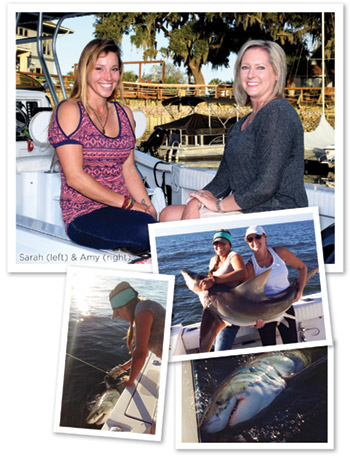 The women instantly formed a bond during a fishing outing when they discovered each has symbolic tattoos. Amy Prater was the first to notice Sarah Molesky’s jagged black ribbon with the word “Kihelakayo” tattooed on her inner forearm.

“I was like. . . “Oh, OK,’ ” said Amy, thinking that Sarah must be a cancer survivor. Sarah explained the meaning of the word is “keep going” in Lakato/Sioux. It’s something she has done every day since being diagnosed with Hodgkin’s lymphoma about seven years ago. She was 23 at the time, living alone in northeast Ohio.

The attention turned to Amy’s tattoo of a pink ribbon, the international symbol of breast cancer awareness. The design of a key is drawn on the ribbon, also symbolic because it is Amy’s maiden name. The tattoo is on the right side of her chest, significant because it’s on the spot where a port was inserted during her four months of chemotherapy after being diagnosed with an aggressive form of breast cancer more than six years ago.  A second tattoo of a bow is displayed on her back, which is the area where tissue was removed and used for reconstructive purposes.  Amy was 41 at the time, a new Hilton Head resident, and was given the grim news one month after getting married.

The conversation continued with few pauses, shifting to the topic of Africa. Both had traveled to Tanzania and parts nearby during the same time last summer and both fell in love with the beauty of the country’s wilderness.

Amy and Sarah, neighbors at a villa complex on Hilton Head, formed a fast friendship that day. Oh, they had chatted in the parking lot from time to time and always had good intentions of going fishing together.

Sarah’s boyfriend is Chip Michalove, owner of Outback Sports Fishing. Amy and her husband, Michael Prater, have known Chip for years and are also avid fishermen, taking out their 21-foot flats boat as often as possible.

But life always got in the way of a group outing, until Dec. 11, 2015, when the four boarded Chip’s 28-foot Glacier Bay Catamaran to go fishing about three miles out on Port Royal Sound (Sorry fisherman, the exact location is confidential.) The outing was successful from the get-go, reeling in a couple of redfish and two sandbar sharks, which are common in these waters.

Several hours later, when the men were at the front of the boat, and the women were in the back, comparing cancer survivor stories (and tattoos), and African wildlife experiences, the fishing rod, resting in a rod holster, went off. “Chip grabbed it and set the hook and handed it off to me,” Sarah said.

Chip, an authority on shark fishing, immediately knew is was a great white shark, the sexy species made famous more than 30 years ago in the movie Jaws, which still makes people’s imagination go wild when swimming and playing in the ocean. Amy was next to battle the fish, which turned out to be a female juvenile great white (about 2 years old), about 7-feet long and 350 to 400 pounds. “I’ve reeled in some big fish before, but this one I had to put the belt (fisherman’s harness) on,” Amy recalled. “My husband was holding the back of it because (the shark) was pulling me to the front of the boat.”

Amy and Sarah worked at bringing the fish to the boat’s side, switching off for about one hour. “I had 23 lymph nodes removed, so I have no upper body strength,” Amy said. Sarah is stronger than me, and I told her, ‘You’re going to have to get down here.’ And she got the fish to the boat.”
Before releasing the shark, Chip tagged her for the purpose of research. The group had fun petting the giant and took a zillion photos with their smartphones.

“They wanted us to do it,” Amy said, when asked why the men didn’t take over. “It makes them proud to see their wife, girlfriend reel in a big fish like that. When I tell people I caught a great white shark, they just freak out.” Although the research is vague, Sarah said it is believed the last time women reeled in a great white was more than 30 years ago.

Amy and Sarah haven’t been fishing together since, but when they see each other, their connection has another layer to it. “It’s like the military; they always talk about brothers bonding. We have a sisterhood,” Sarah said.

Both women are cancer-free, but by no surprise, they look at life differently. Sarah, an expert equestrian, limits all processed food in her diet and sticks to the low-carbohydrate, high-fat food Banting diet. Amy does not drink alcohol because her form of cancer was estrogen positive and alcohol raises estrogen. She also frequently attends a support-group meeting in Bluffton.

“You have no idea what you’re are fighting,” Sarah said about her battle back to becoming healthy. “All you know is that it’s trying to pull you in. You know it can kill you, and then all of the sudden when it surfaces, it’s, ‘Oh my God,’ it’s the biggest weight in the world released.”
Kind of like fighting a shark.

Up Close:
National News: Chip Michelove, made national news on March 8, 2016, when he hooked a 2,500-pound great white shark in Port Royal Sound. A client from Tennessee and John Brackett, who is another Hilton Head charter captain, helped during the four-hour battle.
This time, Chip’s girlfriend Sarah and neighbor Amy Prater were not on board to contribute their strength in the historic catch.