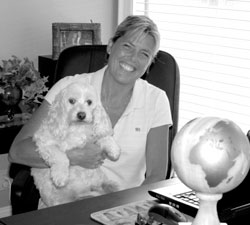 Twenty-two years ago, when Cindi Reiman moved to Hilton Head Island to teach tennis at Sea Pines Resort, she was well on the way to her life's goal. Quickly snapped up to head the tennis program at Long Cove, thrilled to be living in paradise and doing what she loved, she said, "I thought I would be a tennis director my whole life. That was my goal."
But something much bigger was brewing as Cindi's natural energy and enthusiasm led her down a career path that has not only broadened her horizons, but set her on an amazing journey beyond anything she ever dreamed of achieving.

Today, Cindi is founder and president of the American Hospitality Academy, one of the world's most prestigious providers of structured training and exchange program opportunities in the hospitality industry. She is currently building a network of international hotel management schools throughout the world-the next to be right here on Hilton Head Island. She has also developed a much-needed non-profit educational program for children to promote cultural understanding. Meet this amazing woman and follow her path to a better world.

Laying a foundation
As Cindi's teaching career progressed, her passion for tennis was only surpassed by her compassion for people. Teaching others to enjoy the sport that she loved became her daily mission. As director of tennis at Long Cove, she soon branched out and started her own tennis program on the side (a local group for little girls) at Hilton Head Resort. Seeing her abilities, when the management approached her to provide additional resort activities, the first brick was laid toward a foundation for the future. With an educational background in business and an "anything is possible" attitude, she grabbed the opportunity to grow.

"That was sort of the beginning," said Cindi, who initially named the business "Resort Recreation and Tennis Management." Contacting Clemson University about the possibility of procuring interns to help staff her programs, she and a business partner went on to run recreation programs at the Island Club and the Marriott Monarch Resort.
As word of her business spread, larger hotels began asking Cindi to provide front office and food service interns. "That opened up a lot more opportunities," she said. Changing the name to "Resort Recreation and Tourism Management," she approached more schools for interns, emphasizing the educational advantages of her program.

"This is where our niche came in," she said. "We're not a hotel, and we're not a school. We're a bridge," she explained. "What set us apart was that we always had some kind of educational component. That's what we would market to the schools: Not only are the students going to work, they are going to get professional development."

Over the next four to five years, she was able to bring in more and more interns. But the door to the world opened when she became a J-1 Visa sponsor in 1986. "That's when we switched from being mostly domestic to being international," said Cindi, once again renaming her business to reflect the scope of services. Known since as the American Hospitality Academy (AHA), the company provides the most comprehensive internship program in the world.

"The difference in our internship and others in the United States is that ours is very structured," said Cindi, explaining that both training competencies and community service are required. Further enhancing the educational element, AHA created the first global internship manual, called Servlead: Service Leadership in a Multi-Cultural Workplace, printed by AH&LA (American Hotel and Lodging Association) and sold in bookstores around the country.

But according to Cindi, it's the personal connections that have put the company on the map. "One of the biggest success factors in leadership is the relationships you build, especially global relationships. People have to trust you. Universities around the world trust AHA," said Cindi. "They see the difference in an AHA internship."