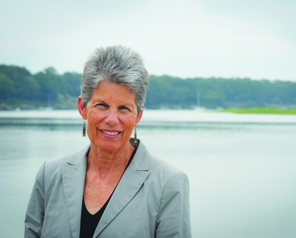 Here's a simple equation that doesn't require math skills: Intelligent + confident + physically fit = Chris Cassidy. Sure, the Hilton Head Island certified public accountant can crunch numbers with the best of the bean counters, but there's so much more to her than a calculator and computer software programs. Her formula is simple: Athletics + accounting makes for a balanced life.

Several times a week, Chris spends lunch at the Island Recreation Center, swimming laps and going through her self-designed drills. If not at the pool, she's at a yoga class, often driving to Savannah for Bikram (or hot) yoga.

"I just now am starting to ride a bike, much to the disapproval of a physician who said if I fall, I could crack the thing in my hip," said Chris, who underwent hip replacement surgery two years ago. Suggestions from medical professionals have never stopped this 64-year-old, 115-pound dynamo from keeping active. And there have been a lot of conversations with doctors throughout her lifetime.

Born and raised in San Francisco, Chris was diagnosed with paralytic polio in 1952 when she was four-years-old. Chris still recounts the stigma attached to living with a highly contagious disease that attacked her right leg. "I lived on a Catholic block where the kids all played together . . . all 50 kids in the neighborhood had to be quarantined," Chris said. "When my mother would go to the store, where everybody knew everybody, the store would clear out. She was told, 'You can't come back. Don't shop here.' "

Polio forced Chris to live in a hospital for two years with other children who had polio. She had seven surgeries by the age of nine, and walked with a brace or on crutches until second grade. It was the determination of her late mother, Agnes Cassidy, who gave her only child the chance to have a quality childhood. And it started with physical activity, swimming in particular.

Chris' early recollections were daily visits to the Sutro Baths, a historic swimming pool complex on the Pacific Ocean. When lessons were no longer offered there, Chris' days would begin at 6 a.m., when her mother would drive 45 minutes to a pool in downtown San Francisco.

The theme of water has followed Chris throughout her life. After starting out as a lawyer, she earned her Master's degree in law and tax at New York University. But in 1990, she decided to give up her job at an international accounting firm in New York City and buy a sailboat. The vessel became her home and her personal cruise line, primarily up and down the East coast.

She landed on Hilton Head Island in 1996, when she and a sailing mate got caught in Hurricane Fran. The storm was so terrifying that Chris stopped sailing and lived on her 44-foot Mason sailboat in Harbour Town, and later Shelter Cove, before selling it.

"I really didn't like storms. I liked making port, rather than sailing, and hanging out with all the other sailors in the bars," said Chris.

With sailing out of her system, Chris took a job as an accountant, before buying the business in 2000. "She's (Chris) just amazing," said Eva Sicvol, an accountant and close friend of Chris' who joined the firm nine years ago. "She's always stretching herself and I think that's a great thing. Some people are happy with their niche. She takes leaps and bounds."

Most recently, Chris' latest obstacle has been adjusting to her right leg, which is now one inch shorter than her healthy leg. She needed hip replacement surgery on her healthy leg, which she wore out due to so many years of activity. She now walks with a more noticeable limp and must wear a lift in her one shoe. But Chris takes it all in stride. "The shoe repair guy loves me," she said. "We're on a first-name basis. I'm a quick 90 bucks every time he sees me."

UP CLOSE Family: Lili Ouimette Education: Undergraduate degree in Russian Literature at UC-Berkeley; Law degree at University of San Francisco; Masters in Law and Tax at New York University. Interests: Swimming, yoga, reading. What's the last book you read? From Plagues to Miracles by Robert Rosenthal. What are you reading now? Never Forget to Laugh by Carol M. Howe. Of all the places you have sailed, what's your favorite? "I loved Bermuda!"