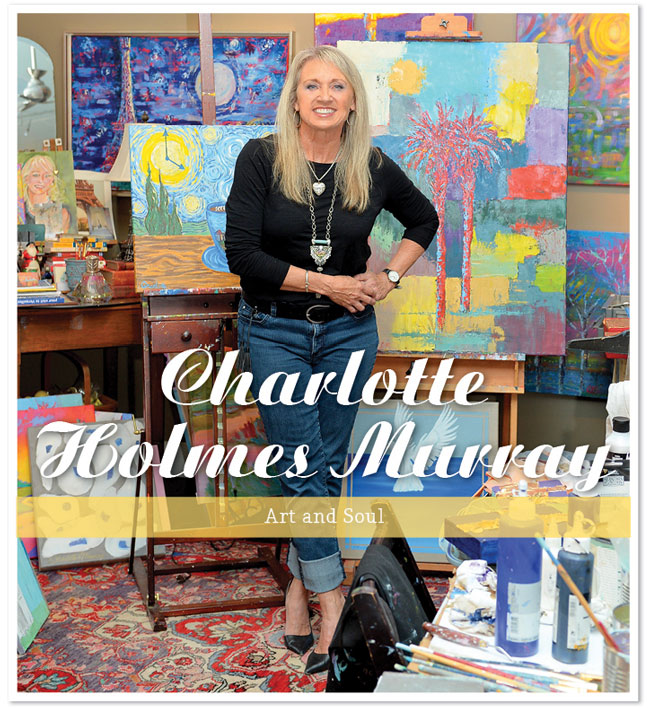 Charlotte Holmes Murray has an amazing studio. It’s outside the city limits of Yemassee, SC, up SC Highway 68, over the railroad tracks, past the tiny Baptist church, down a dirt drive, and then poof! You’ve stepped into a magical place.

Her husband David, who is a master builder, built it for her. It’s a garden, cloister, party place, library, gallery, classroom and working studio all wrapped up in one. There are major themes in her works, each grouped together: Tickled Pink in Paris, Orchids, Nests, Broken into Beautiful, Happy Palms and Lowcountry Oysters, just to name a few. Her paintings are big, covering huge amounts of space, and even mounted on rolling display carts. And they are colorful! Pink and orange, green and bright yellow are everywhere. There’s also a sweet blue heeler dog, a dripping fountain out front and a piano.

Many of her paintings are based on scripture verses or words from hymns. Faith is a driving force in Charlotte’s creations. The name of her studio: Studio 2911 is named for the verse in Jeremiah, chapter 29, verse 11, one of Charlotte’s favorites: “For I know the plans I have for you declares the Lord. Plans to prosper you and not harm you, plans for good and not for evil, plans to give you a future and a hope.”

Charlotte grew up on Hilton Head Island in its early days, when they never locked doors on North Forest Beach Drive, and she could walk on the beach, often all by herself. Her parents are Paul and Judy Holmes, who had one of the first landscaping businesses on the island. She was the first female lifeguard hired for the summer at Coligny Beach.

She was a cheerleader at May River Academy, and went to college in St. Augustine, Florida at Flagler College, housed in the old Ponce De Leon Hotel. Years later Charlotte would make an exciting connection with an artist who had a studio there exactly 100 years earlier. Her three majors were as varied as her many interests—Philosophy/Religion, English and History. She never took an art course! She says “Art teaches itself, you just have to let it!”

When she and David married, they planned to have a dozen children.  David Paul came along in 1988. She was devastated, and very depressed to learn that she would not be having more babies. God had other plans for their family.

Twenty-five years went by. There were good times, and rough times, just as in every family. Just about five years ago she and David applied to be foster parents. Their son was grown, and Charlotte still had the longing in her heart for more children, and she prayed about it, and they were accepted. A little boy, 18 months old and his sister, 3 years old, were placed in their home. Both David and Charlotte were totally unprepared for the many challenges these young children brought with them. Their natural parents petitioned to have them back after six months, and Charlotte grieved for them. By a miracle however, she got the children back from a very desperate situation, and they have recently been granted full custody.

Today, they are thriving and healthy, 7 and 9 years old. David’s next project will be to build them a pool for the summer. She also gained another daughter, when their son married last year, and they are planning a summer cruise together, a late honeymoon for the couple, and the entire family is coming along for fun.

Charlotte began her painting when she inherited a box of paints from her grandmother. She started by painting an orchid, because her son was interested in growing them as a child. She saw a painting of an orchid that moved her so deeply, she decided to just copy it and teach herself to paint. Later, she would learn it was done by MJ Heade, an artist in residence at the Ponce De Leon Hotel, the same building where she went to college. Her painting orchids are a tribute to this long deceased painter. Her first showing was on Hilton Head Island at an orchid show, in the center court of Shelter Cove Mall when she was 40 years old.

A gentleman who stopped by the mall during that first show complimented her work, and gave Charlotte encouragement in her new endeavor. His name was Bob Anderson and he wrote her letters and was “My Theo to Van Gogh,” as she put it. This is the role she sees herself in now, a cheerleader and encourager who can inspire others on their artistic journies.

Her classes are usually six-weeks long, and cover basic color theory, brush strokes, art history, creativity exercises, and most importantly, students complete six paintings. At the end is a gala event, where participants invite their friends and family to Studio 2911 to view and celebrate the artists’ accomplishments.

In all of her classes she unashamedly gives her faith story. She shares quotes, scripture, music, and discusses three inspirational historical figures: David, Albert Einstein and Mother Teresa. She shares inspiration, dreams and particularly, hope, with her students. She believes women have a deep need to a find a creative outlet, whether it be in sewing, cooking, music, painting, whatever. She just wishes she had been able to come earlier into this “cheerleader” phase of her life, but in truth, it is just as God planned it.

Up Close:
Favorite Bible verse: Of course, Jeremiah 29:11, but also I John 3:2 “Dear friends, now we are children of God, and what we will be has not yet been made known. But we know that when Christ appears, we shall be like him, for we shall see him as he is.”

Favorite Quote: “Circumstances may appear to wreck our lives in God’s plan, but God is not helpless among the ruins.” Eric Liddell, Olympic gold medal runner, featured in the movie, Chariots of Fire.

Best time to get ideas: While walking. Charlotte says there’s something about moving your muscles along automatically in fresh air that makes your brain think its best stuff. She also recommends journaling your thoughts every day!

Encouraged reading for all women artists (musicians, writers, whatever art you want to do): The Artist’s Way: A Spiritual Path to Higher Creativity, by Julia Cameron.

To see Charlotte’s work: log onto www.thecharlottegallery.com or for more information send email to This email address is being protected from spambots. You need JavaScript enabled to view it..