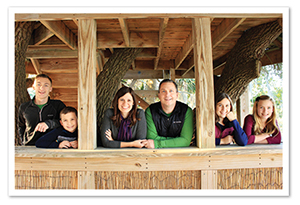 “The only true gift is a portion of thyself.”  —Ralph Waldo Emerson
When Carmen Phillips greeted me, she looked to be a teenager, rather than the mother of four with a wealth of mission work accomplished. Over afternoon tea and brownies, Carmen bubbled about their work and family adventures. It could take days to discover all she, her husband Dale and their four children have achieved in mission fields around the world.
The Phillips chose to incorporate their children in their work, and to accomplish this, Carmen homeschools them. “This gives us the flexibility to travel,” offered Carmen. “It’s also a wonderful education for the children. They learn new languages, experience history first hand and see it come alive. It’s a true blessing.”
Carmen, born in Puerto Rico, and Dale in Chile, met at church after their families moved to the United States. “We were passionate about what God had done in our lives, always shared a deep interest in missions, but were unsure how to find our niche,” smiled Carmen, who attended Grace Bible School in Grand Rapids. She obtained degrees in business and Christian education. She and Dale married in June 1995 and moved to Chicago, where Dale attended the Moody Bible Institute and joined United Airlines. Throughout their years with United, Dale in administrative work, and Carmen a flight attendant, “We prayed every day for God to show us where He wanted us to be,” she recalled.
“Options of working overseas together uncovered several possible organizations. We considered the emotional, financial and physical demands in overseas living, so when Dale found Food for the Hungry Organization, we were ready.” 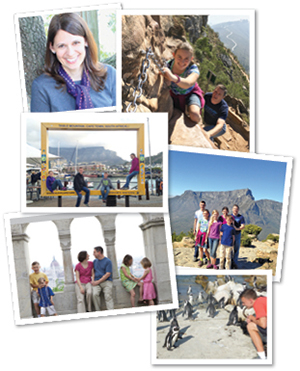 Dale worked with them and in 2002 the couple decided an opportunity in Romania would be a perfect fit for their family, which now included Justin, Carina and Rebecca. After witnessing there two years, they were called to Bucharest in 2004. When Food for the Hungry shut down their operations in that country, the Phillips joined ReachGlobal. “In 2006 Rebecca broke her leg. A visiting physician detected a heart issue in her and told us to have her checked immediately,” said Carmen. “We returned to the US, and at age two, Rebecca had open heart surgery. We are still so thankful that doctor advised us, as she is fine today.” Their fourth child, Gregory, was born in 2006, and a year later, the Phillips gathered their four children and resumed their missionary work with ReachGlobal, this time in Budapest, Hungary. The family witnessed and learned until their return to the US in 2013.
“We accepted a friend’s offer in Chicago to live in their beach home on Hilton Head while we decided our next move. Dale was traveling extensively with teams all over the world, and we kept looking at options where our entire family could be together. We bought a home on Hilton Head to serve as our base, and found a wonderfully open and friendly church home in Hilton Head Presbyterian.”
“We are so proud of our children, as we watch them exhibiting unwavering faith. Our work is funded by donations from churches and individuals, and we often laugh, saying we pay to go to work!” declared Carmen. “As we learned to trust God in our finances, we trust Him in what He can do. We discovered we cannot help or fix some of the mountains we face, but God is big enough to do it. Sometimes we want to give up on a person or situation, and then God does His work.”
On March 9 the Phillips will depart for Cape Town, South Africa, to once again open their hearts and to teach others how to carry on mission work. “The children are as excited as we are, and Justin and Rebecca both wrote papers on what they learned while living in other countries,” offered Carmen. “We had to dispel the assumption that people’s values are the same as ours, listen wholeheartedly and discover what they value. There is a lot of self-discovery in listening to personal life stories and hearing what others’ walks of faith look like.”
Those led into the Christian vocation of mission work sacrifice a great deal to witness in countries desperately searching for light in a darkened existence. They experience not only financial challenges, but also serious health issues, which arise in foreign countries. It requires a strong faith in God and giving Him the reigns. The Phillips are fortunate enough to be living their deepest passions: Meeting the deep needs of the world.

Amazing: Dale has traveled to 92 countries!

Inside Carmen: “I’ve always had the desire to help those who are hurting. Ministering to others means removing our masks, exposing our own brokenness to give a safe haven."

Battle of the heart: I missed the efficiency of the US, but Europe offered a slower pace of living…breathing moments.

The Phillips’ heroes: Those who have gone before us and pointed us to Christ. Really, Jesus is the hero!