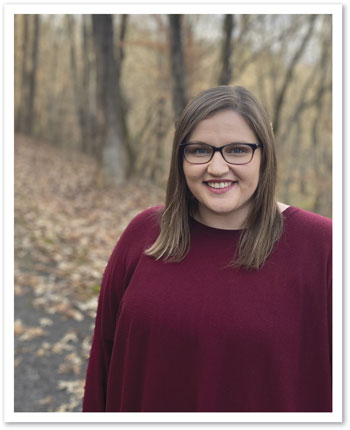 26-year-old Caley Neely had just gotten out of the shower, dried her hair and put on her makeup for work. But something wasn’t right. Her usual headaches had intensified that week, creeping down her neck and persisting no matter what she took for the pain. Now everything was hazy, and she finally asked her husband to take her to the ER.

“I was going in and out,” said Caley, an occupational therapist who works in a hospital rehabilitating people after strokes and injuries. “I couldn’t answer questions or even speak. I just started bawling because in my mind I kind of knew what was going on in bits and pieces, but other times I had no idea.”

Caley had good reason to cry: what was going on was a massive stroke, a bleed so big that they misidentified it at first on the brain scan as a cancerous mass. “It was on the verge of killing me,” she says. “They didn’t have too many options. They could either do emergency surgery that very few people have survived, or they could just let me die. It would have taken about two hours.”

Although it is uncertain why the stoke happened to her at such a young age, one major factor seems to be the use of birth control because the estrogen in it contributes to blood clots. The doctor who performed surgery later said the clot felt like cement, meaning it had been growing for years. Yet somehow Caley beat incredible odds to survive. She lost all strength in the right side of her body and the vision in her right eye. When she started to regain the power of speech, they’d ask her name and she’d say “T-shirt.” Everything came out all wrong. Caley would have to relearn to walk, to read, to live again.

“They started telling my family about our new normal,” she recalls, “that I was never going to wake up and be myself again, that I wouldn’t be able to walk, or be left alone.  But being so young I was pretty determined that I was not going to live like that, and I progressed very quickly. I’m not even six months out from the stroke, and we’re already talking about me going back to work.”

Caley’s job had always been meaningful but experiencing first-hand what her patients go through has made a huge impact. The first time she saw an occupational therapist after her own stroke, she felt devastated because she wasn’t the one giving the therapy. And having always prided herself on being a scholar in the medical field, her difficulties reading and spelling have been incredibly frustrating.
“It’s been hard, no doubt,” admits Caley, who is working on starting a support group in her area to help stroke victims through the recovery and grieving process. “It’s been sad at times, but I have a great support system so I don’t think I would have been able to recover so well without all the prayers that were sent up on my behalf.”

When Caley was in the hospital having surgery and struggling to survive, a prayer chain quickly spread. A prayer map created by a close family friend showed people were praying for her in 39 states and nine countries!

Caley’s faith, inspiration and resolve have resulted in her being asked to speak at numerous churches, invitations she always accepts because she feels that God deserves the glory of the miraculous thing he did for her and her family. The video of Caley’s first testimonial speech has been viewed nearly 11,000 times on social media and the hits keep on coming. Unlike other surgeries she’d had where anesthesia erased all memory, this time she was very aware—and she felt in the presence of God.

“I was praying for him to take me with him,” she says. “Not like I was suicidal; I’ve never been suicidal throughout this whole thing. I just wanted to be in His presence. I’ve thought a lot about near death experiences, and honestly, I always thought I’d be terrified—not of where I’m going, just the process of getting there. But during this I felt no fear, so it’s really changed my perception of death and given me a sense of peace about it. I’m not fearful anymore.”

UP CLOSE:
Hometown: Pineville, KY
Married to: Jonathan, a behavioral and attendance counselor at K-8 school
Serendipity: Jonathan (lived in NC) and Caley (lived in KY) met as interns at Go Tell Ministries Camp in Toccoa, GA. Jonathan later drove 7.5 hours to take Caley on their first date.
Pets: Cat Piper, and dogs Chloe, Lucy and Rhodey
Hobby: Vacationing to places like Europe, Washington D.C., the Caribbean and Hilton Head
Caley loves: to do all things outdoors—hiking, chasing waterfalls, four-wheeling, swimming and much more.
The Big Blue Nation: Caley is a die-hard University of Kentucky Wildcat Fan
Family Ties: Caley’s family (The Brocks) is so large, they have a yearly reunion dubbed “Brockfest” where more than 100 family members gather to celebrate.