On the Rush of Wings 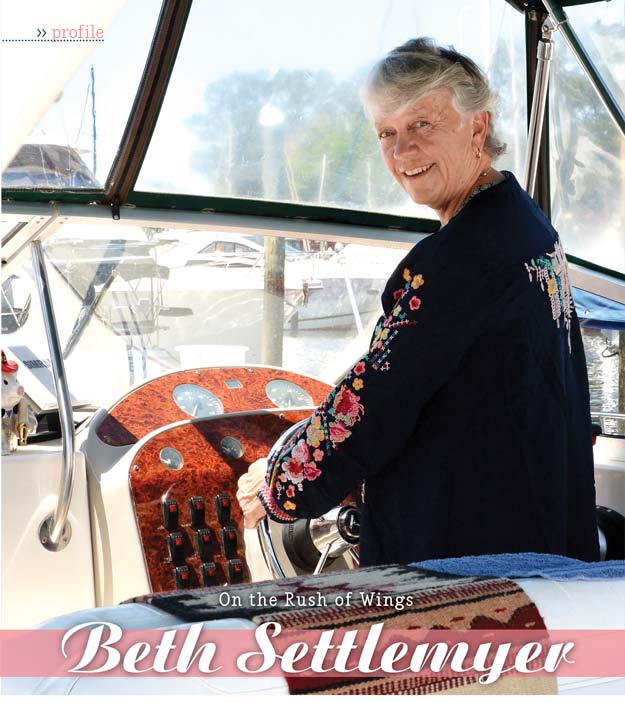 May 2020 Issue
by Jacie Elizabeth Millen
Photography by Christian Lee

After high school, Beth’s father explained to her that flying was “a man’s game,” and she should formally study something else. Beth earned an undergraduate degree at the University of Maryland and completed her graduate work at Dalhousie University in Nova Scotia in wildlife disease management and marine mammal microbiology. Until her dream to become a pilot could materialize, she worked at a zoo for a few years, loving every second, but itching to be in the air. When the pilot school finally started to accept women, Beth was first in line and accepted in the first class at Shields Aviation in Jacksonville, FL. Upon completion, she was hired by a major commercial carrier and flew as a pilot for almost 11 years until she was called to do bigger and better things, which ultimately changed her life.

In 1994, when the Rwanda Genocide broke out, the International Red Cross assembled a rescue airlift team to fly people to safety out of Rwanda to Burundi. The mission called for two to three trips each day, piling 250-300 people into a Boeing 727 aircraft for the 37 minute flight to hope. The planes normally have a capacity of 150 people, but because the Rwandans were in such atrocious condition (with the average weight of males, females and children a mere 60 pounds) they flew many more per trip. “I became so emotionally numb after the first few trips. It’s what you had to do to get through,” Beth said. After eight months of fighting the weather, jungle, guerillas and hardship, the International Red Cross called off the mission. “That experience forever changed my life. I promised myself if the big man upstairs got me back to the states, I would do something more to help people,” Beth said.

And she did. Beth came back to the states and became a flight trauma paramedic trying to keep that promise and make a difference. After 11 years of service, Beth retired from the flight scene even though she would forever hold those memories and love for the air in her heart.

Beth laughed and said, “But you know, when one door closes, another one opens.” Her journey may have been over for flying, but her “wild” side was just beginning. With her forever love for animals, Beth decided to reignite her wildlife degree and move to the coast of Maine where she designed and built On the Rush of Wings Wildlife Center, a wildlife rehabilitation center. With a great team, great resources and water pools with 24-hour ocean water circulation, it was a sea creature’s dream. All animals were welcomed but they specialized in sea birds.

One day a lady brought in a seagull that was brutally injured. They named him Charlie and helped him through a long and grueling rehabilitation. Charlie inspired Beth to write her first children’s book—Charlie’s Second Chance. “I have never seen a bird so determined to fly again like Charlie,” she said. Not to give away too much of the story, but after being injured, Charlie had a will to live and was eventually healed with love from the rehabilitation center. In Beth’s eyes, his story was the perfect example of the circle of life, the theme for her book. “Life is a circle and we have to maintain it. Take a necklace of beads. If it breaks, what happens? All the beads fall and go everywhere. You can’t put it back together and you’re never going to find every single bead that fell off. We have to maintain it, so it doesn’t break,” Beth wisely added.

Beth’s believes firmly in Abraham Lincoln’s philosophy: “Teach the children so it won’t be necessary to teach the adults.”

“I wish this book could be in the hands of every single child in the world, to learn from it, and I think my life would be complete.”

Beth ran the rehabilitation center for almost 10 years then decided that chapter was to come to an end. She credits never marrying for her freedom to move about and experience all the things she has. She has always placed herself at the helm, whether it be in a cockpit of a plane, the director of a rehab center or at the helm of a boat—she has owned and lived on her own boat twice. Beth is comfortable at the helm, and her life is a reflection of that. She describes her life as a bit unusual, but she has made a difference—often a life or death difference—for thousands of people. Beth has always steered the direction of her life, usually straight into the winds of humanity.

Up Close:
Once in a Lifetime: Beth was a bicyclist in the GTE Big Ride Across America, which started in Washington State and 45 days later, finished in Washington D.C. “I would never do it again, but it was so worth it.”

What’s next: She is ready to start writing her memoirs. This will be a riveting book!

So excited: Beth has been tapped to be a member of the Sea Turtle Patrol for HHI. “It’s like the icing on the cake of my life, I love it.”

Buy the book: Charlie’s Second Chance and a plush toy of Charlie is available at Island Child, Village at Wexford, HHI and other booksellers.