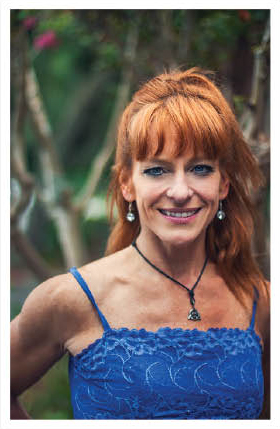 Boudica (Boo-dik-ah) was a Celtic mother of two and wife to the leader of an Iceni Tribe around the time of 65 A.D. During this time, her husband died, and as an independent ally to Rome, he left in his will that his property be divided equally between his family and the Roman state. Rome, however, did not comply. After brutalizing Boudica and her daughters, they demanded the right to her land. Boudica then proceeded to gather British troops and defeat more than 70,000 Roman armies. In her time, this was unprecedented. With women's rights merely a wishful thought, she restored to her daughters a sense of empowerment and justice, and until her death, she was an amazing model of female strength.

Enter Bernadette Gannon. One thousand nine hundred and forty-eight years after the queen warrior's reign in a land far, far away, she arrived at a local coffee shop to tell me her story, and I esteemed her the modern day Boudica. Besides the visual certainty that she resembles what I envision the Celtic tower of strength to look like-bright red hair and a unquestionable amount of physical strength-her gratitude for the rights she has as a woman in America molds the way she teaches and empowers women and young girls today, along with her 16-year-old daughter, Shannon. In fact, she told me that why she admires Boudica so much (I had never heard of her until I met Bernadette) is because she was a faithful mother, a loyal wife, and a woman who still managed to be incredibly strong, both physically and emotionally. It's important to Bernadette to remind those whom she teaches to be grateful for the rights they have, and to tap into the power those rights provide.

You might be surprised to know that Bernadette is not a native to our local, island-hopping lifestyle. In fact, she moved here July 10th, just a couple of months ago, all the way from Capitola, California! When I asked her why, tears filled her eyes as she told me about her mother, who, when they had talked about future plans, placed a gentle hand on Bernadette's cheek and said, "Go find your home." Her mom passed this summer, and from the tears in her eyes and the hand on her heart, I could tell that Bernadette was very close to her. When I asked her why she chose Hilton Head, she smiled big and said, "Well, when I came here it was warm, green, and felt like home!"

And her new home provided work very quickly! Bernadette now fills all of her time as a fitness instructor at Lava 24 Fitness and teaches acrobatics and ballet at the Bluffton School of Dance and Performing Arts. She has maintained a high level of fitness her entire life, beginning acrobatics at the age of five! This includes things you would expect to see in Cirque du Soleil, like contortion and hand balancing. As of right now she teaches ages five through 17, and begins much of her training with the power of positive thinking. "As I see it, there are only two ways of thought," Bernadette began, "negative and positive. Negative ways of thought say, 'I can't' and 'What if I fail?' and positive ways of thought say, 'I can' and 'I can see it' and 'I can do it'. You can only think one path of thought at a single time, so the choice is yours." For her, this is an important step in empowering young girls to achieve their dreams.

Bernadette's positive thinking has influenced her life in profound ways, like recovering from a double Achilles rupture in 2008, to performing in America's iconic Nutcracker ballet, to performing acrobatic motorcycle stunts, to moving all the way across the country, completely by herself! She is not one to limit herself. There are so many valuable lessons and insights we can gain from Bernadette, our modern day Boudica, but just not enough space to write it all down. I guess if you want to learn more, you'll just have to invite her to a cup of coffee yourself!

UP CLOSE
Something Special: She wears a Celtic knot on a necklace that means "everlasting life." She bought it after her mom passed in May.
Bucket List: To visit Ireland. Her heritage is there and she's never been!
Something Funny: She has a special ringtone on her phone that makes the noise of a magic wand swishing by. It went off while we were talking and she said, "Wish Granted!"
Something Profound: During our interview she said, "You only get one chance for a second chance." She was stressing the importance of getting it right the second time around!