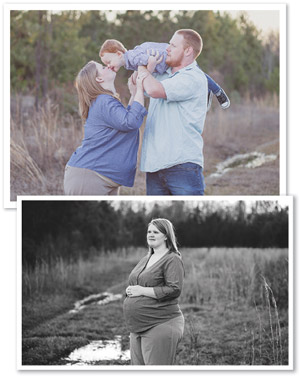 “Sometimes you will never know the value of a moment until it becomes a memory.” ~Dr. Seuss

Young, happy, fun, imaginative, passionate and charming. That’s how the Alford family describes their daughter and sister Ashley Young Melton. Ashley was suddenly taken away from her family and friends just one week after giving birth to her second baby, Adeline. Leaving behind her young husband Chris and her 2-year-old son Liam, Ashley was only 27 years old at the time, and by all accounts, healthy. Her family was shocked to learn she died from Peripartum Cardiomyopathy (PPCM). They were even more stunned to read the statistics and find out PPCM does not have to end in death. If Ashley and her family knew the signs of PPCM, she could be here today warning others.

Peripartum Cardiomyopathy is a form of heart failure that happens during pregnancy, or after giving birth. It is also known as a form of Dilated Cardiomyopathy, which can happen to anyone. Although it is rare, PPCM may be difficult to detect because symptoms of heart failure can mimic those of third trimester pregnancy, such as swelling in the feet and legs, and some shortness of breath. More extreme cases include severe shortness of breath, low blood pressure, increased nighttime urination, swollen neck veins and prolonged swelling after giving birth.

People were drawn to Ashley as she was a shy, but witty, compassionate woman. Above all, she was extremely passionate about her family. Her mother was her best friend and confidant, she had been inseparable from her husband since they were 12 years old, and she shared a bond with her sister that only comes from being close siblings. But the love she had for her children was immeasurable. Her life revolved around them until the moment she died.

On Ashley’s last day, she was making her son’s health a priority. Liam wasn’t feeling well, and Ashley thought he was coming down with a cold, so she took him to the doctor with her husband. Ashley wasn’t feeling well either, but like many mothers, she put her health on the backburner. Later that day, her husband found her unresponsive in their backyard.

Ashley’s symptoms of PPCM included swelling, shortness of breath, difficulty breathing, tiredness and chest pain. Ashley did not think her symptoms were life or death. She actually thought she was just tired from giving birth, the new baby and being mom to a toddler. Looking back, her family says the signs were all there, but there was no education about this rare condition.

“Not only us, but her doctors were floored that she had passed away from heart failure. We had never heard of peripartum cardiomyopathy, and we were even more shocked to find out it was caused by pregnancy,” her sister said. “We did as much research as we possibly could and were even more shocked to read the statistics and find that it is a treatable disease that does not have to end in death.”

In fact, with early recognition and treatment with the proper heart failure therapy, many women with PPCM can return to normal heart function in the first year. But it must be detected early, and an echocardiogram is the only test that definitively diagnoses heart failure and the severity of the left ventricle dysfunction. Echocardiograms are usually given when there is high suspicion of heart failure so that is why it is important to talk to your healthcare provider if you feel something isn’t right.
Ashley’s family hopes by sharing her story, they are saving lives in the community. This year, they will be walking in Ashley’s honor at the 2018 Palmetto Heart Walk on May 28 at Shelter Cove on Hilton Head Island. They are constantly talking to people, especially expecting mothers about the signs and symptoms of PPCM.

“It’s important to walk because we want not only to honor Ashley, but to spread the word to as many people as possible. If we can save one mother’s life, all of our efforts and Ashley’s death would not be in vain. We walk not only for Ashley, but for all mothers. We want mothers to live longer, healthier lives.”

Peripartum Cardiomyopathy (PPCM) Symptoms:
> Shortness of breath and coughing that generally occur at night (Paroxysmal Nocturnal Dyspnea)
> Difficult or uncomfortable breathing on exertion (Dyspnea on exertion)
> Coughing
> Shortness of breath when lying flat, causing the person to have to sleep propped up in bed or sitting in a chair. (Orthopnea)
> Swelling (edema) above and below the knee
> Abdominal pain or chest pain
> Palpitations—awareness of heart beating
> Pink sputum (phlegm)

About the Palmetto Heart Walk: The American Heart Association will hold its annual Palmetto Heart Walk on Saturday, April 28 at Shelter Cove Community Park on Hilton Head Island. More than 700 supporters and survivors are expected to attend and raise funds to support cardiovascular research and education. The Heart Walk raises awareness that walking 30 minutes a day greatly reduces your risk of heart disease and stroke, which are America’s No. 1 and No. 5 killers.
The Details: Activities start at 8:30. Walk starts at 9:30. 5k Run starts at 9:30. Registration for the walk portion is free. The 5k is $30, and participants receive a 5k shirt and medals are being awarded.
To Register: go to PalmettoHeartWalk.org